Here’s the kicker: the Hue bridge won’t pair with them, with or without ST.

So either they’re not ZLL certified and don’t know the secret handshake (in which case ST might become able to pair even if Hue bridge can’t) or they’re using the no color temperature tunable device type instead of the no color dimmable device type. (ZLL has a lot of different bulb device classes. )

Or both of the above are true.

Anyway, I wouldn’t expect them to work with ST yet, but if someone knows different, let us know. @tyler , is ST supporting all ZLL device classes, or just some?

CNET has a detailed comparison with other brands.

Osram's Lightify LEDs might be the best smart bulbs yet

With a killer color-tuning feature that you won't get from Philips Hue Lux or Belkin WeMo, Osram's new smart bulbs look like a smart play.

They’re probably just regular Zigbee in which they’ll most likely pair right up as on/off. The Color tuning will need to be added though. Where are they available?

Says they use home automation protocols in the zigbee.org release announcement.

I really like their Gardenspot option, and they offer color strips too. They’re all pretty expensive though. A Phillips Hue copy cat based on prices and style.

They’re probably just regular Zigbee in which they’ll most likely pair right up as on/off. The Color tuning will need to be added though. Where are they available?

Why do you think the Hue Bridge can’t find them? (This has nothing to do with ST, it’s in the cnet article.)

The bulbs are available now from Amazon, the starter kit is still pre release although they’ve been sending them to mainstream reviewers for about a month. 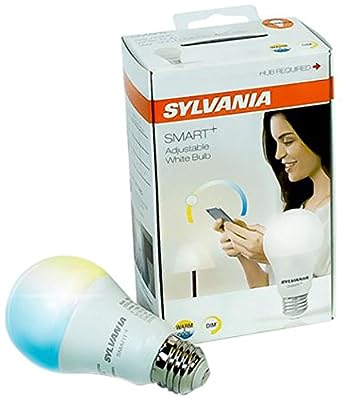 Connect your Sylvania LIGHTIFY ZigBee Adjustable White A19 LED light bulb directly to your compatible ZigBee smart hub and bring your smart home lighting experience to the next level. With adjustable ...

I wouldn’t trust cnet on the compatibility. They couldn’t get the Cree bulb to pair with ST in their first review, and the users here got it paired and working in no time.

I just bought one from Amazon, so Tues night I should be reporting back here. $32 is pricy compared to the Cree and GE Link, but I’m intrigued by the color temp adjustment.

@wackware was right. Paired right up. It defaulted to a SmartPower Outlet, but I changed to the new ST Cree Bulb type and on/off/dim works.

It’s using the HA profile and I think endpoint 3. Same clusters as any of the zigbee bulbs plus color. There are a couple of manufacturer clusters in the raw description too.

Hopefully tonight or tomorrow I can find the time to modify the devicetype for adjusting color temperature. Nice little bulb though. Very compact.

I’ve never seen FC0F before in a zigbee device.

I tried poking around at other commands/attributes in the color cluster, but nothing was working. Any ideas?

Do they have any doc on their expected command format? Or, does it just say “we do zigbee”?

It’s a ZLL bulb with temperature adjustment, if that helps. Should be 0x0220 for the device class, I believe.

This is yet a different device class than the GE Link (noncolor dimmable, not temperature adjustable) and the Hue (color).

As far as clusters, I think you’re looking for a level adjustment, not a color adjustment in ZLL. I can’t remember how that maps to ZHA.

And I have no idea how the ST device handler normalizes it.

I can’t find any technical documentation online other than it should work with any zigbee certified hub. I tried using the format in the zigbee spec for color temperature (1000000/colortemp in kelvin). The default value I read from color temp field is in that format and matches the default in the spec.

It’s a ZHA bulb, not ZLL. You can see this in the raw description I posted above. 0104 profile for ZHA, and 0102 device for color dimmable bulb.

According to the manufacturer, the bulbs themselves are ZLL certified.

All ZLL devices are supposed to be controllable to some extent by any ZHA controller, which is why you see mentions of ZHA throughout the marketing literature.

This issue goes away in the future for new devices once Zigbee 3.0 folds in multiple standards together, including ZLL and ZHA.

But for now, things can get tricky.

Figured out the issue. I had to reverse the Endianness of my payloads. I thought ST’s implementation of zigbee handled that part of the formatting. I haven’t run into this before because except for TransitionTime, all the payloads have been a single bit (byte? I always forget). Once I took advantage of the swapEndianHex() function, it started working. Pretty cool range of color temp.

I just need to tackle the parsing for color temp, then I’ll post the deviceType. Anyone know how to dynamically change the color for the ‘on’ status? I’d love for it to reflect to some extent the current color temp of the bulb.

Congrats! Those can be really hard to find.

I bought 2 of those GU10 Lightify bulbs.Do I need the OSRAM hub or they can be paired from ST hub?
I published your device type but cannot find anything.

I paired the E27 bulb directly with the ST hub, so the GU10 should do the same. It was an easy pair too. Just turned bulb on, then used ST to search for a new device. Do you have any other zigbee bulbs paired already?

The device-type should work for the GU10 version just like it does for the E27 too because they have the same features.

Unfortunately nothing.I have done the following:
-I have one on/off switch that controls 2 GU10.I put only the one,scanned nothing.Restarted hub,scanned then nothing.
-I went to another room which has 1 switch that controls another 2 GU10 bulbs.Different fixtures,did the same and nothing.

I have published both yours (Sticks18) and Cree device type but nothing.
Moreover I don’t have an OSRAM hub but I read it’s not necessary.Right?

The ST scan doesn’t find anything? Check your zigbee firmware in the IDE. It should be 1.5.4, and you can email support to get it pushed to your hub if need be.