Device Handler for the cheap xiaomi zigbee plug. Since it does not pair automatically with SmartThings, you’ll have to add this device manually by using its Zigbee Id and Network Id. You can get Network Id from ST Hub. For Zigbee Id, you can get it from Xiaomi Hub/Gateway (there could be other way to figure out the Device Id). For less than 10~15$ usd, you’ll get a Zigbee Outlet and a temperature sensor.

Edit : You do not need a Zigbee Device ID for it to work. 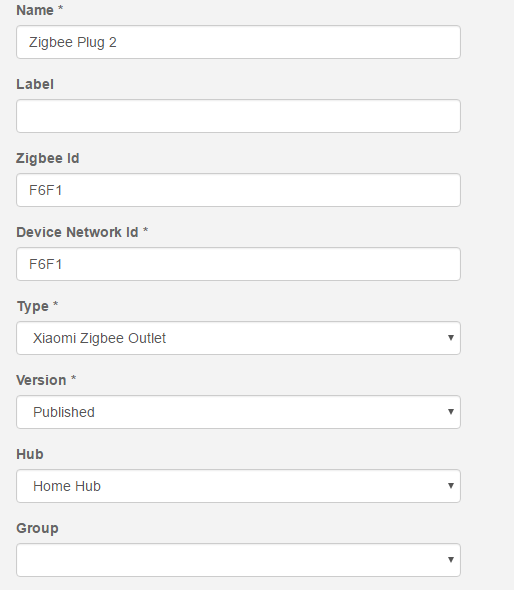 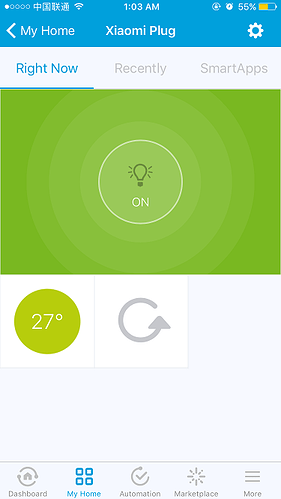 Can you clarify, you have network ID in step 5 then Device ID in step 6.
In IDE for a New Device there is Zigbee ID & Device Network ID.

It needs to be unique i think. For me, i put the same as Network Id in the Device Id field

Thanks just wording is what i wanted to clear up “Zigbee ID” vs “Device Network ID”, you have “network ID” & “Device ID”

lol, thanks! i’ll fix that

Just wanted to confirm that this worked for me, one of my Temp sensors that was having trouble connecting worked with this method right away!

I don’t think they will work. It will mainly works with 220v i think. But you can try to google it for it’s spec. Speaking of voltages, I bought a bunch of Cree bulb from US last month and only realize they were rated 110v. So now they’re gathering dust…

My outlets arrived today. Will start using them as zigbee repeaters for the Orvibo door/window sensors. Then i’ll let it rest for a few days and see if they still work. (And report back here)

Edit1
Took a few tries to get them paired but it worked. The range seems ok (not very good), but the repeating range seems limited. Will investigate further.

Edit2
Switching the plug manually, with the button on the plug, does not always change the status in the app, not even after a refresh. It does not check the actual status at all, this is a bit against the whole idea behind zigbee/zwave

Edit3
Switching the plug manually on the plug does not always trigger a routine, just like the status update.

I have tested this before. Turning on a plug manually will update ST. Turning off will not. You’ll need to use the refresh button to wake the device

However.
After a day of testing i can already report these plugs are not reliable as repeaters. The Orvibo Door Sensor lost its connection completely. (Light didn’t come up)
For me these have no use.

Since i cannot find any decent Zigbee repeaters i’m thinking of abandoning Zigbee and move completely to zwave. It’s more expensive, but also more reliable (too bad for the Orvibo sensors, they seem pretty good).

Edit
My other plug lost connection completely this morning, could not turn on/off.

Before you give up on this, you could be facing the same problem as my Xiaomi sensors whereby they were not fully pairing properly. The outlet dropping off and not repeating properly might be the result of this.
On the sensors, after pairing I continued to click on the reset lots of times. It seems to have done the trick and make the sensor stay connected to ST overnight for the first time. Could you try something similar here?
I’ve got a bunch of outlets on the way, hoping to get them working in a similar manner.

I added the plugs without the zigbee-id. Since i also have the xiaomi-hub i might give it another try with the zigbee id.
I also don’t have any temperature, it’s just –

Edit
I tried to setup the xiaomi hub, but no idea how to connect to it from the app, it cannot find it, no way to setup the wifi credentials. Directions are in chinese.
Found the directions in english, but nothing about setting it up.

I have received my plugs 2 days ago.
I paired them but still don’t get temperature at all. On top of that I have run a few tests but it does not seem they can extend the zigbee signal very well.

Temperature will only shows after you turn on the plug for a while. They will show eventually.

Not sure about using the plug as a zigbee repeater, saw some post that someone successfully using that as a repeater. I don’t need one, my apartment isn’t that big

Temp is showing now.
Both my plugs are now showing temp, they didn’t before. Lets see if this helps.

But wouldn’t they start repeating and creating a mesh after a while anyway?

Isn’t it possible to refresh the plug automatically from the hub? Say every hour?

Edit
No luck, one plug dropped again, in just a few minutes

Is the plug turned on? I’m not sure if they will repeat when they’re off.

I gave it some time while turned off.
The temp turned blue without a figure. Then the details screen (right now screen) turned off completely, just a blanc screen. I can still turn it on and off though.

@RInkelk Hi could you please give the link where you bought?

These are from dx
Others from GearBest