I think it may be related to a) temperature

What is a healthCheck()?

I do not think I have ever seen SmartThings provide notification if a device is not responding.

If a battery powered sensor goes completely offline, battery dead or whatever, does SmartThings provide any feedback?

Yes, I know there are community authored apps for this, but what is this SmartThings authored healthcheck() function?

You may have noticed over the last few days that you are seeing new device statuses for some of your devices connected to your SmartThings Hub. We have started to roll out a new service we call “Health Check” to everyone. We wanted to let you know about some of the details of this new service so you know what it is and what it means to you. If your device is showing Online, Offline, or Hub_Offline on graph.api.smartthings.com, you are seeing the Health Check capability, which monitors the connectivity status of a device. We are making the Health Check capability visible on graph.api.smarthings.com to provide a more granular visibility on the state of a device to the developer community. Some troubleshooting of the device or Hub may be required to restore functionality if the device has an…

Thanks, that explains stuff. I am comparing my graph/ide to this explanation and see those statuses.

And look one of my osram garden spots has gone AWOL, offline! 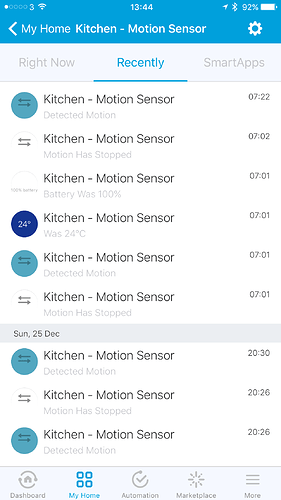 Now misfires are back in full on misbehaviour 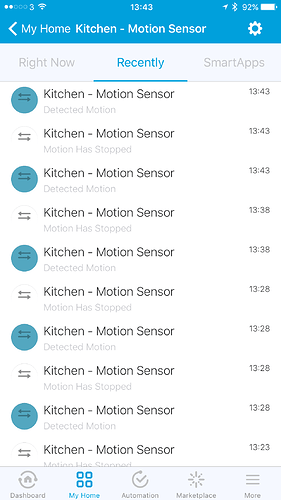 Is anyone interested in ST motion sensors in the UK? I am about to rip them all out and replace them with Fibaro sensors - might even switch to the complete system thinking about it as I am tired of these issues and ST not getting a handle on them. If you are intereted in sensors please PM me.

@r4nd0m What brand batteries are you using? At present, this (combined with the 5-minute reports) is still the best theory we have on why this is happening for some users.

To add some more meat to this, here are some facts based on details of the hardware and observations we have made:

@tpmanley and other team members have been discussing different ideas for how we might address this problem. I do think that there is something different with your batteries as compared to most users that is exacerbating this issue. In addition, the multiple false motion triggers will, of course, drain the battery even faster.

I, of course, cannot guarantee that this is what is affecting you but based on the information you have provided and our own observations it seems like a plausible match. We are continuing to do some research to confirm a few parts of our root cause analysis.

Thanks for the information @posborne. What would be great is a way for us to enable/disable or at the very least adjust the health check interval. This should give us a bit of a respite from the false alarms we’re getting. I have been able to confirm for some time now that all of my false alarms occur at or just after a 5minute report.

Evergreen batteries I got from battery source fit perfect. I can’t comprehend the size difference for the same type of battery. It’s would be like some AA batteries are shorter then others.

My sensors are sold mate, wont be an issue for me from here onwards the replacements are working perfectly fine in other areas of the house already and I expect the true replacements any minute thanks to amazon prime so I dont expect any trouble here to be honest …

Some points to note - I have a case open with support on checkinterval going from 720 to 7260 seconds for certain sensors which then leads to them being stuck in open/close/active/inactive and eventually going offline. Support was not very helpful on this and had no idea on checkinterval issues. After the firmware update these issues probably worsened which led me to resets. etc detailed in my links above. The offending sensors shipped with LIXING batteries, however switching to panasonic after the issues has not helped. Putting lixing batteries into working sensors screwed them up as well. However now after the full reset and rebuild, things seem fine. Did have an osram led bulb in my network, which I got rid off before the rebuild!

disabled OTA and all seems to be fine again… guess i’ll leave it off… if it works, don’t fix it eh…

They won’t work while they are updating.

I have had ST replace a motion sensor that went faulty after this upgrade.
All has been working well but reading the reports in this thread I decided to disable OTA to see what would happen.
Oh dear. Since then the new motion sensor has either shown permanent motion or fails to detect motion.
I have tried resetting the sensor numerous times.
I have just reset again and enabled OTA to see how things go now.
Happy days.

Well hmmm… I have also disabled OTA per the suggestions and am continuing to have all my ST ZigBee devices get “stuck” reporting. I haven’t tried re-enabling OTA as I was getting so many false positives that way.

However last night was a real doozy. We had multiple false positives that the lights in the house made it look like a disco and the garage door kept sending SMS texts.

With the fact that the z-wave devices have started acting flaky now as well, I’m at a loss of how to salvage the hub. Even when the timer was sooo broken and states were being lost the hub was still a bit useful as it would still control local activities. This is beyond what anyone is willing to put up with.

It isn’t all just batteries. I have several screw in light bulbs that are ZigBee that quit responding as well.

In my ST motion sensors, of which 10 very routinely get “stuck” or give false positives, the batteries are all what came with the ST device. It isn’t only those 10 devices that are having problems they are just the most troublesome. The other 10 or so ST motion sensors will occasionally give a false positive or get stuck but only about once every 2 days as opposed to every few hours.

I have noticed that when I set the mode to good night, it will trigger a false positive from 3 sensors every single time. Those are the tilt sensor on the garage, and two of my bathroom motion sensors. I haven’t actually put a stop watch to it, but it appears to be 1-2 minutes after the mode change that it triggers the sensor…

Wonder why this is isolated.

Oh well.
The ‘new’ ST motion sensor supplied by ST to replace my dead one is now dead as well.
I have tried changing the battery, removing it, re-associating etc. etc. and it is now a paperweight.
I did vow never to buy any of these again 9 months ago when I had issues but I relented as a newer version came out. Oh how wrong I was.
Top of my list for motion sensors is the Phillips Hue. Does Motion/Lux/Temp. Same dimensions as the ST.
2nd is the golf ball. The Fibaro Motion/Lux/Temp sensor.
Followed by the Orvibo. Works OK but I do not like the look of it. Just me.
I will not bother to contact support with the dead motion sensor as I do not want another one. Just put it down to experience.