FAQ: Why can’t I use Geopresence or an Automation to set the alarm state in the new (V3) app? (Updated 1 November 2019–now you can!)

After getting mad at ourselves for again setting off the intruder alert, for the second time in 2 days, I looked into the Classic App for a possible solution. There I find that I can automatically turn off or on the alarm mode when the presence sensor arrives or departs. Why can’t I set an automation like this a the new App?

1 Like
Automating Smart Home Monitor?
Automatically arm smart home monitor
SmartThings Home Monitor doesn't work like Old app for mode changes
Using SmartThings As An Alarm/ Security System (UK)
How to Disarm SHM via Keypad?
Smart Home Monitor arm and disarm
Want lock to lock over night - Schlage - automation- routine-schedules
Perform Goodbye when SOMEONE leaves?
Getting Started with SmartHome Monitor - which version
Looking for alarm panel suggestions
Hub not recognizing armed or disarm status in automation settings
Unlocking door with geopresence?
FAQ: use a button controller to turn on a virtual switch to run a routine to change SHM alarm state (SmartThings Classic)
Door Unlock Automation? How do you reduce security risks?
Can't setup automation for Yale lock to unlock "When I arrive home"?
The untold story of Google I/O 2019 - The irresponsible attempt to kill "Works with Nest"
I used to be able to use the fob sensor to run "Arrive" scene when coming home
Way to add shortcut to automations in new app? (V3 app)
Need help with custom automation in new app
Why does St Home Monitor option not active under add automation
Best way to unlock Schlage smart lock?
JDRoberts April 29, 2019, 2:53am #2

To be honest, we don’t know for sure, but we do know it’s not just a missing feature as it’s been that way since the app first came out for over a year.

They appear to have changed their design philosophy for smart home monitor.

Now they only let you change the security.mode by Opening the app and doing it intentionally. You can set up an automation to give you a notification to remind you to do it, but you can no longer create a rule to change the state itself automatically.

In the classic ( V2) app, you could change the smart home monitor armed state using any trigger event at all that smartthings could recognize.

That’s actually fairly uncommon, and quite a few security companies, including ADT, prefer the more manual method to make sure people don’t accidentally set it one way or the other without realizing it. And it looks like Samsung has now adopted that philosophy.

So, yes, you can do this with the Classic V2 app, but remember that they have also told us that that app is going to go away eventually, they just haven’t said exactly when.

If you are using the newest app, the V3, there’s just no way to do it.

There was a new update and you can now automate unlocking a lock. But not change SHM mode.

I have been avoiding the use of the Classic App since I started but now I just have to. I also now can change the alarm status with my front door lock. Unless Samsung comes out with a Keypad or Automation in the new App I will stay in Classic.
In the past Samsung has aggravated me with other technology that doesn’t do what you want it to do and it seems that they don’t care what the consumer wants. Shame on them. We are old IRIS users and things were great. We didn’t know how good we had it.

They could solve the whole thing via a specific in-app switch to turn that feature on (it would be off by default), and a few explicit disclaimers for those who are choosing to activate the feature.

But that would be too user-friendly, wouldn’t it.

At CES 2019 they had a display with a SmartThings branded keypad and some kind of access button. Obviously neither is hands-free, and there’s no telling when they will actually come to market, if ever, but it looks like that’s going to be their approach. 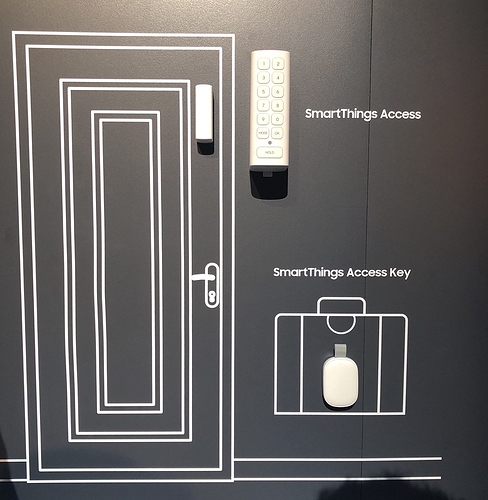 I have been avoiding the use of the Classic App since I started but now I just have to.

And when do, then you’ll open up the potentials that SM offers and not the crippled crap they are pushing with the new platform.

I have seen this posting and it does show hope. Can’t wait for it to appear as a device, it would for me fix all my concerns.

I have seen this posting and it does show hope. Can’t wait for it to appear as a device, it would for me fix all my concerns.

You never know with CES announcements. Smartthings has done some in the past that never came to market or never got out of beta. But at least it shows they are thinking about the device class.

Also, if you haven’t had time to read the specific differences thread yet, presence created in the V3 app is not available to webcore for any purpose.

Also, if you haven’t had time to read the specific differences thread yet, presence sensors created in the V3 app are not available to webcore for any purpose.

Not sure what you mean by this. Mobile presence or the arrival sensor or some custom presence device?

Also, if you haven’t had time to read the specific differences thread yet, presence sensors created in the V3 app are not available to webcore for any purpose.

Not sure what you mean by this. Mobile presence or the arrival sensor or some custom presence device?

Just going by the following, but maybe I misunderstood it:

I don’t think that’s true. I’ve created mobile presence via the new app and have been able to add it to webcore fine.

The automatic arm/disarm of SHM is such a killer feature for our home that it’s the first thing I talk about when I recommend SmartThings to people. If it isn’t available in some form when they retire the Classic app, that will be the thing that forces me away from SmartThings, immediately and permanently.

This was a major part of “home automation” for me and is how I was selling it. Now that it’s not here anymore, we are moving away from the automation part which is going backwards. I fail to understand why the option wasn’t carried over for those who want to do this. It was great that with geofencing my alarm was arm/disarm and doors lock/unlock automatically and seamlessly. Now it’s all manual and honestly, pointless. I got into SmartThings to automate my daily tasks but now Samsung is forcing them to be manual? Not good moves.

Has be considering other options now as this is no longer good. Between v2 app and IFTTT, most of my stuff in my house was automated and it was awesome. Amazed many people that came to my home. Now, back to being basic and lame.

Not only is this not practical, but the end result is it forces me to stop using smart home monitor altogether and replicate its functionality in my own automations.

It’s obtuse but i’d rather deal with this on my own than continue being boxed in to opinionated apps where monetization is prioritized over user experience.

We are now using Ring and it is doing just what I want. Changed over to Ring contact sensors and have a fully functional Keypad.