this thread is intended only as a listing of specific differences between the two apps, not for complaints, suggestions, discussions of design philosophy, bug reports, questions about migration, joke memes or anything else. Just individual feature differences. We originally used the abbreviation STSC for “SmartThings (Samsung Connect)”, but that never caught on, so now we are calling it the V3 app since it came out with the V3 hub. The V3 app is changing rapidly, so feel free to edit this as needed.

The official knowledgebase FAQ is at the following link. Read it.

The “how to” official articles for the V3 app are at the following link:

There are a lot of individual official how to articles for the V2 app at the official support site, but you could start with the following link. Look for the ones marked “SmartThings classic.”

If you aren’t sure which app you are using now, here’s the FAQ for that:

FAQ: how to tell which version of the SmartThings mobile app that you have

Community discussion thread for all the various complaints, suggestions, discussions of design philosophy, etc. that you are not going to add to this thread is at the following link:

What’s the difference? What’s the expected rollout to existing users?

if you can’t figure out which app you should be using, ask in the community discussion thread, not this thread. Seriously, this thread is only to be a listing of differences because all the other threads become so overrun with all those other comments that it’s really hard to find just the simple list. So that’s what this FAQ is for.

You can thank me later.

As of this writing, no custom DTHs work with the new V3 app, only the V2 Classic app. So support is telling some brand new customers who want to use devices like Keen vents that they need to also install classic in order to use those devices.

Some custom DTHs will now work with the V3 app, but they may require modification. See the following discussion thread:

I was encouraged by other forum community members to start a topic to discuss which custom device handlers a.k.a. DTH’s will be supported in the new app. (If any ) For those of you that are using the new app, can you confirm any custom device handlers that are working? Below are the ones that I use and am seeking info on… Thanks in advance… @posborne [image] [image] Also, if custom DTH’s are not going to work, Will those devices show up in the new app? Or do I have to exclude them and then add them again using their default device handler?

The “automations” (rules engines) for the two apps are quite different. For example, there is nothing labeled “routines” in the V3 app, it’s just combined in with the other automations. The triggers and events available are also different. And as of November 2019, the rules engine in the V3 app now has a number of features which are not available in the V2 classic app.

If you are using either app and you can’t figure out how to set up a specific rule, it may be that you will need to use the other one. Ask in the community discussion thread.

Scenes are quite different in the new V3 app and the V2 classic. The ones in V3 can include more device types and more settings and can be associated with a widget. Initially scenes created through classic did not show up in V3, but it appears that as of April 17 they do.

Previously, you could not create a location which did not have a hub. However, with the new V3 app quite a few people may have locations without a hub, particularly people who only have appliances.

Classic “Modes” are different than classic “smart home monitor armed states” and that created a lot of confusion.

Hello, I’m brand new to SmartThings, and I’m trying to configure Smart Home Monitor to alert not just on door open/close sensors and motion sensors, but also on certain vibration sensors when it is in the Armed state. I can’t find a way to do that. I can use Custom to make a vibration alert based on Away/Home/Night “modes”, but these appear to be totally separate from the Armed/Disarmed states. Am I missing something?

They are still different in The new V3 app, but they have new names:

Location.mode ( The old “Mode” in classic) and
Security.mode (The old SHM armed state in classic)

The rules engine in the V3 app appears to treat these somewhat differently than classic did as well as just having name changes.

And just to make sure everyone stays confused, the V3 app also offers “secure mode” as a toggle, which has nothing to do with security.mode or location.mode. It’s a technical zigbee feature, previously called “insecure rejoin.”

V3 app FAQ for this feature:

The old FAQ for this feature, which would apply to those using classic even though there’s nothing in the classic app that lets you access it, you have to access it through the IDE.

Grouping lights in The new V3 app is much improved over the 2017 version of classic. In particular, it’s much easier to set up dimmers to work in sync with each other.

quick way to tell which app you are using…

This thread is not the place to argue about whether that’s a good thing or not, we are just listing the difference here. For discussion of this particular feature, see:

Samsung is migrating SmartThings to a new app: “Samsung Connect.” This app requests permissions to access all contacts and files on my cell phone. This is highly intrusive. I have contacted Samsung three times asking for explanations of why these permissions are necessary. Specifically, I asked “Why does SmartThings need to know the phone number of my dentist to turn on my kitchen lights?” In each case I have received a nonsensical reply. Here is how Tony responded a few days ago: “Contacts are a permission the app asks for because it wants to verify user information for the app as well as save your login credentials.” Huh? That makes no sense. How, exactly, does the Samsung Connect App use my contacts to verify my user information? I don’t think that information is even in my contacts l…

Originally There was no tablet version of the new V3 app , you could not even download it on a tablet. However, @prjct92eh2 notes below that as of 20 April at least the newest iOS version can now run on a tablet.

Classic will run on a tablet.

Bixby (Samsung’s voice assistant) works with the V3 app but does not work with classic. Samsung would like you to use this a lot. The Bixby features are only available on some Samsung galaxy phones.

For help with Bixby, contact Samsung support, not SmartThings support: 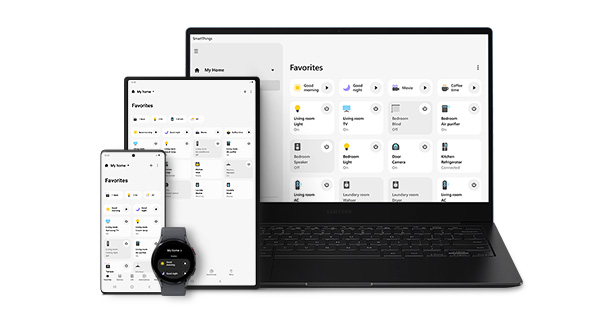 SmartThings is a home automation solution. Control and monitor your compatible devices with one unified remote app and build your own smart home.

The technical team has said they hope to eventually move everything over, but for now, don’t be surprised if support tells you you have to install one or the other app version in order to use a particular brand/model of a device even if it officially “works with SmartThings.”

You can individually temporarily disable automations in the new V3 app. There is no simple way to do this in classic, although there are a lot of different workarounds.

“Cloud Control” is an on/off toggle in the android version of the V3 app. It is not available for iOS or classic.

The V3 app offers much more Control over when notifications appear on your phone, at least for android:

Custom Automations in the SmartThings app

In the SmartThings app, you can build custom Automations to automatically trigger multiple actions, including notification alerts. You can set up Automations to run at certain times on certain days...

Classic allows you to set up widgets for routines on your phone or the Apple watch.

As of this writing, you will need the V3 app to set up the Wi-Fi features on the “Samsung Connect Home WiFi mesh router.” Classic does not give you access to these settings.

Note that this router is sold under different names in different countries.