Z-Wave Switches Mirror Each Other?

I just replaced 2 dumb switches with GE Z-Wave dimmer switches and I’d like to have then set up to turn the other switch on and off when either one is pressed. Is there an easy way to do this?

Install Smart lighting and use the mirror option. To install, tap on Add Routine, tap on the Discover tab and scroll down to find it. After you install it, it will appear on the main Automations screen.

Smart lighting and use the mirror option

Best answer assuming it’s available. Smart Lighting has been region-locked in the past, I assume it still is.

You’ll need to create two routines in Smart Lighting for the mirroring to be symmetric. And there will be a slight lag between the two.

Also worth noting: Smart Lighting is slated to be auto-migrated to … something … when Groovy good away.

It’s available, but I have absolutely no clue what I’m doing with it. I’m REALLY really bad with the software side of smart home tech.

It’s available, but I have absolutely no clue what I’m doing with it. I’m REALLY really bad with the software side of smart home tech.

It appears they updated Smart Lighting. Mirroring is now called sync with switch.

in the Smart Lighting app, tap on Add (+) in the upper right corner of the screen.

Edit: I’ve discovered the new Smart Lighting and currently have both installed.

Interesting. Mine still has “Mirror behavior”. You first select the device(s) that will be controlled, then for “What do you want to do” select “Mirror Behavior”. Finally select the single device which will control the other(s).

So I did that…and the 2nd switch does always sync with the 1st, but not the other way around. So I added a 2nd routine doing the opposite and everything kind of went haywire whenever you clicked either switches. I’m wondering if it’s on my end? I’m going to give it another go a bit later when I have a few minutes.

I’ve had this working with the groovy version of Smart Lighting for years. Both of the switches in the picture are Z-wave and are using the stock “Z-wave switch generic” DTH so they run local in my V2 hub. There’s typically about a half second delay between the time whichever one I switch comes on and the mirrored one. 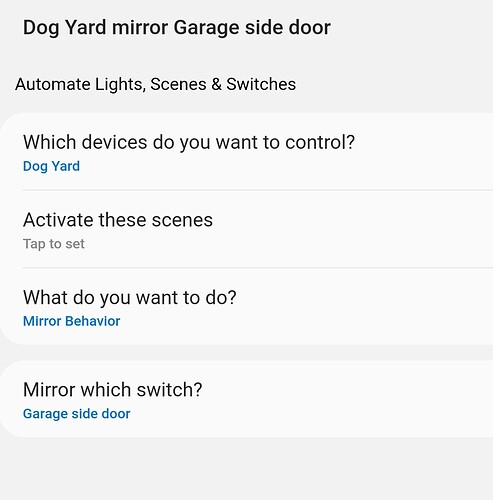 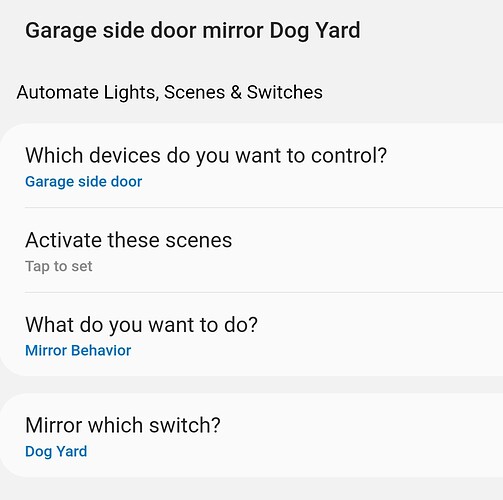 @jkp I have created 2 virtual switches and only 2 Smart lightning routines to sync them, and there is no loop

I don’t need to try it

I have no need for mirroring.

Looks like there is no need for 4 routines anymore

Works fine still. Seems to be about the same delay between the first and synced lights.

Switches I’m syncing are z-wave and are running on stock (local) Groovy DTHs. I’m waiting for auto migration to switch to Edge.

I do this same thing, but with 2 physical dimmer switches and they just have minds of their own. Either one on their own routine will work just fine, it’s when you add the opposite routine that shit hits the fan.

Can I ask what switches you’re using? I’m just trying to figure out why this seems to be working for everyone but me.

I have installed a mix of Leviton, Zooz, and GE/Jasco switches and dimmers.

The specific one I’ve shown here involves two Zooz ZEN26 switches. This seems to be my only bi-directional mirror/sync with two devices.

I have a one-way sync with a GE ZigBee 3.0 dimmer controlling a second dimmer of the same model.

And I have several mirror/sync automations where a have several devices mirroring a virtual device. This is a way of creating groups that are easily controllable by a voice assistant. For example our kitchen has several can lights controlled by three different dimmers. I have a virtual dimmer called Kitchen Ceiling and a mirror/sync automation with the three physical dimmers synced to the virtual.

Do I need “virtual switches/dimmers” for syncing to work?

No. The automation I posted in screenshots above is two physical devices.

What brand and model dimmers are you trying to set up to mirror.

Install @philh30 Edge driver for GE dimmer switches. The driver supports Association groups which allows one switch to mirror its behavior to other switches. Nice thing is it runs locally on your hub so it’s lightning fast vs SmartLighting which runs in the cloud. I dumped all of my SmartLighting routines in favor of ST Automations using his GE Edge drivers.

The driver supports Association groups which allows one switch to mirror its behavior to other switches. Nice thing is it runs locally on your hub so it’s lightning fast vs SmartLighting which runs in the cloud.

Association is device to device, without the hub involved at all. So yes it’s local but no hub in the middle.

GE Enbrighten ZWave Dimmers controlling Enbrighten under cabinet lighting. One switch has one light and the other controls 4.