@nayelyz Can you please give us a status here? It’s been 5 days and this hasn’t been fixed?! Meanwhile new hub firmware was pushed out and this problem wasn’t even mentioned. Is this not considered a priority for the engineering team?? No one with an iPhone is able to install new LAN drivers.

I got desperate and also installed Android Studio, added a Pixel 4 device with Play Store support. installed SmartThings, logged in, then scanned, and it does in fact trigger the scan on my hub. Definitely not ideal but at least I can play with my stuff again.

Can you please give us a status here?

I was in touch with SmartThings Support (nothing to do with beta team), trying to install an additional hub, interestingly my problems also seemed to be iOS based, Support mentioned there was a new version of the iOS coming shortly.

My guess/theory is that the new app will fix this, rather than a firmware release

Thanks for sharing. It was a firmware update that caused issue in the first place, so interesting that the app is where the fix is. I bet there was a fair amount finger pointing internally which contributed to the delay in getting this fixed.

@SamsungZell it’s been 5 days of iOS users not being able to add devices to SmartThings. Why does the status page not reflect this?!

Hi, everyone.
I already pinged the team to get more info about the progress. I’ll keep you updated. I’ll also check more details about the status page

Update:
The team is handling this as a critical issue due to the high impact.
Some of the internal staff are following the progress closely, so, don’t worry about this not being considered important.
As soon as we get more info, we’ll let you know.

For those that have issues adding Zigbee/Z-Wave devices using “Scan nearby”:

Note: The points above are a temporary workaround

If your device’s brand appears in the devices catalog, you can select this option. It seems it is not bound to the brand, so, any similar option found in the catalog should help you.

I have been talking with some developer friends of mine who have been looking into recent Bluetooth issues for other systems. I’m going to pass along what they said just in case it’s relevant to what’s happening with the smartthings app. Could be just a coincidence, but it’s the same timing.

This appears to be a case of Apple saying “and this time we mean it.“

Part of the Bluetooth spec for apple has always defined how the Interval Max and Min would be handled when a Bluetooth device was connecting to the iOS device, but apparently they never enforced it until iOS 16.

Now they are enforcing it, and the result is that some Bluetooth devices, maybe including the smartthings hub, are timing out in situations where they didn’t used to time out.

People who have this problem likely have it over and over again because of the configuration and what they are trying to do. But there will also be quite a few people who don’t have the problem.

Some device makers, like the manufacturers of the Whistle GPS tracker, are fixing the issue by putting out new versions of their apps which comply with recommended practices. others are waiting and hoping Apple goes back to the old strategy.

We are developing a device which communicates with our iOS/watchOS apps via Bluetooth LE and has to stream a lot of sensor data for an extended time period (hours). Everything works fine under iOS 15.x, but we’ve found out that iOS 16 betas (and the RC) changed something in the negotiation process: previously we’ve used 15 ms Connection Interval, but iOS 16 (and watchOS 8) most of the time negotiates 24 ms, which is too wide for our bandwidth. The long connection interval causes packet loss (9-33%), and after 3 failed retries (3x30 sec) our hardware drops the connection.

Here’s a discussion of the fact that the Apple spec hasn’t changed, but the enforcement has.

even if it was in the spec I never saw this behavior during countless hours of testing until iOS 16 and now multiple customers are reporting.

It’s like a township suddenly enforcing a 25 mile an hour speed limit when they used to let people get by with 30 to 32 and now a bunch of people are showing up late to work. But the ones who always drove under 30 don’t see any change. And the street signs haven’t changed. Just the enforcement.

Again, I’m not 100% sure this is what’s happening to smartthings users with regard to adding a new hub or some device discovery, but it might be related.

@JDRoberts what you said makes sense but my wife hasn’t updated to iOS 16. She’s still running iOS 15.6.1 and has the same issue. Again I’m not an engineer or anything this is just an observation.

@JDRoberts what you said makes sense but my wife hasn’t updated to iOS 16. She’s still running iOS 15.6.1 and has the same issue. Again I’m not an engineer or anything this is just an observation.

It’s always possible the smartthings engineers are aware of the iOS 16 issue and that in trying to fix that they broke something else. Or it could all just be a coincidence.

It’s the first explanation I’ve seen, though, of why changing something on the hub Might then affect only a specific subset of phone app users trying to add new devices to the Network. If there’s a timeout occurring between the hub and the iPhone, it would explain why android users weren’t affected.

But again, it could all be a coincidence. I just thought it was worth mentioning.

Hi.
This is working to a degree. Its allowing me to pair my sockets but they are adding and not letting me use edge. I cant even select an edge driver as its not adding as an edge device.
Any clue why this would be?

EDIT.
Hub reset solved this. Sockets all working like a dream

4 posts were split to a new topic: [iOS app] STHM issues with the settings page

As another data point -
I first noticed this about a week ago when a Zigbee device dopped off and I couldn’t re-pair it, then in testing couldn’t re-pair anything new or old as the hub wasn’t scanning.

Glad I found this thread as was otherwise (still are) at a lose-end but sounds like the ST engineers are working on a solution?

Glad I found this thread as was otherwise (still are) at a lose-end but sounds like the ST engineers are working on a solution?

Welcome to the SmartThings Community, @Channelk!
Yes, the engineering team is working on a solution. Currently, there’s a workaround for Zigbee/Z-Wave devices which I shared in this post:

Update: The team is handling this as a critical issue due to the high impact. Some of the internal staff are following the progress closely, so, don’t worry about this not being considered important. As soon as we get more info, we’ll let you know. For those that have issues adding Zigbee/Z-Wave devices using “Scan nearby”: If your device’s brand appears in the devices catalog, you can select this option. It seems it is not bound to the brand, so, any similar option found in the catalog should help you. As the Edge connection is done by default, it won’t be paired with the DTH unless there isn’t a matching driver installed in your Hub or the default channel. In the case of Z-Wave, the option of “Generic Z-Wave” in the tab “By device type” will help you trigger the discovery proces…

Please, let us know if this works for you.

I am absolutely pulling my hair out at the moment. Many (but not all) my sensors are off line some are malfunctionning (I had a smartthings door sensor that registerred vibration but not Open/close) and worse of all I cant seem to reconnect them. With all the changes over the next few months I think this is going to break my smarthome on an almost daily basis. I had a load of Frient motion sensors that all went off line and all my Fibarro door sensors stopped working and I cant reset them.

I have several webcore routines, I use action tiles and have several custom device handlers. I know these are all going away shortly and I feel I have wasted a lot of money and lots of time setting up a smarthome which is about to become scrap metal.

This technology is just not ready for prime time.

I just received a text from the SmartThings Support I was dealing with. They rolled back on the update that they think was the issue that was causing the hubs not to find new devices. I just tried it and it worked perfect.

Here is the text I received 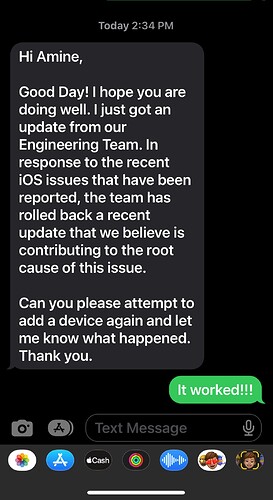 Now this worked for me. They had access to my hub. Hope this helps