Reverting back to DTH after using Edge driver

Hello,
I recently tried an Edge driver for one of my zwave devices (iBlinds) and wanted to revert back to the DTH I was previously using for it. However when re-adding the device it keeps adding back using the Edge driver.

Is this a known issue or is there another process to revert back to DTH after trying an Edge driver? The Edge driver is missing functionality that I had with the DTH and I made the assumption that I could revert back after trying it. Apologies if this is incorrectly catagorized.

I don’t know anything about iBlinds but I can see three fingerprints for them in the production Z-Wave Window Treatment driver which seems a likely reason why you get the Edge driver.

ST seem pretty keen on parity with the DTHs. What have they missed?

Is your iblinds the version 2 or 3? The version 2 is notoriously problematic for using non-standard communication of state and battery data. There are community DTH’s that did a good job of dealing with those problems. I doubt the standard Edge driver was programmed to handle the special logic needed for this one (now outdated) device.

Actually my iBlinds are v3.1 which I believe adds a few more parameters to the v3.
I tried the beta channel “Zwave Window Treatment” driver solely for local execution of routines and didn’t take into consideration that all params might not be available with that driver. Unfortunately one of those params was of particular importance and remapped “open” state tilt level.

I figured I could just delete the driver and revert back to the DTH, but now whatever I do with reinclusion of the blinds they always come back with the Edge driver. My hub is a 2nd gen with .043 firmware and checking the blinds on the IDE obviously shows no network ID thus not allowing for change of device type back to DTH either.

As mentioned, I was curious if this might be a known issue or if others might be stuck in a similar predicament. Fairly frustrating not to be able to revert back to what I had before, and at this point, beta testing of Edge drivers seems to be just that: “beta” and a bit half-baked… or could be just me I guess.

IDE obviously shows no network ID thus not allowing for change of device type back to DTH either.

Just one question… you are deleting the device from the app first?

Yes, on my intial attempt to revert back I performed these steps in this order:

The blinds added back but with the Edge driver.
After two more attempts of deleting the driver in the SmartThings app and rebooting hub and re-adding device, I read the usage details on CLI, logged in, and followed instructions on driver removal from there. CLI confirms “no drivers found”
Re-added the blinds following the Inclusion/Add Device sequence in the SmartThings app and device adds back with Edge drivers. At this point I posted to the Community for assistance.

So which DTH were you using? The stock iBlinds DTH has been migrated to Edge for new additions but nothing 3.1 specific leapt out at me in that.

In response to RBoy:
Yes, that was my expectation but it’s not picking it up. IDE shows the DTH listed and published. As far as fingerprinting I’m assuming what’s coded in the DTH, correctly corresponds to my device. 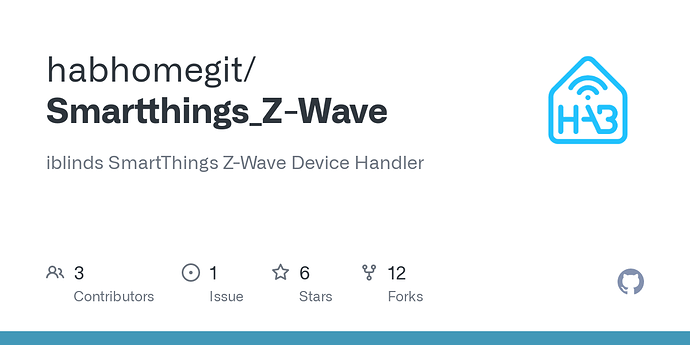 Two thoughts,
I have 4 other iBlinds devices which are v3 which are using a previous DTH. With the v3.1 device I was directed to the above mentioned DTH by iBlinds because it supported a new parameter allowing for correct remapping of open state and instructed to add it as a custom DTH. With my 4 previous blinds no additional DTH was necessary and I used what was already existing in the SmartThings device repo.

Regardless of any of this, if the Edge driver is deleted from the hub shouldn’t it be “gone”? Why would the device keep adding back with a driver that’s apparently been deleted? Is there a local or cloud “cache” somewhere where it still needs to be cleared from?
Weird, and again, fairly frustrating.

I think SmartThings have done the best they can in migrating the DTH to Edge based on the latest version committed. Presumably there are reasons the later version has apparently not been committed.

Just to be clear, the stock DTH is basically past tense. Any devices currently using it will keep doing so but if you try and pair them again they will pick up the Edge driver.

That was the trick orangebucket, thank you!
I tweaked the name and the device added back with the DTH. I also changed the name back, updated, and everything still appears to be functioning as before.

As an end user this was quite frustrating. Along with a lack of “backend” understanding, I probably didn’t inform myself enough with the whole Edge driver process or the current state of migration, but I was under the assumption that a device could be reverted back to DTH for now regardless of migration status. That doesn’t appear to be the case and is good to know going forward.

Oh well… On a side note, hopefully vendors can timely align with SmartThings during the transition but that’s probably asking too much.
Thanks for your assistance!

As an end user this was quite frustrating. Along with a lack of “backend” understanding, I probably didn’t inform myself enough with the whole Edge driver process or the current state of migration, but I was under the assumption that a device could be reverted back to DTH for now regardless of migration status.

I think you got a bit unlucky.

I am tagging @nayelyz from Developer Support here in case there is something to be learned here or she sees something the rest of us missed. It may also be that one of the reasons you got unlucky is that she didn’t see the thread first.

Nayely, the situation here is that a manufacturer has an ‘official’ DTH in the ST repo, but also has an update to that DTH in circulation as a custom DTH. The stock DTH has been converted to Edge as part of the Z-Wave Window Treatment and the devices are fingerprinted in the default/production channel.

The end result seems to be that adding devices results in the Edge driver being installed and used despite there being the custom DTH in place.

Tweaking the name of the custom DTH seems to allow it to be picked up.

Yes, the device being paired with the production driver by default is expected (announcement for others reference).
I’m not sure why having a custom DTH with the same as the stock one would prevent its recognition but remember that in Groovy many things depended on the DTHs name (presentation, deviceType, etc.) so, a good practice is having different names for each version to avoid this kind of issue.

I will check with the team if there’s a special restriction about DTHs names but you’re right on track with this workaround.

I tried the beta channel “Zwave Window Treatment” driver solely for local execution of routines and didn’t take into consideration that all params might not be available with that driver.

Hi nayelyz,
I’m not sure I 100% understand your question but yes, I believe that driver is missing the following param described on iBlinds support site:

In my attempt to revert back to DTH, I also reset the device and the blinds would not recognize “open” state as 50% and the Remap setting was no longer there with the Edge driver. So basically the blinds would tilt all the way up as “open” state. I’m not sure what changed with their devices but I have four other iBlinds (v3) which did not require this Remap. Only my latest blind (v3.1) required this and it happened to be the one I tried the Edge driver on.

I’ll admit I had not read the announcement you linked which now gives me more insight on the driver migration process. Probably typical of an end user, but I’m of a set-it-and-forget-it mindset and this particular situation was quite the “pickle”
Appreciate the info and assistance.

Nayely, I do understand the question so I’ll clarify.

The stock DTH recognises the version 3 and 3.1 devices and handles five Z-Wave parameters (numbers 1 to 6 - I know that is six but one of the numbers isn’t used). As far as I can see all those are available in the driver. @theparkdude would have to say if they work properly but I’d like to think that as the devices have been added to the production channel they are believed by ST to be OK.

According to the iBlinds support site, later versions of the firmware for both the 3.0 and 3.1 devices have four more parameters, numbers 7 to 10. Those are not in the DTH in the ST repo, they are in an update from last November in the third party repo mentioned earlier in the thread (along with an additional parameter 11) and are the reason the custom DTH is still needed by @theparkdude for one of the devices.

ah ok, got it.
The migration is based on the original DTH as the devices included there were certified by the manufacturer. So, iBlinds should contact ST in case they want to add those parameters to the existing driver.
So, @theparkdude, I suggest you contact their support team so they’re aware (in case they aren’t yet) of the requirement of the update of the official driver.

Will do nayelyz, yes they may not be aware.

Now that I have a hind-sight view I realize exactly what happened. Good to know going forward as my home is well immersed in SmartThings with many other devices.

Thanks again to orangebucket for his excellent sleuthing, appreciate the effort!

First my apologies for my ignorance as a new ST convert from Wink. I want to use a custom device handler from RBoy for my GoControl (GC) Garage Opener (GD00Z-4). I have the handler published in the IDE and have been successful with their DH’s for my Honeywell thermostat and Schlage Connect lock but the GoControl always gets added to my hub (Aeotec) under the Edge driver and not the custom DH. Since it is under the Edge platform I am unable to reassign the Type as there is no Device Network ID listed in IDE. Any guidance or help you could provide in getting the GC to add under DTH so I can use the RBoy DH would be greatly appreciated.

under the Edge driver

Welcome to the SmartThings Community, @JRDurante!
To which Edge Driver is the device being paired?