Tripod is taller than I expected. Looks good, though: 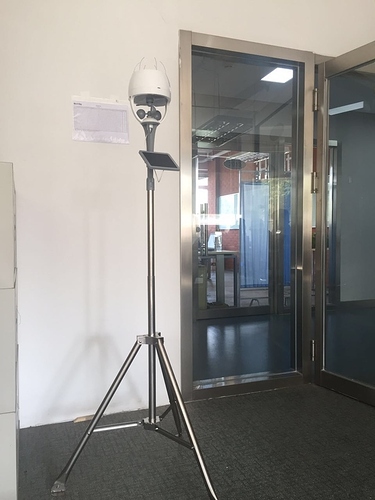 and they won’t reply to my emails

I’d suggest calling them. Way back when I had setup problems on the Sky, I called them and pointed out they had several unanswered support requests and the person’s response was along the lines of “I’d forgotten about that”, after which someone answered them all.

Just curious, has anybody got their Storm yet?

Not yet. I am waiting anxiously for it.

Nope. Sent an email and the response was ‘check the kickstarter page’

Last update was that if you were getting a mount it would be " early November". Not quite what they consider " early" .
As long as it gets here before snow flies I am not too worried. I’m not allowed on the roof more than necessary. Definitely not once there is snow and ice on it. Planning to put the Storm up while stringing the Christmas lights. They go up the last nice day before Thanksgiving .

I’m not allowed on the roof

Neither am I. A long story, at least the boss doesn’t make me put up a lot of Christmas lights anymore!

My holiday displays are one area the boss has given up trying to limit me. I’m using a lot of Hues, LED strips & GardenSpots. So once I put them up, they are there forever. When I painted the house last year I put 1 inch tea cup hooks every foot along the entire fascia, so the stringing of the actual Christmas lights pretty easy, but I still need to get out the 36 foot ladder to reach the peak.

If you want to buy all my Light-O-Rama controllers…I’m sick of putting up 10k lights and taking them back down every year.

Putting up the Storm, if we ever get it, minor inconvenience at best!

…I’m sick of putting up 10k lights and taking them back down every year.

Hence why I have been upgrading to permanent lighting. The icicles along the roof, Strings of LEDs along fence, and the bushes in the front of the house are pretty much only lights that need to be taken down. Even the arborvitaes along the street are covered with strings of permanent commercial landscape LEDs. Then of course all the yard figurines and junk . At least Christmas decs stay up for a month. I spent all day Tuesday taking down all the Halloween junk I spent all day Monday putting up.

I kept thinking about running Light-O-Rama , but could not imagine the time and equipment investment involved to do something I would be proud of. I have a few sound activated light controllers and outdoor speakers. It may only have 4 channels, but still pretty good.

Large swaths of my life have been “wasted” on it, though it was worth it, very cool stuff, just…so…much…time!

Putting up the Storm

I bought the Storm not so much for the wind speed/direction, but for the rain gauge. Yea, I could put it on my chimney stack for a more accurate wind reading. Just gonna attach it to my fence; about 100 feet from trees & houses.

A new question? Wasn’t there a possible dedicated BloomSky “tablet device” in the works, not sure what to call it, that would show all the pertinent weather data for my BloomSky? Would love to have that next to my desk, so I don’t have to look it up on a device.

Plus: Alexa, “how much rain did I get last night?”

Plus: Alexa, “how much rain did I get last night?”

Call up BS and ask them to get Alexa app going.

As far as a dedicated display, I am fairly certain you could do that now with SmartTiles and the Bloomsky app in ST. BS app itself is useless since it does NOT refresh and does not work in Landscape .
ST gets every update , so I would think you could put those into SmartTiles tiles . .

Tim,
Just received my shipping notification. I should have my Bloomsky Storm by Friday afternoon. Let me know what you need to guinea pig my station to hopefully implement the Storm data into ST.

@edden Send me a PM when you get your Storm

Mine shipped today, due here next week.

More than glad to help also with any data you need.

I got Email with tracking number, UPS has it scheduled for delivery on 22nd. However they have not actually received it yet. Just notification that label was printed. So I am not counting on anything until it actually ships .

mine is also showing delivery on 12/22 and is in transit. Santa’s arriving early.

I ordered my Storm with the tripod. Does anybody know if that ships with the actual Storm device? Wanna think one of my emails said to expect that later. I’m too old to remember & too lazy to look it up. My Storm should be here 12/21!

I wish it could measure snow depth.

I don’t remember either! Haven’t gotten a ship notice so extra too lazy to look it up.