Just the storm and the spike, the mounts are not in yet so they are shipping the Storms without them to get them to customers.

Just the storm and the spike, the mounts are not in yet

Yes, because we all need to know what the wind speed is 2’ off the ground. Not that I am going to be allowed to get up on the ( icy ) roof to mount it properly for a few months anyways. Might be interesting to stick it in the wind tunnel between house & barn just for laughs.

Yea mine is going on the deck on an existing Sky mount until the tower mount arrives and weather permits.

I’m only allowed to get on the 2nd rung of a ladder; maybe the 3rd if I’ve had no beers that day. I know it’s not perfect, but plan on attaching my Storm to this old weather station bracket on my fence. My main interest is the rainfall. Hoping just to use the main shaft of the tripod to attach it
. 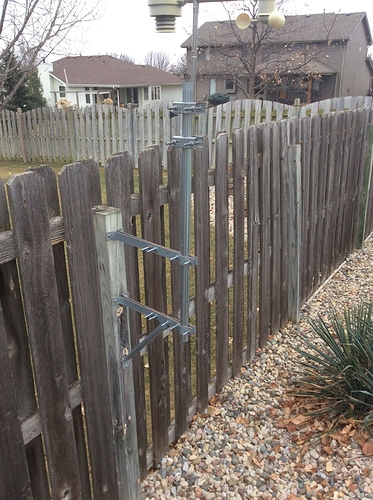 I’m only allowed to use the 6’ step ladder ( Maybe the 15 in an emergency ) . My Christmas lights go up ( not on ) in mid November. The 25 & 35 foot extension ladders get put away as soon as temp drops below freezing. To get to the peek of house ( where I want to mount storm ) I need the 25’ ladder on the roof of the porch. That roof now has a nice 2-3 inch layer of frozen snow & ice.

Mine is out for delivery today. I don’t see my afternoon being a productive one.

It’s been so long I don’t know if I ordered a mast or tripod.

I was correct, not a productive afternoon. I received both Sky and Storm, but I haven’t received my mounts. Aiming that stupid camera was a pain in the ass.

Aiming that stupid camera was a pain

I think we all suggested that they add a force refresh or direct connection for setup purposes . Of course they didn’t listen.

For me it was more that I put it up about 15 minutes before it got dark and quit refreshing and it’s in the mid-30s.

mid 30’s that’s balmy. Never even hit 20* here today. A direct connection to camera would have made aiming easier.

Yeah! Shipping notice … will be here the 19th

We can send out about 50 units a day domestically, so we’re rushing to get you your orders as soon as possible.

Only 50 a day !!! Are they actually doing QC and have 1 person setting each and every unit up and making sure it works before shipping ? I can set one up in 10 minutes, which would be 50 in an 8 hour work day.
UPS received my Storm at 2:30 this AM, delivery updated to 12/23 ( weather permitting LOL )

Are they actually doing QC

I don’t think so.

At 50 a day it isn’t that bad. I backed BloomSky in August (Backer #3091) and I received my Sky2 and Storm yesterday. No mount yet though.

I backed BloomSky in August (Backer #3091) and I received my Sky2 and Storm yesterday.

So they are obviously not fulfilling orders in order. Not sure what my " backer number is, but I took part of the prerelease for current BS owners in mid July, before the campaign actually went live on KS.

I was backer 518 and just received my shipping notification…

I’m 318 and still haven’t gotten mine. I did get the Sky2, but nothing at all on the storm.

Just curious where you all are coming up with your backer numbers? I went back through the emails and don’t see any reference to a backer number