Where do photos go?

I’ve connected dropcam, setup a motion event. My system tells me motion detected and photos taken. I even get a text message as requested … but no idea where these photos actually went?

I saw a similar thread and they said ‘swipe through them’ that’s great I cant find a single picture. I go to activity feed and it says photos were taken, but where can I actually see them?

Are you using the Android app?

iPhone … on an ipad … which also annoys me a great deal that there is no ipad app.

FYI, I tried my wifes Android and also see no pictures. The camera works, I can go into ‘things’ click the dropcan and click take photo and I see it. If I go to activity view it says motion detected and pictures taken but if from the dashboard I go to ‘motion’ it says ‘no motion has been detected’.

Yep… Its broken… Both my iPad and Android app are broken for dropcam. Support acknowledges the issue but told me its not a priority. So who knows when we’ll see a fix.

Boo ! I went into the dropcam device on the web interface and see this

So even the camera thinks it took a photo … bleh !

Mine seems to work. It did take about two minutes which is longer than normal.

Are you still having the problem?

Yep. Been broke for a month or so now.

Yep … the camera says it took photos but they don’t show up anywhere in the activity feed?

just tried mine.
Both ios and android are working as expected
The android app still has the issue we discussed in the other thread where I have to find the photo in the activity log and select it before it shows in the dropcam settings.
I took a photo with both ios and android and both showed up fine for me.

@tslagle13 Did support say it is an issue with specific phones or operating system versions? I have Moto-x and my wife has a Samsung Galaxy 5 that work.

You don’t have to do any rain dances to get it to work? I have a nexus 5 and it doens’t work on there. never had. not even with a rain dance.

Am I doing something wrong? I have both an iPad and a galaxy s5. Where should I be seeing the pictures at ?

on either device I go to things view. Dropcam icon - click the gear upper right and then they are displayed top and swipe left for the last 10.

If you want an older one you have to go to activity in the same gear view and pick the one you want to see - they are timestamped but no preview.

iOS auto loads last 10. Android I have to always select from the activity log

sounds like some rain dance stuff to me. i shouldn’t have to go into the activity log in the android app in order to see the pictures that works perfectly fine on iOS… plus on my nexus 5 it doesn’t work at all can’t even view them by going into the activity feed.

like i said, support knows about, and acknowledges the issue, but has told me repeatadly it “not a priority”.

Not sure what is a priority but rolling out a broken feature puts a bad taste in my mouth.

It definitely isn’t intuitive even when it works or else we wouldn’t see all these photo questions. I’m hoping the next iteration ST comes out with address this as well as support camera’s better than Dropcam.

Are you looking for an alternative to the dropcam subscription? Have you looked at IP Cam Viewer? It supports dropcam and has local archive capabilities (if you have good bandwidth).

Awarded Best Software in Utilities category for 2011 Remotely access your video camera, digital video recorder, network recorder and webcam. Over 1600+ devices supported. Use Scan Camera to automatically find compatible driver. http://hit-mob.com/android_device_support_list.html With 5+ years of development there are so many features they won't let me describe them properly so here's an overview. Wide protocol and video format support include HTTPS, RTSP and ONVIF. Features include matrix vi...

Thanks. I don’t mind the subscription in fact I will probably still pay for it.

I think my problem here is that I may be holding Smartthings to a standard that they can’t meet for Android users. Maybe I have to accept that if you use Android you have to expect things not to work as advertised and to be a few revisions of the mobile app behind.

In the beginning Smartthings was always on top of things and lately it just seems that they subscribe to the belief a lot of companies do which is if it works in iOS its working and we’ll get to android at some time or another but whenever that happens it happens.

Just discouraged about android use in the Smartthings platform.

I guess old habits are hard to break. They had a story on TV indicating over 80% of new sale smart phone run Android. I’m sure there is more to it than that however. Maybe iPhone has higher percentage of early adopters. Initial release may be easier with a limited and more controlled Apple platform than the plethora of Android devices.

SmartThings indicated the Android 1.6.1 release will be early June. I guess we will see if they have matured as a company when this “date” comes along.

Yeah last time a study was done apple users were more likely to “spend money” but that isn’t true any longer. In fact android devs now make more money per dollar and the last study i saw was seeing android as a much better platform in terms of LifeTime Value of an app. This surprises many companies but the company i work for develops app first on android and then on iOS. Our early adoption has gone up 63% and the LTV of our android apps is about 2-3 years longer than iOS apps. Basically we make money on our apps wayyyy longer than we do on iOS. Here’s a quote from a article i read recently about this subject.

The facts are pretty staggering. While all of us iOS app marketers have our heads buried in the latest App Store algorithm changes and churn and burn models, the rest of the world was buying Android phones (see article here). Android is crushing the overall market in volume – everyone and their sister seems to be adopting to Android via the savvy marketing of companies like Samsung and Google (Nexus).

Like most iOS games, the launch spikes, dies, then goes away. Android has a much longer and flatter curve. This is based on the charts and their power on iOS. Of course, this is only 2 weeks so I don’t think I am in any position to make full conclusions here, but from talking to others it seems that having great publishing (especially great copywriting) on Android can have a much more positive long term effect than trying to select perfect keywords on iOS.

This is contrary to every single study and report I have read including those from this year :

Apple may have the minority mobile share, but it monetizes iOS via mobile app sales far more effectively than Google Play 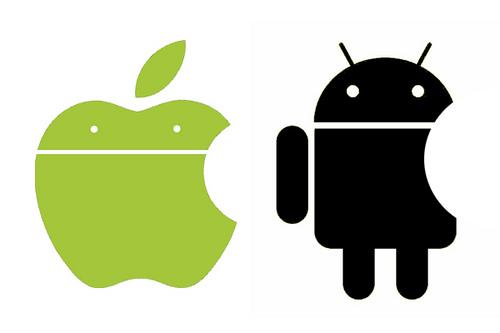 Android Dominates Market Share, But Apple Makes All The Money

We’ve been hearing for years now about how Android is destroying iOS in market share. Ironically, though, Apple continues to make more money than all of the Android smartphone makers combined. The most recent data from IDC shows that for Q3 of 2013...

Every study agrees that Android has an 80% market share, but has an inverse relationship on app $$. Despite dominating the market in number of units out there, Android app store accounts for less then half that of Apple. This is why people still make apps for Apple. The last article has a key statistic, Apple has 45 million customer credit cards on file, Google has 22 million. People, on average, with Android don’t buy apps, people with iPhone/iPad do.