What Thermostats Besides the Nest Do You All Use?

I have the PEQ as well. Looks nice and best buy had it on sale for $80.

Thing I don’t get about nest + home automation is, if your home already knows when you are away, your schedule, the temperature across the house… What’s the point of nest? It’s great as a stand alone unit but I don’t see a place for it in a smart home. It’s redundant.

This topic has been covered several times in other threads.

Amongst others, you may want to keep your cooling/heating/fan scheduling outside of your HA platform for this reason:

Scheduler and Polling quits after some minutes, hours, or days Writing SmartApps

I have a SmartApp that brightens lights in a zone when there is motion or a door opens. It dims the lights after a given timeout period. I have 6 instances of the app on one hub, (6 different lighting zones), and 8 on another hub, in another building. When the app initializes, it starts the scheduler to run a scheduleCheck() function every minute, to turn off lights, when appropriate. It was working for months. Then it stopped dimming reliably. I have determined that the scheduleCheck() function stops running as scheduled. I have also noticed that it now usually schedules at the top of the minute, i.e., the seconds are zero. This did not used to be the case. And the time between scheduled calls can be 1, 2, or 3 minutes. I have just installed a workaround, in which I re-initializ…

See my last post about it here for more details:

Which Thermostat has the best SmartThings Integration? Devices & Integrations

Pretty sure ST is also now supporting the ZEN thermostat. I had two ecobees in my house, they were too much for my needs when looking to control via ST. In the end many of the great features they have made it difficult to control exclusively via ST, they were too capable. I’ve since switched to a PEQ (centralite) in the garage and a ZEN in the house, these are completely controlled via ST and automatic mode changes. I do not have a need or desire for the thermostats to have or manage their own schedules, and ecobees web analytics and data collection pages while very good weren’t a requirement on my end.

I use the Honeywell z-wave model but no overly impressed with the SmartThings app integration. Very basic functions and with my fat fingers, very cumbersome to adjust the temp.

@mechols, are you using ST’s default device type? If so, there are a couple custom ones that are a whole lot better in my option. Here’s what my device type looks like: 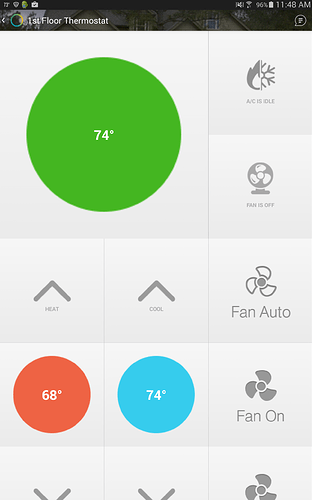 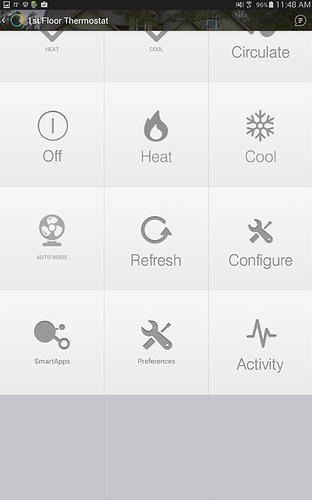 You’ll note that Auto mode (heat/cool mode change) isn’t a option I added, and that’s because I never use it.

Ecobee3 is awesome! Really like the remote sensors placed in the rooms we use most often.

I have the Zwave honeywell and it has been working great for me. I bought mine at home depot .com

I have the Ecobee Smart (not the Smart Si… the slightly larger one that I guess they don’t sell anymore). Bought it shortly before the Ecobee 3 was announced… probably would have gotten a 3 if I had known they were coming out. Still, I like it. I don’t do much (yet) with it and SmartThings but they do talk to each other for the most part.

I received my Zen Thermostat about a month ago, but since we only use it for heating I haven’t had the opportunity to see it in operation. I’ve been taking advantage of the off season to refine the programming based on presence and time. Our local utility companies offer a $100 rebate on wifi-enabled thermostats, making the price much more reasonable.

So if it can’t be added as a temp sensor how are you using it?

That Venstar is quickly moving to the top of my list. Really liking the look of it.

I think it’s coming down to the Venstar or the Zen. Not sure if one would be better than the other. I want to make sure both fully integrate with ST and I like that both look good on the wall.

The Zen can use its temperature sensor for its own purposes, so it can control HVAC. It doesn’t allow you to utilize the temperature data to control other actions. For example, you can add a SmartSense Temp/Humidity Sensor or Aeon Labs Multi-Sensor that allow you to create actions based on temperature. Even with the thermostat tracking and logging temperature data, it can’t be used like those other sensors.

Honeywell 9580 WiFi works without a hitch. Using user provided code from our forum.

Read all here and the latest code is linked.

Love my ecobee si. They work great with ST

I use the trane. http://www.zwaveproducts.com/Zwave-Climate-Control/Zwave-Thermostats/Trane-TZ400BB3VZNNSL-Z-Wave-Thermostat.html

It works well enough although I just use the program on it mostly except once in a while I do a manual temp change from the app.