New here and although I’ve found a few threads that cover segments of what I want to do, I’m a total newb to home automation (other than having Hive heating!) so really need some clarity on what exactly I need and how to do it

We’re currently having built a new single extension with vaulted roof that I want to uplight with dimmable LED strips, ideally smart control with RGBW if it’s not a lot more complicated. I initially looked at the Hue strip kits but the wife wants regular wall switch control rather than the Philips plastic remote wall mounting so that’s out the window it seems.

So, I think what I should to be looking at is some LED strip, a suitable transformer and a Fibaro RGBW controller with a Smartthings hub but I’m not certain what else I’d need as a minimum or what to tell my sparky in terms of putting wiring in that will support it so have a lot of questions in my head that I haven’t found the answers to

Just to add, I’m yet to find a Fibaro RGBW handler setup to change the device parameters, so changing to momentary switches is not straightforward for a novice user.

Any reason you’re not using my Fibaro RBGW handler? It allows all parameters to be changed and supports using channels as inputs.

EDIT: I realised I forgot to create a thread for it, so here’s a new one:

#Fibaro RGBW Controller (FGRGBWM-441) - Advanced DTH Version: 0.03 (2016-11-14) Source: https://github.com/codersaur/SmartThings/tree/master/devices/fibaro-rgbw-controller Woops! It appears I forgot to create a thread for this, so here it is: An advanced device handler for the Fibaro RGBW Controller, with support for changing all parameters and use of channels as inputs. Key features in v0.03: Z-Wave parameters can be configured using the SmartThings GUI. Device associations can be configured using the SmartThings GUI. Support for using the channels in a mixture of IN/OUT modes (i.e. support for analog input sensors)! No more glitches (as sending commands and receiving reports is done properly!)

Thanks Robin, that clears things up nicely, so a default set RGBW with toggle switch would just power them on or off with no dimming I assume.

When you say you don’t use physical switches, I’m guessing you’re using LED strips for extra mood lighting rather than a primary light source are you? I’m wondering if that might be a better way for me to do it, put “dumb” dimmable white LED strips in now and then perhaps introduce a separate smart controlled RGBW strip for mood lighting that could then just be app driven.

Sorry to dig up and old thread but. I am trying to see if it is possible to use an in wall RGBW controller RGB controller with the Fibaro RGBW.

My wife likes hard switches vs my love of voice control.

I’m trying to establish my best, cheapest, smartthings compatible option for running a rgbw lightstrip around the ceiling perimeter of a small room.

I did have Philips hue strips connected directly to my smartthings hub but after working flawlessly for 4 months they suddenly dropped off the network never to return again.

So now I’m looking for something that will do what they did when they worked and be controllable through stmartthings.

I’ve read about the Fibaro RGBW controller but in my ignorance I have no idea how you would connect a dumb lightstrip to it (if indeed that’s what I should do).

Thanks so much Robin.

Is this the right Fibaro device? http://amzn.eu/aVxWscZ

If I buy this, the adapters you suggest https://www.amazon.co.uk/dp/B00W0YU4K0/ref=cm_sw_r_cp_api_8aXCAbZNKJE85

and this light strip http://amzn.eu/8kyniNc (not sure if it’s any good as not sure what to look for)

Is that everything I need?

Thanks. so this one would be fine? https://www.amazon.co.uk/LEADSTAR-Waterproof-Changing-Flexible-Decoration/dp/B01D80WTD4/ref=sr_1_1?s=outdoors&ie=UTF8&qid=1519042810&sr=1-1&keywords=rgbw+light+strip+led

Is that everything I need?

You’ll need a 12v (non-dimmable) LED driver as well… sometimes works out cheaper to buy a strip that comes with a power pack, dispose of the dumb RGBW remote and module, and cut the DC Jack off the end of the supply wire for connection directly to the Fibaro.

Exactly what I have done.

so if i get these 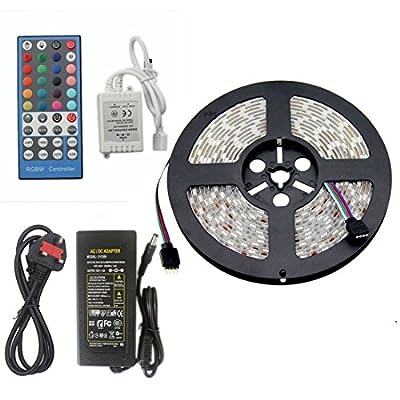 Ok. So what do I need to get to do that?

Not worried about looks but certainly safety!

these are the two copper wires inside the power supply cable. Neither have a stripe. Which one is which ?

What is this for ?

Also, you say to add th e black core of the extension to the 12 /24vdc slot, that will mean two wires are connected to that b it (as the power cable is already) is that right ?

At some point earlier in the thread you recommended I bought the white extensions in the other pic, thats fine can keep for other stuff.

Looking at this pic of the power cable, can i cut this little barrel off? and re strip the wire?

Wrap a cable tie right around each wire where they enter the box to act as a cord grip… if those wires get pulled they will come away from the Fibaro and short circuit something.

You might as well book a ticket. You are going to do the entire install for him anyway.