My offline issues seem to be different from what I am reading here. I only have maybe 25 devices and all are z-wave.

Minoston smart plug goes offline every day now since the update. I have a second plug that stays online so far. When I press the manual power switch, the app instantly registers the plug is back online. Repair zwave network does not fix the offline issue.

These devices can also go offline but zwave repair network often fixes it
Honywell dimmer plug
GE 120v outlet. I have three of these but only one goes offline. Not sure if they are identical.
Econet water valve.

Do you know if those devices are using a DTH or an Edge driver?
It can be identified when you enter in the device’s detail view because the option “Driver” appears in the menu. 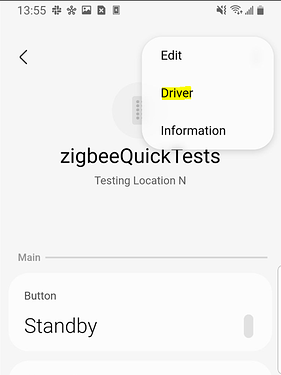 Having my Zwave Thermostat disconnecting after a couple of days. Before it used to be the most stable connection on the system.

and while both hub and thermostat are in the same room (2m max) , for no good reason they are connected via a Zwave socket in another room

DTH. Past few days only the one Minoston plug is going offline now. Maybe it’s just a coincidence and I just have a defective plug.

Same issue with edge driver for an Aeotec siren/doorbell 6…

My devices have been going offline every few hours, since they (Smartthings) released faulty firmware updates. It’s been unstable for almost 3 weeks now. No response or any type of update so far…

I’m in the same situation, the hub is constantly losing connection with the cloud.