I was about to post about possibly getting a Ring Video Doorbell 2. Anyone got one working with ST, and got any clever routines linked up (like flashing lights linked to the built in PIR) or is that optimistic?

And is there a way of using ST to sound some sort of audible noise as a result of the door bell going without tying up a plug socket (and paying more money) for a Ring chime?

Seems to be dead now.

Nice deal if I technically had a “front door” or LOL even a “back door”.

This is one of those things where it might be valuable on its own, and not really need a direct integration. I mean, the thing has its own app… can’t the alert to your phone happen via its own app and still be useful?

Not if you want it to do more than just pop up in an app. I don’t think (in an ST world) it’s unreasonable to want a door bell to flash your lights if it’s activated. And it’s not just a doorbell either - it’s got motion sensors, and being able to leverage those on a security basis (for example overnight) is a reasonable desire, surely?

I have a Ring Pro integrated with ST and use it to turn on my front porch light when it detects motion. I also have it integrated with Alexa and she will show live doorbell video on my FireTV or Echo Show devices if I say, “Alexa, show me the front porch.” My old Ring also worked with ST, so I imagine Ring 2 will. Ring 2 will also work with the Alexa skill.

Yup - I have my Ring set in ST to do the following when motion or rung:

We’ve had a couple late-night rings over the years, one was police checking when both our garage door and door into utility room from garage were open at 4AM (DOH! How could we forget both!) and once when a neighbor had an emergency.

So the integration is useful…the app can notify on your phone, but the other stuff requires integration.

Also, some folks reported that the ST device handler for Ring was showing a live stream in the ST app, but it was rolled back. But I think it’s safe to expect that feature will be live in the near future.

I think it’s safe to expect

Never safe to ass-U-me anything in this world.

Never safe to ass-U-me anything in this world.

It’s ok to have expectations. I won’t be planning a launch party and inviting the mayor or anything.

Any link available for where people are discussing this? I searched but didn’t turn up anything.

Any link available for where people are discussing this? I searched but didn’t turn up anything

It‘s too bad I didn‘t take a screenshot, because I know I am going to get a ton of comments like „live video is not supported in ST“ or „it is not possible since Ring have closed the access to live video“. But, I swear yesterday when I opened my ST App on iPhone and opened the Ring DTH all of the sudden I had a live video feed and the „Ready“ icon was at the bottom left instead of center stage. Now, today it is back to the way it was before without live video. Please, before people start saying I am a liar. This is totally true and I am suspecting that ST is testing live video in the DTH and potentially published it by acccident. At the time yesterday I just thought this was implemented silently and didn‘t expect it to be removed. So, I didn‘t think of taking a screenshot for proof. So,…

It pops android alerts, right? Different ones for a motion sensor activation vs a rung doorbell, right?

Via Tasker/AutoNotification and Sharptools, those alerts can be leveraged into action in SmartThings.

I’m sure you’re right, but it seems like an extra link in the chain that could really be avoided.

I’ve got the doorbell now and you can rig up SmartApp’s that use the doorbell as a motion sensor, but it doesn’t appear that it can be used as a switch. So I can set it to flash the internal lights when motion is detected but not when someone physically presses the doorbell. I’m keen to see that changed at some point.

It is understood by Smartthings as a button.

You can use it in a Smartlighting automation to turn on a light when the Ring doorbell button is pressed. 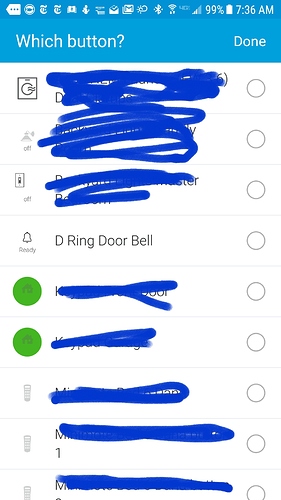 I’m using a SmartApp that flashes lights and that won’t accept buttons as a trigger, only switches - and it doesn’t show as a switch. A standard Smart Lighting automation won’t give me the option to flash the lights will it?

Side issue, other than paying £30 to Ring for a door chime is there a cheap Z-wave chime or similar I could use to be activated by the Ring doorbell?

SmartLighting doesn’t have a flash option. You need to use Flasher app or similar to actually flash lights.

Regarding your SmartApp - if it was built by a community member, try asking them if they can add button control.

The SmartLighting app doesn’t support flashing lights at this time. webCore can do that easily, you can use the doorbell as a button and flash lights, but it’s not as simple as using a SmartApp of course.

It was a community SA so I’ll see if they can add it.

In the meantime, any recommendations for something that’ll do the job of the Ring Chime? I’m okay with buying one, but if there is a more generic Z-Wave or Zigbee device that’ll do the same job that would certainly add more flexibility in the long run.

ETA:
The SmartApp I was using was The Flasher. I have a little play, and by copy/pasting the lines of code relating to Switches/Presence sensors etc and putting in ‘button,’ in the appropriate places, it (subject to testing) seems to have worked and I can now use the Ring Doorbell to activate the SmartApp. Quite pleased I was able to sort it myself touch wood