There are a few Ring Video Doorbell Pros at a lower cost ($216.97 plus shipping) on Amazon today: 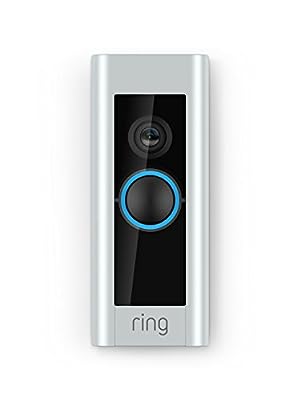 Because for some reason those didn’t show up as other sellers when I ordered yesterday.

Well, after over a week of the seller (not Amazon) repeatedly lying to me about when it was shipped (the USPS history shows that they didn’t receive the package until 6 days after the shipping label was printed…which eliminates your ability to cancel an order via Amazon…and 3 days after the seller claimed it had shipped and that USPS was just being slow about updating their online tracking info), my Ring Pro finally arrived last week. I spent yesterday morning installing it exactly per the instructions and, after restoring power via the circuit breaker…viola! Nothing! The unit did exactly nothing. No light, no voice greeting. Nada. It’s dead, Jim. Bereft of life. It has ceased to be. It’s rung down the curtain and joined the choir invisible. It’s not pinin’ for the fjords. It’s just dead.

Before ordering the unit I used a digital multimeter to ensure that the juice to the old doorbell was up to the Ring’s requirements, and checked again after installation and the failure of the unit to power up. The voltage is acually reading just a hair over 28v (which per Ring’s engineers is fine, and quite normal for 24v AC transformers).

Awesome. Now I get to deal with returns to a dishonest retailer.

Awesome. Now I get to deal with returns to a dishonest retailer.

A quick chat/call to Amazon should fix it.
My order still shows as "preparing for shipment " , Amer E 's Amazon storefront is empty, so I am pretty sure they are not shipping. I used Amazon GC, so not really out anything and worth it to get rid of a scammer.

Well, after over a week of the seller (not Amazon)

This is why I avoid buying anything from Amazon. The customer service makes up for even a few percent higher price!

This is why I avoid buying anything from Amazon

I’ve never really had a complaint about Amazon CS. Just last week I contacted them about 2 of my 3 Gardenspots. 1 was missing the hardware kit and the other had a bad transformer. They refunded my full purchase price ( via Amazon giftcard ) and I got to keep both sets of lights.

OOPS! I meant “This is why I avoid buying anything from anyone BUT Amazon.” Totally didn’t type what my mind was saying!

Posted on another Ring thread here yesterday. My $185 + $5 shipping Ring Pro deal from Amazon was a definite scam. Supposedly delivered to the front porch of a home 1000 miles away from me. Amazon must of known about the “company” already, because it only took 1 hour to approve my claim.

Always a good idea to read the reviews of any vendor on Amazon. I choose to never buy from a new vendor who has no reviews.

OOPS! I meant “This is why I avoid buying anything from anyone BUT Amazon.” Totally didn’t type what my mind was saying!

Thanks for clearing that up. I read your original post 3 or 4 times before giving up and concluding I was having a synaptic misfire of some sort.

I did buy through Amazon so I’m sure I won’t have any problems. I was just venting, really. The seller had quite a few reviews, with no significant % of them being negative. Maybe I just caught them in a rare ethical lapse.