I just pushed out v2.5.2 to fix the phantom push notification

I tried re-publishing the app after changing the code to “submitOnChange: false” but I am running into a problem of not getting past the location selection. Now it also does not allow me to login to nest bringing up a blank page. Might be the platform stability issues they just experienced, I would wait until status.smartthings.com gives the all clear and then try again.

Ok, it let me get past the works with nest screen now but back to the location selection issue: That’s the same issue I’m having.

Guys I’m sorry about the issues you are seeing on Android. I’m going to follow up with @slagle on this issue.
In the meantime if you happen to have an ipod or ipad you can atleast get it setup and then you can manage the app from your android after that.

You will also notice that after creating an automation it will return you to the main smartapps page instead of taking you back to nest manager. This is another bug in the latest android client that is not present in iOS.

Hey there @tonesto7. I attempted to update my code to your latest version from Repo in the IDE. After I completed the code update, I am getting a null error across all fields in my thermostat “thing”. O Auth is true and I double checked all the settings. I have even tried to delete nest manger completely and do a clean install…Got the same results. I am on iOS if that helps; let me know if I am doing something wrong. Thanks, 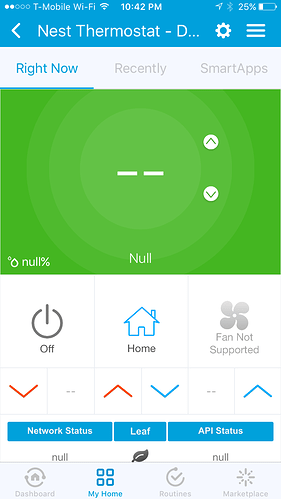 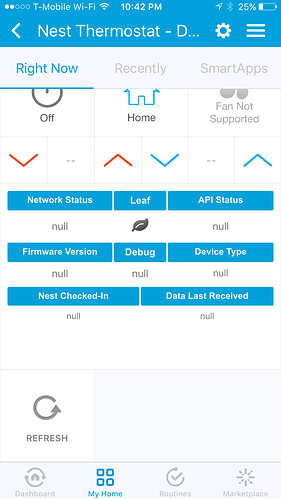 Did you update the device handlers as well?

no problem… Glad you got it working…

Question about an automation.

I have an automation to turn off the AC when a contact is left open for 1 minute. I set the ‘Restore to Previous Mode on Close’ to 1 minute as well.

The automation works fine when I leave the door open as the AC turns off, however the AC does not seem to restore to previous mode on close. Am I doing something incorrect in the automation? 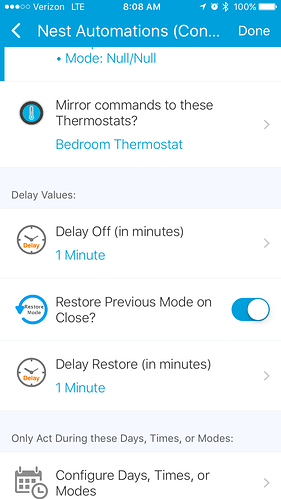 PS - As a workaround, I thought I would use @ady624 CoRE to create the turn on AC, but CoRE always returns false when I set the If statement to ‘If Thermostat Mode = Off’

BTW— great job this is the coolest Nest Integration I have ever seen by far.

The first thing i’m noticing is that does not look like the newest release of automations… Did you delete the old automations app from the IDE?

The new automations app is embedded in Nest Manager

Try with thermostatOperatingMode? If you enable expert mode in CoRE, you can choose what attribute to look at.

Hi, first of all, great app. Installed it last night and works great with my thermostat and three protects. The only issue I’m having is the weather app. I’ve configured it but it still shows a blank screen!!!

I can’t say for sure without seeing some logs, but I think I know what the problem is. I have made some modifications to the HTML Css location to pull from a CDN. I think that we are making to many requests to the github for the CSS file. Once the new data is pulled in you should be good… You can try and speed up the download process by opening up Nest Manager and pressing done.

Look into rawgit.com they can take the load, but they permanently cache the stuff. Luckily, you can use a tag for the latest version.

Is it ok now to upgrade the app if I have an Android? Are there instructions somewhere on how to upgrade? I read through the README Link and couldn’t find anything, Just want to make sure that I follow the right steps.

No, I was unaware that I had to delete the old automatons app. I will look into doing that.

I updated the weather device handler from github and waited at least 15 mins for the next refresh but still getting a blank page.

The only thing that appears in the log is an API Status is OK from last night when I first added this app. No other logs have been posted since.