You can use android on upgrades. As long as you delete any existing automations and remove the old automation app from the IDE. You can directly update the code without having to reinstall the app and devices. Once you update the code remember to publish and then open up the manager app and run through the quick setup and press done.

To answer your question on upgrading. Just use the same method you used to install the code initially

Figured it out. Was missing ‘pws:’ before the station ID.

ok I am just trying to install this for the first time on an iPhone and I’m having the same trouble Mugzzzy had… I get the screen telling me what is being requested, I hit continue, I log in and I just get a blank screen. If I press done, I get No Locations Found under Nest Locations…

Got it. Thanks for you help.

can you check the logs in the ide when you try to use the app?

hmm, I searched here for “SmartThings Location is not returning” and found another thread for v 2.0… I’d already gone through the IDE as the log suggested but didn’t see anywhere to set my location. Something in the other conversation made me think to look in the app and I found that I had not dropped a pin on the map to show my location yet (I use the fob for presence detection so I didn’t think I needed to set that)… Once I did that, it seems to be working now…

That’s interesting. That should have been resolved in this release… I will try to track that bug down

How do we disable weather push alerts? I have weather apps for that

@tonesto7 & @desertblade what is the purpose of Nest Presence device? Isn’t it the same as the one built-into ST iOS app? Or are there benefits to using your presence device?

Some people like to be able to detect Nest presence and run rules/routines off of it.

I personally don’t bother with Nest Presence, the location of my thermostat doesn’t get a lot of foot traffic so it’s pretty much pointless.

Isn’t that the point of the Nest Presence device then? I don’t have any Nest Protects and my Nest Thermostat is in a place where it doesn’t get any foot traffic so I cannot use auto-away.

@tonesto7 finally got it installed using my GF’s iPad, after a while the Nest Weather and Nest Presence devices appeared under the ‘Not Configured’ list under devices in the Market Place however, the actual Nest Thermostat device never appeared and I couldn’t find it in any rooms, I had to look at the entire ‘Things’ list to find it.

Ultimately I changed the room it was in on the IDE and it’s now fine. Did I screw something up? By the way, these SA/DTH’s are freaking awesome.

In follow up to yesterday. I updated to v 2.5.2 (as suggested), I then re-tested the automation with the same results: the A/C units both go off when the door is left open for 1 minute, but the state does not restore when the door is then closed. Screenshots: 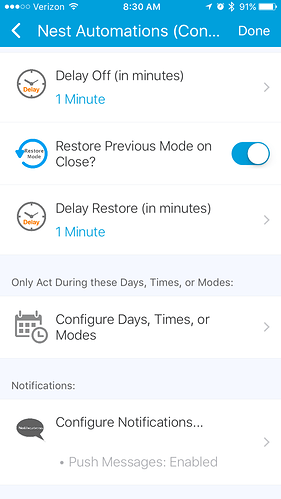 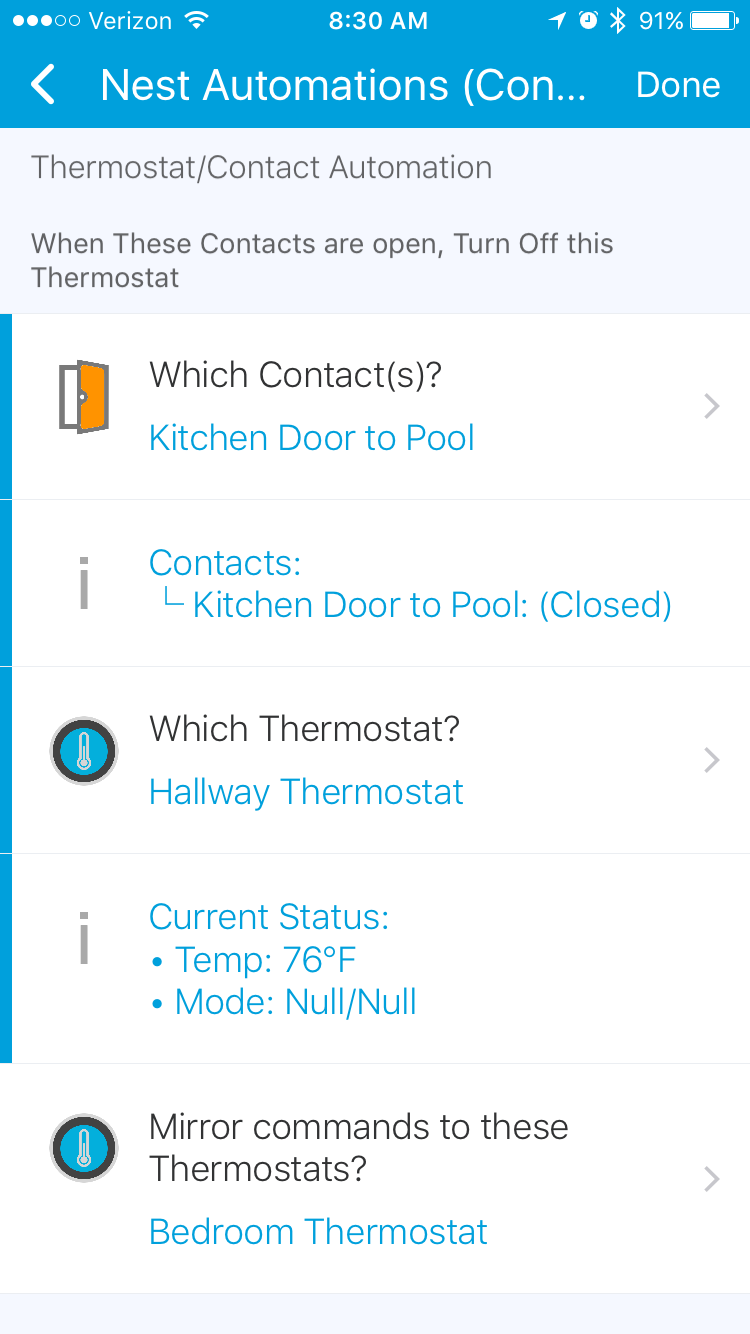 @JDogg016 Did you delete the old Nest Automation app from the IDE? The automations app is now integrated into the manager app code.

This is what the new app should look like. It’s not much different but should contain the Restore to Auto Mode. 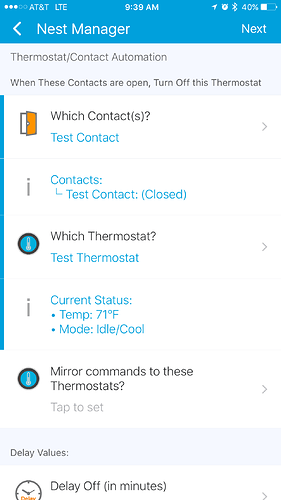 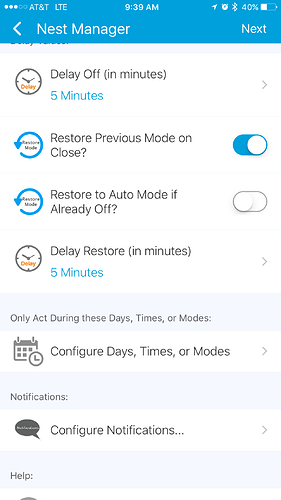 Were you able to get this sorted out?

Yes, thank you, once I set my location within the app I was able to get the configuration to complete successfully