A new version of the DTH for Osram GardenSpot Mini rgb lights (based on @Sticks18’s version).

This DTH is for directly connecting the US (Z HA) versions to SmartThings.

Without the Osram Gateway, the color loop functionality does not work for the US version of the GardenSpots (at least until they update the firmware).

But using the “hueLoop” and “hueRandom” attributes of this DTH, one create a CoRE Piston to cause color loop (even random colors) Device Tile contains sliders for individual control of hue, saturation, and transition time. Device Tile also contains buttons for (1) “hueLoop” (boolean “on” / “off” values) and (2) “Random Hue” (causes hue to change to a random color). Use these in CoRE to create color loop.

You can find the code here.

And, if you feel like making a donation for these community efforts, it would be greatly appreciated: PayPal.Me . Thanks!

Since I am still waiting for my GardenSpots to ship, could pictures be posted of the device screen in SmartThings and the Piston setup in CoRE for looping and Random.

I am really interested in the transition time and the Random Colors of this device type.

Also would getting this working with the RGBW A19 Light be as easy as just changing the finger print of the device or will the White LED not work with this handler?

These are RGB there is not a white led.

Sorry, I meant the A19 RGBW Light.

I don’t think the current Default SmartThings device handler has the transition time baked in, I noted that when it changes color it is doing one, but it is doing really quickly and it looks odd.

I am interested in this too. I installed CoRe and this device type.

I have one garden spot.

How is using this device type different then the built in device type and using the Garden Hue smart app?

Garden Hue only allows you to turn the lights off and on at Sunrise and Sunset with an Offset (I believe), while being able to have it run from CoRE will allow you say I want the light off at 11pm every day regardless of sunrise time.

Here is a picture of the device tile: 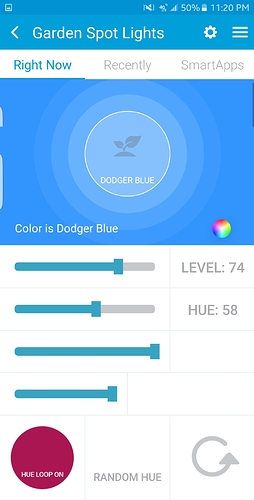 Here is the CoRE Piston 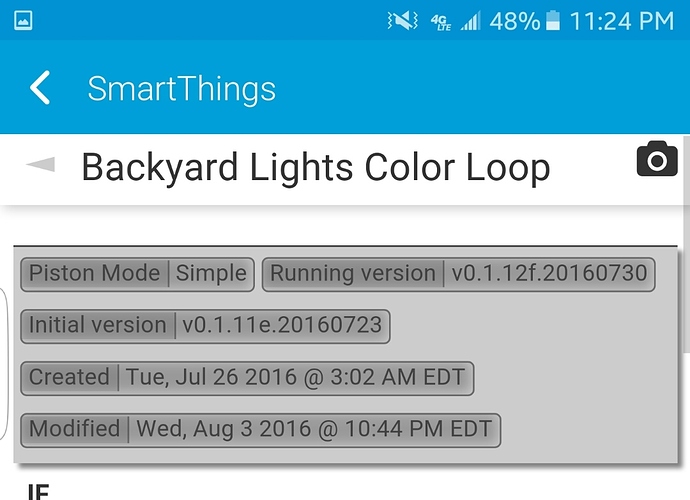 The transition time is adjustable from 1/10 second to 10 seconds. The random color is based on random hue of 1 to 100.

That is why I created the device type. I wanted my lights to go on only when I opened a backyard door and then to go off after certain events / non-events.

So I don’t need CoRE to provide the Random Color? Just flick the switch to True and turn it on?

Pressing it will randomize the color once.

Could I just have the Smart Lighting Smart App turn the light on with the Random Color set in the Device Handler and be off to the Races?

I don’t think so, but you can try.

AHHHH!!! Got you, so CoRE will be used to press the Random Hue button again.

I just set this up with my garden spots… freakin awesome!!! thanks…

to bad it doesn’t work with my blooms.

That’s great. You’ve helped me out so many times, it’s good to return the favor.

That’s great. You’ve helped me out so many times, it’s good to return the favor.

Ok, so if I have the “hue Loop” on and I have a piston turn these on… they cycle through random colors? and I have that off they just turn on at the color I set?

No. I use the hueloop (a boolean) as the trigger for when CoRE cycles through the color loop.

ok, but if I want them to just come on at the same color and level each night, I just use “Turn ON”?