When I got this device several months ago, I had a hard time finding a good device handler for it (the one officially provided by SmartThings has its shortcomings & the community provided ones didn’t work well for me). I created my own handler for it but it is hard to find the link for it when digging around through the forums. Several in the community have used it with good results.

I’m posting this now to make it easy for others to find.

Current Issues:
The Android App has some serious display issues (especially on handlers that you have to scroll down on to see all the info). This is not an issue with my handler, but a bug that needs fixing on SmartThings end. If you scroll all the way down, turn the screen off, and then on, it displays properly. 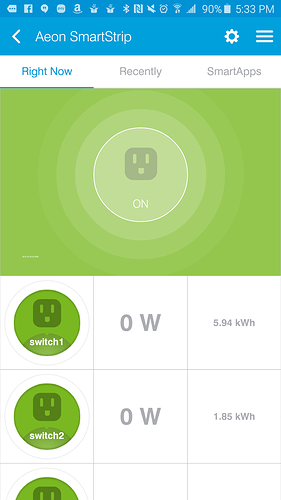 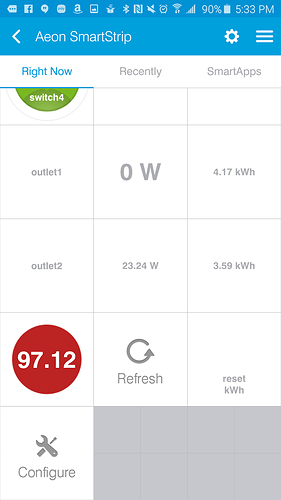 If you are looking for a way to control the four switches from SmartApps, routines, etc. Make sure you check out my Physical / Virtual Device Sync and accompanying Simulated Energy Switch:

Update (2016-09-10): I have created a new SmartApp that is an upgraded version of this one. It will create the virtual switches for you among some other things. Since it is significantly different from this app, I couldn’t just upgrade this one as it would cause problems. I definitely recommend using the new app with any new dual relays you may install, but if you are currently using this one, there is no big reason to switch over. Here is a link to the new app: This is a small app to keep Physical and Virtual Switches in sync. Specifically for use with devices such as the Monoprice, Enerwave, Fibaro, and Philio Dual Relays. As well as the Aeon SmartStrip. For best results change your virtual device handler to a Simulated Switch. If your device supports energy reporting like the Philio …

This is definitely one of my favorite DH and app combos. I use the smart strip to have individual control over my dropcam (off when we are home, except when sleeping), Echo (off when we are away) and my coffee pot (only on briefly in the mornings).

This DH and App combo allow me to use the individual outlets in my routines which is very useful.

Echo (off when we are away)

Hadn’t thought of that, This is going to happen soon since my echo count more than doubled (2 to 5)

I have to ask, why turn off the echoes?

That makes sense. I’m just thinking of how long they take to come back online… plus… how do I tell Alexa to turn on Alexa??? LOL

how do I tell Alexa to turn on Alexa??? LOL

I have to ask, why turn off the echoes?

Power saving. I’m cutting power to more and more stuff and my usage (and cost) is going way down. Occasionally I make it through the door and hear echo saying “hello” as she reconnects. It seems to boot and connect very fast.

Power saving. I’m cutting power to more and more stuff and my usage (and cost) is going way down. Occasionally I make it through the door and hear echo saying “hello” as she reconnects. It seems to boot and connect very fast

Yeah, I can definitely see that. I’ve made some huge cutbacks too. I just try to make them in ways that are completely unnoticed in our day to day lives. I can’t shut everything down like that cause my house always has a bunch of people in it.

Excellent handler @erocm1231, many thanks!!

Possible/easy to add a name/memo on each outlet for reference of which device is connected from the app?

Thanks. Unfortunately, SmartThings does not make it possible to dynamically update device handlers. There may be a roundabout way to do it, but it’s more headache than it is worth. You could use a SmartApp like my Virtual Device Sync to create Virtual Switches. Then you could name the virtual switches to whatever you want.

You seem to have a typo in your handler. Under the layout of the tiles you have switch5 & switch6 but you used outlet1 and outlet2 above. Should be:

I’m confused, mine looks exactly the same as that. I once created a special version upon someones request to look like what you have described, but it is not the one linked in this thread.

I pulled from your github I believe. I already had you added for something else and I believe the version I grabbed showed “switch5” and “switch6” instead of “outlet5” and “outlet6” which meant I had no label tile.

Here’s what I pulled from:

Looks like this is my bad, I grabbed the wrong one. The linked one doesn’t have that, and maybe this is the special one you did for someone…

Yep, that was something I made special for a user that had some specific requirement that I don’t remember.

Hi Eric, I have just purchased the Smart Strip and installed this device handler as well as the app and handlers here. This is the first custom anything I have installed for my smartthings hub, so apologies if I missed or misunderstood something.

After installing everything, I am able to control main power and switchable outlets, plus I get power readings from all the outlets. The “reset kWh” button works as well. Unfortunately the strip doesn’t seem to be reporting the outlet state. If I turn off the strip with the button or simply unplug it, it’s not reflected in the app. Also I don’t know if the Configure button at the bottom is supposed to do something or not, but pressing it has no effect.

I appreciate anything you can tell me.

I just added your device monitor app in addition to what’s there. I powered off the strip with the button and it immediately ran my custom automation to power up the strip and send me a text. It happened so fast I wasn’t able to watch the original app to see what it saw. When I did get in, it was reporting 3 of 4 outlets were powered on even though they all were on.

It seems like something is reporting the correct state of the outlets, but it’s not displaying in any of the My Home/Things.

There are a couple things going on. First, when you use the button on the strip to turn it on/off it does not always send a report that all of the relays are on or off. All the channels may be on, but the strip itself may only report that 3 of them are on. The other problem is that handlers with lots of tiles sometimes do not update until you back out of the device page and go back into it. So it can look like the relays didn’t turn on, but then you hit back and then go back into the device and see that they are all on.

Is the goal to make sure that all the fridges are on even after a power failure?