I have a Malibu ML300RTW low voltage transformer for controlling my landscape lights. It has a limit of 300 watts.

Will the GE receptacle work for turning this off and on, or should I look at something else?

The problem with the transformer timer is that it is completely mechanical, and I have to periodically move the little gizmos for turning the lights off and on to account for the changing length of daylight hours throughout the year. Throw in a power outage or two, and my landscape lights are on at midnight and off at noon !

I would simply put the transformer in the ON position, remove the little trigger gizmos, and then use a simple sunset/sunrise schedule in ST…

Any suggestions costing less than $70 bucks would be appreciated… ha!

I have a 600 Watt transformer for my garden lights (even though I swapped out all the halogen bulbs with cheap Chinese LED’s and only uses total 95 Watts).

I used a plug in dimmer Module (Remotec) rated for 300 Watts buy it died after a few days… The surge when the transformer comes on perhaps exceeds the average 95 Watts?).

Decided that dimming not necessary for now and use an “appliance” rated module instead… The old model Aeon is working great only $29.

I want to do the same thing. I have two boxes that are very similar. I have thought about just putting in a GE Z-wave switch - would that work?

I have thought about just putting in a GE Z-wave switch - would that work?

If the system takes 120v input voltage and you can disable any integrated mechanical timers, then sure!

I recommend outdoor rated module probably (Amazon). My Aeotec works even in a metal box.

Any suggestions costing less than $70 bucks would be appreciated… ha!

Get a transformer with built-in light sensor. Not super-hi tech, but works like a charm.

I am using this with the GE outdoor module without any issues: 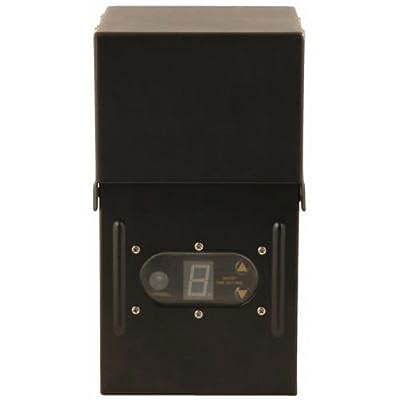 This convenient control box makes it easy to coordinate your landscape lighting. With a sensor that tracks the onset of dawn and dusk, the box can be programmed to automatically turn the lights on, ke ...

Thanks, @tgauchat! I ordered the Aeon Gizmo today… With a capacity of 1,875 watts, it seems like the easiest choice.

@geko, and @Mbhforum, I considered that as well, but having Smartthings in the Mix will allow me to turn on at dusk, then turn off at, say Midnight… (don’t really need to impress the neighbor with fancy lighting all night long", back on at 5 am, and off at sunset… I can also add a motion sensor to turn on some outside lighting for some level of security …

The Aeon was 30 bucks, which leaves an extra $40 for quite a few ice cold beverages!

The Aeon was 30 bucks, which leaves an extra $40 for quite a few ice cold beverages!

Glad I was able to help, congrats on the savings, and you’re welcome to message me anytime.

Alas, I think only a Community administrator like @April or @Ben can dispense a “Virtual Beer” badge

Even though the transformer I have has a light sensor I programmed it to ignore that and still use Smartthings to turn it off when I go into sleep mode. It works great!

Biggest problem is fitting it in the box behind the outlet. Be sure to orient it such that you can reach the button without taking everything apart. It took me literally 2 or 3 hours to install one of these.

You can get new transformers (Portfolio) brand that have a manual mode at Lowes for around 40 bucks. My lights are half led/half halogen. I believe these were 200Watt Transformers. I put them on Manual Mode and then paired them with the GE Outdoor Z Wave Switches and then use Smartthings to control on/off.

Good advice. Do you know if the switch allows you to control both outlets in a duplex?

That’s up to you. In my case I needed a non-switched outlet there as well. So I just broke the little piece of metal that ties the two outlets together. Also, your outlet should be on a GFCI somewhere, and often those are daisy chained together. So you’ll have to check that and deal with it.

You mean there will be a GFCI upstream? How does that effect this?

It’s just a wiring detail to be aware of. It varies all over the place how it’s done. In my case all of the outside outlets were stringed together off a single GFCI. The thing is simply to preserve the wiring you find in the box, but for interrupting the load to one outlet. You may or may not find extra wiring in the box. Just be sure to write down exactly how it’s wired before you start.

Got it. Really helpful, thanks for the explanations.

Hey @Mbhforum! Sorry to revive an old thread… I have the 200W version of this transformer, and just set up a GE outdoor module today, and the outlet itself works great with ST. The problem is, my moonrays transformer does not restore its state when it regains power, so when I turn the outlet on, the transformer (and thus the lighting) stays off until I hit one of the buttons, which sort of defeats the purpose. Did you run into this problem? I don’t have (and can’t find online yet) the manual for the transformer, but am doubtful that they built in power config options; just thought I would ask since it seems you have the exact same setup. thanks!

My transformer is plugged into an always powered outlet outside. Is yours? Or is it plugged into the GE module?

Thanks for the quick reply!

I see… I misunderstood your setup. Sounds like you instead have the transformer always on, and you put the switch between the transformer and the lights, which makes sense if you use the right kind of switch.

I was trying to get it so that I could toggle the power to the transformer remotely, as the reviews on amazon indicate that the unit is able to restore state following a power outage (see: https://www.amazon.com/review/R188IC5OE4JQ5N). I ended up buying a new one to see if the new one behaved differently from the old one, and it does! My old one does not restore state; the new one out of the box would always restore to “A”, which is light-sensor auto. The problem with that is that it takes 30 seconds for the light sensor to recognize darkness. After some tinkering, I got it to change the restore-state to “0”, which is always on. I don’t remember the key sequence I entered but it was some combination of holding up & down at the same time. But now when I toggle the outlet, the transformer goes directly to “0”. I suspect this is slightly better than keeping the transformer on all the time, but have not verified or quantified that claim.

Interestingly enough, I had also shot an email over to Moonrays, and they just replied today saying that the unit restores to “off”… which isn’t true (at least, not with my new one). Sounds like they don’t know their product very well

Long story short, in the end I got it working.