FAQ: Can I add a keypad to control my garage door?

I have an iris zwave garage door controller that works great with smartthings. I also have a zwave front door lock that comes with a keypad on it.

My family is now asking if I can add a keypad to the garage door.

I love the way that I can use smartthings to manage multiple codes for the front door. Is there some kind of zwave keypad that I could use for the garage door with smartthings in a similar fashion to the front door lock?

You have three simple options.

First, if it has to be zwave, you can buy a Z wave touchpad deadbolt lock and embed it in the wall of the garage. So it’s not actually unlocking anything, it’s just transmitting the code. That works fine, it’s nicely weatherproof, most people like the looks, it’s just that it’s an expensive solution.

The new qkwikset obsidian lock has been Z wave certified and is due to start selling soon and would be pretty much perfect for this. 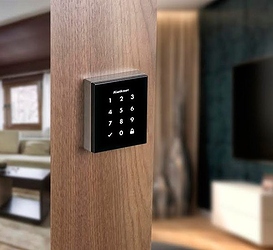 Or if you don’t want to wait, the Yale Assure is another option. Just make sure you get the Z wave model, not the Bluetooth.

There are less expensive versions as well, I just happen to like the looks of both of those. But basically you just pick any deadbolt that you like and don’t use the deadbolt part.

It’s manufactured by BEnext, but also sold under the Zipato name. 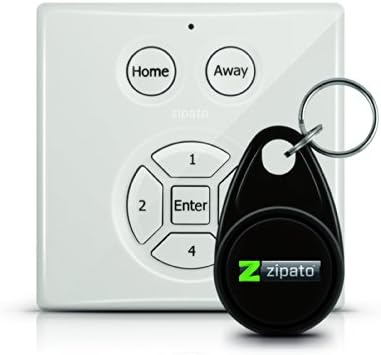 I personally use an iris keypad in a waetherproof box I got from amazon.
Arlington DBK88C-1 Weatherproof Security Keypad Cover, Clear https://www.amazon.com/dp/B003JQL0WO/ref=cm_sw_r_other_apap_YfADJYmwh6VYL
I then created a modified keypad manager based off of the echosistant security suite that allows you to add multiple codes to open and close the garage door. I can share it with you if you would like.

Thanks for the info! It doesnt have to be zwave so the iris keypad seems like it could be a good option. I like the deadbolt option too but thats a little pricey for a keypad.

So if I were to get the iris keypad, how woudl I set it up to open/close the garage door when a correct code is entered? and how can I manage the codes?

jordon - yes i would love to take a look at the keypad manager you have. is it pretty simple to setup and use?

I then created a modified keypad manager based off of the echosistant security suite that allows you to add multiple codes to open and close the garage door. I can share it with you if you would like

Hey Jordan,
I’m redoing the security and keypad features of EchoSistant. I’d like to see what you’ve done with it to help improve the base code.

Oh yes it’s quite simple to set up. Use the community created code here to add the keypad to your hub.

Then copy and paste the keypad app I made here. ( I honestly haven’t really done this before do don’t know how I can add it to github. After trying for a while this was the best I could find on quick notice.)

This will give you the option to add up to 10 different users and codes for a garage door you would like. Code then on= open. Code then off=close.
It’s still the basic keypad manager app with the garage feature added on so can still arm/disarm system with this app as well.
Been working like a charm for me for a few months now.

This will give you the option to add up to 10 different users and codes for a garage door you would like. Code then on= open. Code then off=close.
It’s still the basic keypad manager app with the garage feature added on so can still arm/disarm system with this app as well.
Been working like a charm for me for a few months now.

I’ll take a look at this tonight. Just so you know, in the upcoming release of EchoSistant the keypads are integrated into the profiles, giving you almost endless possibilities with configuration.

I just sent you a message with the edits I made to the code and some feedback I got from others.
So when you say it adds more configurations do you mean it will be able to control more than just the garage door?

I just sent you a message with the edits I made to the code and some feedback I got from others.
So when you say it adds more configurations do you mean it will be able to control more than just the garage door?

Awesome I’m anticipation the release! Thanks for all the work you do. It is very greatly appreciate.

Notice I didn’t say you would install it “on the outside of the garage.” I said you would “embed it in the wall.” You typically have to cut a hole into the wall. Depends on the thickness of the wall as to what goes inside the wall and what can go on the other side of it.

Demo board: A piece of a door just big enough to hold the lock

If you’ve ever seen a lock on a demo board at Home Depot or in the trade show pictures, that’s basically what you’re going to start with for either approach. 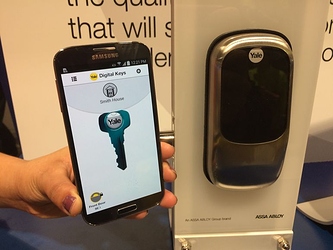 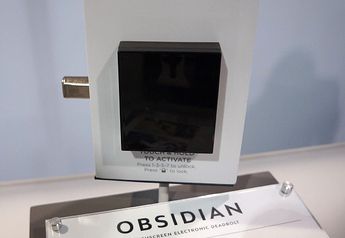 Option 1: install the lock on a demo board, then attach the demo board to the outside of the house

If you’re OK with it being raised up off the side of the wall by enough space to hold the back part of the lock, you can just attach the whole thing to the exterior wall without cutting into the wall at all. You just have to figure how you’re going to secure it. I think most people in that case would put the whole demo board inside a locked case so you unlock the case and then use the keypad.

just remember that you will need to be able to change batteries from time to time.

Option 2: install the lock on a demo board, and put the demo board inside the wall with just the keypad showing on the exterior

If you actually embed it into the wall, then just the keypad part will be on the exterior, the deadbolt will be inside the wall, free to move but not locking anything, and you will have access from the other side of the wall to change the batteries.

Embedding it looks nicer and may be more convenient if you would otherwise need the lock in case, but it’s a much bigger construction project.

You’ll want access from the interior side of the wall so that you’ll be able to change the batteries when needed.

It’s similar to installing a mailbox slot in the wall except that the interior width of the cut out will be bigger then the exterior piece to allow for the deadbolt. So you will probably place the demo board from the interior side (where you will make a bigger hole).

So again, pretty similar to installing a pet door. You may want to “tunnel” Frame inside the wall, again also just to hold everything in place. 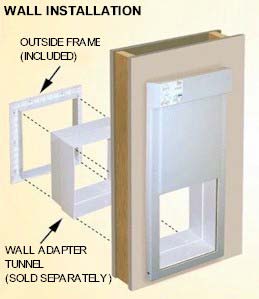 Of course, it all depends on the material of the wall you want to put it into. If that wall is brick, That means Masonary saws and a lot of specialty equipment and you might want to have an experienced contractor do it. All of which is more cost and money.

So a lot comes down to whether you are OK with the aesthetics of just surface mounting the entire demo board, and whether that give you enough security in your neighborhood to keep people from stealing the lock itself.

Interesting idea, has me wondering if I could enter a code into my door lock that would not necessarily unlock the deadbolt but would open my garage door instead. Hmmmm

If you just want Garage Door control via a keypad, then I personally think it is simpler, safer, and more reliable to get an official compatible Garage Door Remote keypad appropriate for your brand and model of opener.

The only disadvantage is it will be obsolete if you change Garage Door brands. 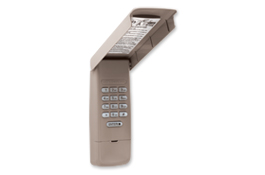 @tgauchat I generally agree with you here, a basic coded garage door remote is simplest and secure enough for MOST users. Some of us however are looking at options to provide single use entry codes for contractors, family members, house sitters, etc. Also the ability to remotely revoke code access or put the garage on lockdown when on vacation etc. We all know that there is a good chance we will never change that code since the process of reprogramming an access code on a garage remote is more intensive than accessing the app and re-issueing a new remote code.

I think the best of both worlds (price excluded)is the solution mentioned above where you wire a deadbolt to the garage wall. If you tie a successful unlock to the open action you could even use the lock mfgr’s single use bluetooth keys as easy access without a digit based code. Added benefits of using user based codes through smartthings, is the ability to notify parents of their kid’s getting home (and entering through the garage instead of the front door), turning on lighting inside the house for safety, etc.

I personally am not sold on the cost/benefit ratio of this solution in my own situation, but i know many people that would not bat an eye at spending the extra money for the added security/tracking/notification that comes with this option

Here’s another option if you have access to RBoy Apps. It supports the Xfinity/Centralite, IRIS and the newer UEI model keypads also.

You can use this to synchronize it with your other locks or switches, essentially use these cheap keypads to control your garage doors or be an extension to your existing locks.

You can also check out the Lock & Door Synchronizer app and other similar apps to synchronize your keypad with other devices.

Introducing the Lock and Door Synchronizer Automate your property, create unlimited combinations to keep your locks, doors and switches in sync. Examples of how folks are using this app: Create extry/exit corridor lock setup, a outside lock and insider lock, e.g.: Synchronize both locks to lock/unlock together when one is operated Enforce no piggyback, when one lock opens, the other closes and vice versa Set an exit door, when the inside lock unlocks, the outside lock unlocks but NOT vice versa Whole property management, lock/unlock all locks when the primary lock is operated Synchronize your patio door with your primary lock Synchronize your garage doors/gates with your primary lock Synchronize your keypad with a garage door (requires Enhanced Keypad Lock device handler) Lock other …

If you want to treat it like a “lock” and create your own codes you can do with SmartLocks or a similar app like this one to create codes and then take actions when someone uses those codes. You can also synchronize your codes with all your other locks to keep a single code across all locks:

I recently bought a Craftsman opener. The keypad allows you to create temporary codes and specify the # of times the code can be used.