Related/unrelated question: every time my hub gets an update or restarts, the time gets messed up.

My time based routines obviously don’t trigger at their correct times after this happens.

Is there something i can do on my end to force the hub to resync it’s clock?

EDIT: This may not actually be a hub issue.
I just noticed that it only seems to be my Ikea Tradfri smart outlets that aren’t working properly following an update/restart.
The SONOFF Smart Outlets I have that have a 4:00 PM time based routine, and that worked as expected.

I took a closer look at the two different smart outlets I’m using and the one that is working as expected is using the Power On and separate Power Off routine options associated with the Zigbee Switch and Zigbee Switch Mc Edge drivers.

The “Power on and off” routines normally work fine, unless there has been a power outage or hub restart during the schedule period.

Power on and off” routines normally work fine, unless there has been a power outage or hub restart during the schedule period.

Ok, and after a while has passed since the outage, does this come back to normal?
Can you share the name of those routines, please?

After some time has passed, they do go back to their normal execution.
I manually turned on the switches and will watch them later to see if they shut off at 9:00 PM as programmed, or if things remain out of sync until tomorrow’s routines run.

@nayelyz 10:00 PM EDT and the switches haven’t turned off yet.

Manually turning them off.

Back to normally working schedules today.

My assumption would be that there is an on hub timer involved that loses track during a restart, etc.

I am currently taking a look at this. I will let you know whenever I have an update.

Just wanted to advise that we experienced a power outage within the last half hour.

Good to know, @BlackRose67. Thanks for letting us know about it, I already notified the team.

Just wanted to let you know that yesterday’s power outage was approximately 18 minutes.

Normally by the next day the time issue is resolved, but this morning all of my time based routines are still 18 minutes late in triggering.

Just checking… are any of these using Smart Lighting?

No, the ones acting up are all using Edge drivers.

The only device I have using the Smartlighting app is working normally.

It looks like most of the devices/routines have sorted themselves out.

I suspect the two aquarium timers that use the multiple on an off logic will still be off by 18 minutes and will work normally tomorrow.

I’m experiencing the same thing with my On&Off routines. They just don’t get triggered, no outages to speak of. The app momentarily show a connected plug as “On”, but after syncing displays the Off

This is what I set up. 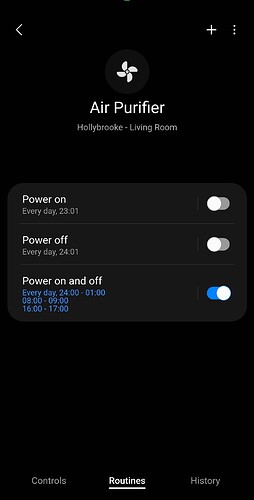 Interesting that yours don’t work properly at all.

Mine only go off the rails if there has been a power outage or hub restart during one of the “break periods”.

It’s very weird. For example, every other day or so it turns on at 10:00pm, even though, there are no routines present for that time. I vaguely remember creating one for it a few weeks back, but quickly deleting it. Yesterday, it dud come on at midnight, but never turned off.