We will begin rolling out Samsung SmartThings Hub firmware version 0.45.9 starting Monday, October 17. Once downloaded, your Hub will briefly go offline as it reboots and applies the update; most customers will experience less than one minute of downtime. We will update the status page when the release is complete.

Note that this release may be spread out over a week, so you may not see your Hub update the first day of the release period.

Fix for locks that use the LockCodes capability

Do these updates need to be pushed out to the wifi hubs as well?

it "should"and it “will” eventually.

I saw this on TheVerge: Samsung SmartThings hubs will be upgraded to Matter this month - The Verge
I do not understand this announcement. Can someone please clarify?

“…an update later this month will turn Samsung’s standalone SmartThings hubs into controllers for … Matter. The v2 hub will control Matter devices over Wi-Fi and ethernet, while the current hub and SmartThings dongle will also act as Thread border routers… While the upgraded hubs will still support Zigbee and Z-Wave, they won’t be Matter bridges, at least not anytime soon … SmartThings users will be able to continue to use those devices connected to a SmartThings hub, but existing Zigbee and Z-Wave devices won’t be exposed to Matter.”

Copying my reply to you from the SharpTools community

You can bring matter devices into the SmartThings ecosystem and use them in apps like SharpTools, but SmartThings is not going to output its native Zwave and Zigbee devices to other Matter hubs.

So I think answers to your bullets are yes, bridge=output, v3 hub has thread but not v2, and I wouldn’t upgrade unless you specifically need Thread since theres no migration tool

This link and this other link describes some of the differences, but the ones most people care about:

There is no migration tool to move zwave and zigbee devices from one hub to another. You’d have to re-pair/include each of them and recreate their routines.

Thank you to @ChrisC4 and @csstup.

Thread isn’t a big deal to upgrade. If you have one Echo 4th gen, an AppleTV4k2, Nest Hub or any other thread hub, just one of those would connect your thread devices to IP networks which your ST hub could access with just ethernet or wifi of its own.

does this have anything to do with my Yale smart lock and automations that suddenly stopped working today?

turns out the hotfix they did recently is what caused the issue. i got 75% of it working again.

My wifi mesh hub starting broadcasting its DHCP to the WAN uplink port last Wednesday. Nothing changed in my configuration (as this is in a remote location). Would a firmware update have been released recently that might have caused this? The service provider has disconnected my service temporarily and the network is offline until I can figure out why it’s broadcasting to the WAN. Not sure how I can even get a fix update, since I have no connectivity. 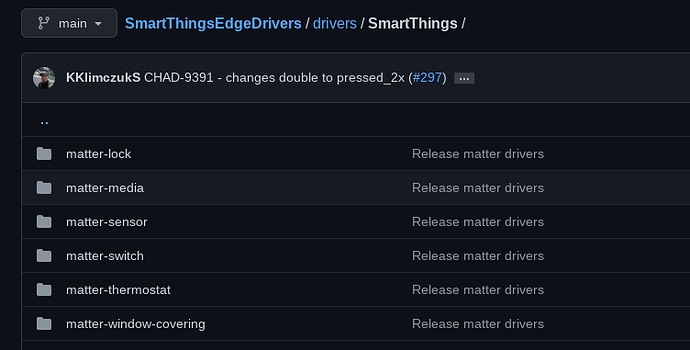 yeah, Matter edge drivers were moved in 6 days ago. It seems the backend is prepared, hub firmware is rolling out, so now we’re jsut lacking the UI in the mobile app for it…and actual matter devices to add.