I have several 3-way switches in my home. I have been using the GE 3-way switch and add-ons. However, I wish the Add-on switch had an Indicator light as well. I’ve tried a few Linear WZ001 switches (which have a green instead of the blue indicator) but they are only z-wave devices and don’t seem to respond as quickly as the GE traveler wire switches. Does anyone know or use some kind of 3-way add-on switch which has the “led indicator” light AND utilizes the traveler wire (doesn’t rely on zwave to control master)???

Thanks for your thoughts, ideas and suggestions!!!

Leviton addon has led and is cheaper than GEs addon. And has traveler.

That’s cool… I never saw those before. Do you have a link? I do kinda hate not seeing the LED when I have an Aux in a bank of two or three switches. 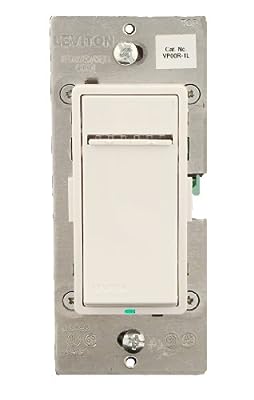 These match DZMX1 or VRMX1 dimmers from Leviton, and work with either in 3-way or 4-way. Visibly identical to main switch, which is nice.

Was thinking of VP0SR-1LZ, which is significantly cheaper. 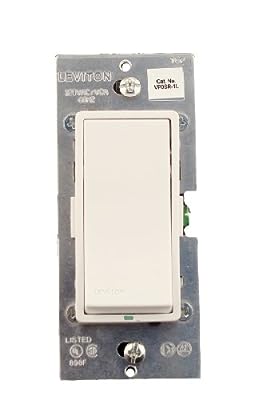 Levitons Vizia Collection was named by Electronic House magazine as one of its top products for 2006. The Vizia Collection is a technologically-sophisticated family of lighting and fan speed controls ...

Ahh, didn’t even know a dimmer addon exists. Thanks for sharing.

The problem is, that Leviton is not a rocker. Some people don’t like that. And the downside for Leviton, is that ST doesn’t report the state instantly. Food for thought

My house was all dimmers when I started ST. We ended up with the Leviton because they come in Ivory, which matched what was already here. They comes with white, almond, and ivory faces.

And the downside for Leviton, is that ST doesn’t report the state instantly.

Do you know of any other instant reporting switches or dimmers?

Yeah, Levitron is definitely an instant reporter. And yes, I believe you’re right that Levitron and Cooper are the only big names that pay the Lutron patent to be able to instantly report.

Some of the aeon micros also allow for instant reporting with a parameter change, but not all. Look for “hail” support.

As far as I know, those are the only instant reporters that are compatible with SmartThings.

There are others that are not compatible with SmartThings, including several zigbee options like control 4 and crestron, and of course Lutron themselves.

Lutron Caseta has an IFTTT channel so there’s an indirect interface, but you’d lose any advantage of instant reporting in the cloud lag.

Well, the more expensive Leviton are instant. The DZS series isn’t. The best part about the GEs, is that even though they are not officially pushing instant status updates, with ST are near instant the lag is less than a second. Besides price level, that was the main reason my switches are 80% GE now.

If you want a master go with GE, that’s what I did. I wasn’t found of mixing blue and green LEDs, so I gradually moved around switches to make rooms color consistent.

Well, the more expensive Leviton are instant. The DZS series isn’t. The best part about the GEs, is that even though they are not officially pushing instant status updates, with ST are near instant the lag is less than a second. Besides price level, that was the main reason my switches are 80% GE now.

Really long explanation of how this works with geeky stuff, so if you don’t care, skip this post.

If anyone is wondering how they update so quick when they can’t report, here’s the info that ST gave to much a long time ago. I’m assuming this is still the method used.

Anyway, Lutron holds a patent on the concept of a switch reporting to the hub/controller when it’s physically pressed. Now, how a patent was ever granted for this rather obvious “break through concept” I don’t understand… I mean this seems like the pretty basic idea of how networked device work, yes? But anyway, Lutron holds the patent. So anyone who builds a z-wave switch that updates status to the hub has to pay a fee to Lutron. Generally speaking, when a manufacturer does the switches are more expensive (Lutron, Cooper) and when they don’t, they are cheaper (GE/Jasco, Evolve).

So, if the switch can’t send it’s status to the hub, how does ST know when you turned on/off a switch? Well, whenever you hit a switch it sends a sort of z-wave network command. Just a refresh or node update… it’s no saying anything specific about what happen, just a node “refresh” or whatever. What ST does is look for that refresh thingie and which switch it came from. Then it assumes that the switch was physically pressed in order to generate that “whatever” and so does a poll/refresh of the switch to figure out what state it’s in.

It’s a clever and patent free way of getting near instant update of switches. There are a few problems with this method though:

Understand that this was info I collected from probably more than a year ago. It’s entirely possible that ST has done things to refine or changes how some of this works.

I’m strictly GE/Jasco for much the same reason… wanted the same look, color throughout.

I did put a few Evolves in my bedrooms because I wanted dimmers with a neutral and GE/Jasco’s were not available like that. However I’ve found the Evolves to be slightly temperamental with pairing with ST and completely impossible to pair with the secondary remotes from Intermatic that I got for my kids rooms, so I replaced those with GE dimmers that had neutral I found later.

Your millage may vary of course.

If anyone is wondering how they update so quick when they can’t report, here’s the info that ST gave to much a long time ago. I’m assuming this is still the method used.

This isn’t quite what happens with instant reporting. For the Leviton VRMX1, when the switch is pressed, it sends a hail() command, which causes the hub to query the device. hail() can be sent through the mesh, with minimal delay; however, the switch will only send hail() if it was paired directly to the hub when included. Evidently, this function is covered by the Lutron patent, as only the VRMX1 sends it, and not other Leviton dimmers.

When setup in 3-way and 4-way installations, the VRMX1 and its aux switches are all instant reporting, although, actually, the aux switch doesn’t send anything. The VRMX1 sends hail() when the aux switch is pressed.

whenever you hit a switch it sends a sort of z-wave network command.

I’m really curious what z-wave command a GE switch sends. There isn’t a “sort of z-wave network command” or a “whatever” command. It can’t be sending hail() unless that’s under a Lutron license. So check the logs and see what it actually sends.

I’m really curious what z-wave command a GE switch sends. There isn’t a “sort of z-wave network command” or a “whatever” command. It can’t be sending hail() unless that’s under a Lutron license. So check the logs and see what it actually sends.

I can’t recall what it was that they said it sent… Node update or ??? Like I said it was many, many months ago when I talked to someone about it.

Yeah, technically that’s not actually what happening, although I can understand how somebody might describe it as happening that way.

The actual workaround is normally done through one of 2 zwave methods:

(I think you and I have briefly discussed the patent issue before but let me just say again that the patent was issued at a time when no one was doing it and a lot of engineering research went into how to do it. The patent was done long before Z-wave even existed. So yes, it was a significant breakthrough at the time. And patent-worthy. A lot of things seem obvious after they’re done the first time.

OK, the two different methods that are actually used for z-wave if you’re not using the patent protected hail.

Association allows the switch to send a message to the hub by including the hub in the association group. I’m pretty sure this is what the support person was trying to describe. What gets sent is a “basic” message, which would be an on/off to a light switch. The hub can be smart enough to realize, “oh, I got a basic request from this association group, that must mean that there was a state change.”

Polling is just polling. The hub initiates the request to the switch for its current status. It works, it’s just expensive in terms of network traffic and energy draw because you’re doing some polling when nothing is actually change at the switch. But just as an example, the SmartThings hub polls the Phillips hue bridge every five minutes for status. Noticed that this command is initiated by the hub, not by the switch. That’s why it’s not a patent violation. It’s also the way everything used to be done until Lutron figured out how to have the switch initiate it only when a state change occurred. Polling used to be the “obvious” way to get status updates.

Thank you all for the useful information! I greatly appreciate it. I’ll take a look at the various switches you have mentioned in this thread!