Having a weird issue. Installed the Zooz ZSE29 motion sensor on my porch to turn on the porch light for 15 minutes when motion is detected. Works just fine at night, but doing my testing during daylight i noticed the light will turn on and then turn off after 30 seconds. So why is it turning off after 30 seconds when i have a 15 minute delay? I also noted while the light turns off after 30 seconds, the switch status in the App shows “on” even though the light is off. Then after the 15 minute timer, the switch status will change to “off”. Not that this is a real issue because i don’t need the light to turn on during the day, i’d just like to understand why its doing this? Maybe something to do with the edge driver, but maybe not and wondering if anyone has a clue why its behaving this way? Thanks

I don’t know if this applies, but a common reason for a switch to turn off that quickly is you’ve triggered an overheating mechanism within the switch itself.

If that’s the problem, you should see also the behavior when you turn the switch on manually, not just with the motion sensor.

And if it is overheating, the first thing to do (after turning off the current, of course) is the check all the connections to switch, and in particular to look for dust, or frayed wires or wires that have come a little loose. After that, look at the possibility of overloading the circuit with too many things turned on. And after that, it would be time to contact the device manufacturer and see if the switch has become defective.

If you swap that switch out for a different switch, and you see the same behavior, then it’s likely something in the wiring and you might need an electrician to check it.

On the other hand, if everything seems fine with the switch itself and you’re only seeing the behavior during the daytime, do you have any automation set up that check for lux level? So that it’s turning itself off because it’s too bright?

I don’t think overheating is the issue, again works fine at night. I suspect it has something to do with LUX level but i don’t have any rule setup for that. The motion sensor has LUX reporting which i have enabled (every 60 minutes) and LUX trigger is set to 1 (disabled), but i wouldn’t think either of those would be the cause. All the motion sensor is doing is triggering a routine to switch on the light, and that routine has a 15 minute delay before it should turn off the light. I also tried different delays for turning off the light, 20 minutes, 60 minutes, etc, makes no difference, 30 seconds is it. I have a Hubitat hub and might try connecting the motion and switch there to see if that makes a difference.

Strange, but that sounds like a good next step.

Meanwhile, can you post a screenshot of the routine?

How old is your DZ6HD dimmer? I have a couple of them that had strange problems. Updating to newer firmware fixed the issues. But that was 3 years ago.

Thanks for all the replies… turns out it was the bulb. This is a EcoSmart LED dusk to dawn bulb, so it senses daylight and turns itself off… pretty neat feature. Anyway, changed to another bulb and it works as it should. 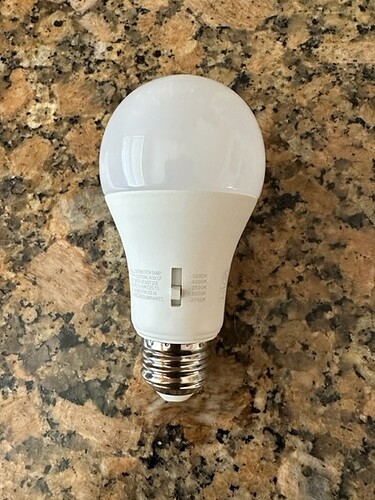