Zigbee/zwave door lock compatible with double cylinder/(key on both side)?

is there such … things ?

I don’t know of one offhand, but I would contact Assa Abloy (they make Yale Locks among others), they may have one from their South American market that could take one of their Z wave radio modules.

They make most of their connected locks so that you can swap out one type of radio for another, so even if it’s not typically sold in that configuration, it might be possible to put it together.

They also have a whole line of locks for office buildings and stores which typically are double cylinder and again, there might be a combination of pieces that put together would give you what you want.

I know that in the United States fire codes for homes generally discourage double cylinder locks, but they are very common in other parts of the world. I think it’s worth investigating.

Let us know what you find out! Choice is always good.

I know that in the United States fire codes for homes generally discourage double cylinder locks, but they are very common in other parts of the world. I think it’s worth investigating.

I also believe this… Though my use case is a large street door to our garden / yard (ie, entirely outside on both sides of the door).

The yard has a fence which can be climbed over, but I don’t want to encourage that by having a manual bolt throw on the yard side of the lock.

I hope a product is found…

OK, I have confirmed that Assa Abloy does have double cylinder locks for the Australian market under two of their brands, Lockwood and Nexion, that can be fitted with Zigbee or zwave modules.

That doesn’t mean you can put one together for where you live, or that it would work for SmartThings, but it’s definitely a place to start. Especially since @tyler already said that smartthings is working on official certification of The Yale 220 Zigbee lock, and already has it for the yale 220 zwave lock. Those are both single cylinder locks, of course, but in any case there are some possibilities.

So I’m not saying this is easy, or something you can just purchase right now, but I would just check with as Assa Abloy and see what they say.

I’m going to include a link to a product brochure for Australia, with the understanding that even though these locks look great, I am not saying that they will work with SmartThings right now, even in Australia. I’m just saying there are some double cylinder zwave locks being made.

Ah thanks, did not think about the US fire codes.

my issue is with kids like to open the door (curious type) so i add a latch, but wife keep forgetting about latch and also the door can’t be opened with latch engage from outside, so creating another issue.

with key on both side, i thought that will answer the forgetful wife as she always need a key to open from inside, and kids can’t mess with the deadbolt lever as it require key.

but again as mention, if there is fire in the house, i think it can become an issue.

but hey with home automation, i can engage the zigbee/zwave door lock open when the fire sensor detect fires. unless the fire disable the home hub first before it reach the fire sensor, or if the internet is down with the way hubv2 works now. so that is another issue.
I don’t think it is a good feature for the door lock to automatic open when loss communication with the home hub …

I think we need redundant home hub … put it on different corner of the house.
Alas, no redundant hub with the same zigbee/zwave device.

Perhaps will keep the current way with latch and deal with the forgetful one and no access with latch on from outside until the kids big enough to understand not to mess with the door lock.

unless there is other solution …

You could put a contact sensor on the latch so you get a notification if it’s left open for more than five minutes. And then you could also check if it was left open without having to go look at it.

Hi all. I’m new to Smartthings. I am not up and running yet but working on getting devices. I want to have automated locks for front and back doors of my house, but both doors have windows and thus the locks are dual chambers (keyed inside and outside). I cannot find any dual chamber automated locks anywhere. Any suggestions? What are people using in this situation?

What are people using in this situation?

Standard locks. Unfortunately, most fire related building codes require entry and exit locks to not require a key on the inside.

Unfortunately, most fire related building codes require entry and exit locks to not require a

I know. But if they’re gonna break a window, I would think they have many ways to get in.

You can have a locksmith come out and double key most conventional dead bolts, but I’ve yet to see a smart lock where this is possible.

But if they’re gonna break a window, I would think they have many ways to get in.

I agree, but why make it so easy?!

I replaced my side window with glass block. But using the security window barrier like @JDRoberts suggested is more secure and popular.

FYI: go ask your local police about break-in’s in your city and the most common way for the break in. In my city it is not through the front door. I was told the typical way was to ring the front door bell to see if anyone was home with the fake story why they were there if someone answered. The break in occurred at the back door where it was easier to conceal their activity from people and they just kick in the door, dead bolt or not. They would grab whatever high value items they wanted and simply opened the front door or garage door for exit in minutes before there was any chance of a response from authorities. I ended up installing steel security gates across both front and back doors with Schlage smart locks. My backdoors are french double doors which are the easiest to kick in.

Why break a window when a quick kick to most doors will cause them to blow right open.

There is also a film you can place over the window to make it nearly impossible to break out. Some are expensive but amazon has this for $40. 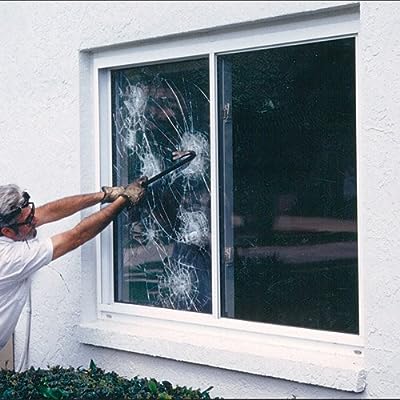 My previous house had a double cylinder deadbolt in the rear (kitchen) door which had glass panels and a standard single cylinder on the front door.

I replaced only the front door with a smart lock, since that was the least likely point of entry for a burglar. I figured if they were going to try anything they would come around the rear, which was hidden from street view.

I still put a camera and motion lights in the back though, but I never felt like it was a good idea to have a simple lock within reach of a glass panel.

Thanks, everyone, for your comments and suggestions. I appreciate them all. I may replace the front with a standard single chamber z-wave lock and leave the back door alone (I.e., not automated).

You can also add a Glassbreak detector for that window, which can trigger a siren and an alert notification. These are pretty big, typically the same size as a smoke detector, but they don’t have to be put right on the window, they can be a few feet away on the wall or ceiling. They’re just listening for the specific acoustic pattern of breaking glass.

Any z-wave (or zigbee, I guess) glass break detectors tha people know work with ST? Thanks.

Nothing on the official compatibility list, but a number of community members are using the Z wave Utilitech Glassbreak sensor with the following community-created dth:

Depending on you door, the Schlage Connect has a kick alarm that would probably sound if someone hit the glass hard enough to break.