How far are you hubs from the WiFi router?

About as far as you can get. Two floors away and on non clashing channels. In a straight line about 30m through multiple rooms on the other side of the house. To the point that I get zero WiFi reception where the hub is.

To the point that I get zero WiFi reception where the hub is.

May be that is your problem. The WiFi and Zigbee operate in the same frequency band of 2.4GHz. So the path loss behavior for the two will be similar. If your WiFi has no coverage where your hub is…The sensor may be having a tough time talking to the hub due to the same path loss characteristics. You could probably try couple of Zigbee switches or outlets in between to act as repeaters? Do you already have that? Its worth giving it a try.

I just reopened a ticket of mine from early June, my zigbee devices started acting up since yesterday. I have a cree bulb that I can’t turn off and my multi-sensors are only reporting temperature.

I had interference in the beginning so I moved the hub away from the router and it’s been in the new spot for 3 weeks now, then yesterday back to the same issue.

I have a lot of devices including powered ones please see my op. What we are looking at are single devices randomly locking for extended periods and everything else fine, in this example 37 hours. This device in particular is a great example as it is in a very busy location in the house and has not missed a tick in many months. Great opportunity for ST support to learn from. Anyway I’ve been contacted by @vlad and his colleagues who are looking around my system for clues.

Out of desperation last night, I moved 2 of my wifi router channels both to channel 1, my zigbee is on 20 – what do you know, the devices started reporting!

Things are still being looked at but here’s another one. 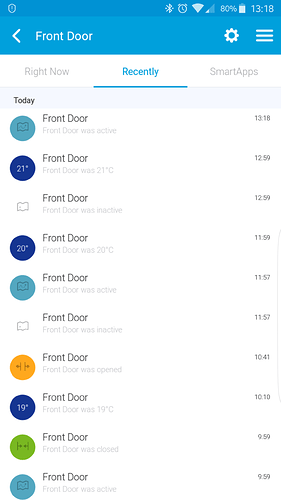 Just an update. I’ve had a few more devices lock up over time and as if by magic @vlad from support has experienced it in his own system now. (somehow my issue has spread to him

). Hopefully our findings will help create fixes in the future to increase stability.

I seem to have stumbled onto the root cause of my smartthings and orvibo sensors dropping off or freezing. Moving all but 2 of my osram bulbs from being directly connected to smartthings onto the hue bridge instead has finally stopped my ST and orvibo sensors freezing and dropping off.
Since osram bulbs are officially supported I hope smartthings eventually fix this. It looks like the bulbs are occasionally deciding to act as poor quality repeaters causing g general flakiness.
I went from needing to reset 1 or 2 sensors every day to complete stability for 2 weeks.

I wish I would have seen this discussion earlier, because I had exactly the same problem with Zigbee reliability a few months back. I don’t have a hue bridge, so I just removed all my Osram bulbs completely from ST. Ever since my Zigbee reliability has been rock solid.

Thank you both for posting this today. Just found two Osram bulbs that I haven’t been using and was literally getting ready to put them back in ST. @a4refillpad

@johnconstantelo & @a4refillpad do you guys have any GE links in ST, I have finally replaced all of my GE with Hue on the Hue hub but kept two GE PAR 38s, which I brought back to ST after almost a year. I hope I don’t end up with Osram like issues now…

do you guys have any GE links in ST

Yup, I have 2 Daylights that have had zero problems since day 1, and 9 soft whites. The soft whites use to have problems, but I can honestly say I haven’t seen an issue with these for some time. We use Minimotes and Alexa for those bulbs, and nobody in my family has complained about bulbs not working. Knock on wood…

Seriously, I went from crap to great almost immediately after removing the Osram bulbs. I worked with ST’s zigbee guru, and we spent many hours on phone calls and a conference call diagnosing every element of my environment.

I’ve been asked by @vlad to raise tickets to help support push thus to be fixed. So think it’s worth others doing the same to help.
Personally I think 1 or 2 bulbs don’t cause much of an issue. However as you increase the number stability just becomes rubbish. I had over a dozen and was seriously close to my wits end with smartthings and was thinking about leaving.

Personally I think 1 or 2 bulbs don’t cause much of an issue.

I only had 2 Osram bulbs, and both were less than 20 feet from the hub. As soon as I removed them from ST my problems with many other zigbee devices crawled to a stop in less than a day.

Yes that’s probably the worst location for them. One hop away from the hub. Possibly a lot of devices using them as the last hop before hitting the hub

So… there are definitely routing issues with the OSRAM bulbs, and we have new firmware from OSRAM that addresses this. However, ZigBee OTA firmware updates are still in the works and I don’t have a timeline for that feature. The firmware update we have doesn’t address all of the routing issues, but it should help. We continue to work closely with OSRAM to chase down the remaining bugs, but I just wanted to let you guys know that we are aware of this issue and we understand how important it is.

Probably sound like a broken record, here, but we’re working on fixing it.

Thanks @csuk, that’s what I was also told by another person. I have an Osram hub that I can use to update the firmware, so is the firmware you have the same one Osram just released through their hub?

Looks like both WiFi and Zigbee received a firmware update today for the gateway. WiFi- Old: 1.1.2.107 New: 1.1.3.22 Zigbee- Old: 1.2.0.67 New: 1.2.0.68 Has anyone found out where the new outdoor flex strips and motion sensors are being sold? I saw they were mentioned in the latest app update and newsletter but can’t seem to find them online lol.

I can’t say for sure if the OTA update from the LIGHTIFY bridge is the exact same one that we have, so I’ll attempt to summon @tpmanley to verify

It would be interesting to see if your test devices have the same latest updates from Lightify as we do. I believe all the lights are on firmware 01020492 in the US.

I dont know if i’d call this directly tied to Osram. Unless somehow all my devices meshed to some very far out Osram devices. I was/am primarily Cree’s and had the same instability with controlling the bulbs. And there’s at least 1 other that had the same issue mostly Cree’s.

As for my Osram devices, they were all purchased from Amazon and never updated, so as they came out of the box. I dont have a lightify gateway to even do the updates.

So… there are definitely routing issues with the OSRAM bulbs, and we have new firmware from OSRAM that addresses this

It’s taken months of pain and investigation including support time to come to this conclusion. I think smartthings should actively discourage customers connecting osram bulbs directly until this is fixed. It seriously ruins the stability of zigbee devices as you increase the number of devices to the point that you want to rip out the entire system due to the number of stuck sensors it causes.