how is it posible for zigbee devices to go offline
today 6 devices went offline one of which is a smartthings plug ,
i rebooted the hub but still offline i had to reset 3 devices and re add them (sonoff zigbee conatct button and pir ) the smartthings plug i had toturn off and back on .
ive had the odd contact sensor go offline before ,things that show as 100% battery when completely flat
just dont understand how
now i do 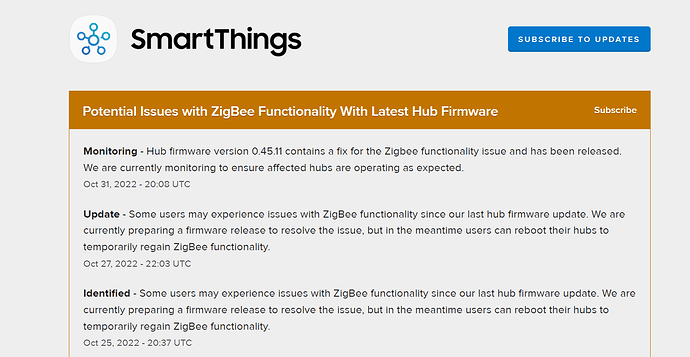 should have looked there first before pulling my hair out lol

If I understand your question, Zigbee devices can be marked off-line for any of the following reasons:

The status page messages you referenced apply to .8 above. But you could still have one of the other problems also. It’s just that those are going to be very hard to research if there’s a .8 problem happening as well.

Certain devices, and the Sonoff Contact sensor is one of them (the IKEA Motion Sensor is another), may be reported offline because the Edge driver is unable to determine that there has been activity within a certain period. It might be incorrectly expecting particular activity to occur with a certain period, and/or it may be incorrectly expecting the device to be able to report status on demand to show it is still active. As soon as contact (or motion) is detected the devices are shown online again. So offline can be misleading.

I have no ZigBee problems thruout all these firmware updates.

Perhaps theres a common routing device that’s causing the issues that others are having. Maybe post your list of ZigBee devices to help narrow it down?

On V2 hubs, running 45.11 (although no problems throughout all these updates) . ZigBee channel 15 in the US.

hi the devices in red are the worst ones 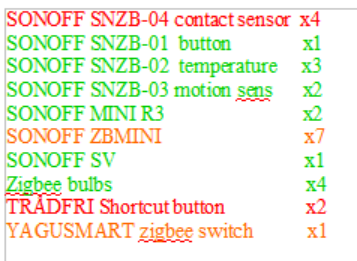 cheers for the info all
i didnt know about Routing devices will have to read up on that .
thanks
martin

I seriously considered to change to Home Assistant when I returned from vacation only to find out I had to reset every single Zigbee component connected directly to SmartThings. Probably due to this firmware “update”. We are talking about 50 sensors, buttons and lights. Fortunantly all lights and buttons on Hue, as well as Z-Wave sensor were still operational.

more zigbee devices offline again , funny thing is rebooting the hub makes no difference have to re pair them .