Can whoever writes a code potentially access your device?

No, that would undermine the whole platform. The DTH code installed can only be viewed by you (and the ST staff) and control of devices is limited to your account (and those you invite to share your account).

It may be worth reading through the FAQ’s and Wiki’s on how custom Device Handlers and SmartApps work in the SmartThings environment.

A place for collaborative wiki posts.

General FAQs for Devices and SmartApps

The purpose of local processing is to reduce the timelag/latency and also help device control during internet outages. There’s a push from end users for ST to extend this functionality to custom apps and handlers as well (which I believe they are looking into but they haven’t given an ETA yet). The underlying security model is the same whether it’s a cloud DTH or a local DTH, it’s just a matter of where it executes (and the same goes for apps)

I’ve had my conexis for a few weeks. Working really well but I had a panic the other day when I noticed it was unlocking itself throughout the night! (Looking at the activity feed)

However after reading your point… I hope it’s the same with mine. Its the status is changing to unlocked but hopefully the lock isn’t unlocking. I am yet to test this.

Any update on this particular issue though?

Check the actual battery level on the device. Mine did that when the battery was low. You can press the circular arrow icon in the app to refresh the status.

Its brand new, the battery is showing 88%.

It doesn’t actually unlock the lcok which is a relief but still a concern, incase it does unlock it self!

I see you guys talking about refreshing and updating the battery information. I don’t seem to be able to see anywhere in either the SmartThings app or the Yale app to refresh it, and it doesn’t ever seem to update in either.

My Yale app just seems to have a full battery icon (should there be a number alongside it)? And the ST app says 40% - but hasn’t changed in the first week.

Am I being dumb? Any help will be appreciated!

I’m very worried it’s just going to die and not give me any warning!

Tap the refresh tile a couple of times. It should force the lock to report the battery information to ST. If it’s less than 40% and you have a deadbolt lock I would replace it. The link describes why battery % drop drastically for deadbolt motors and can cause the lock to shutdown without warning.

Sorry, I might be being dumb, but how do I tap the refresh tile?

Interesting - thanks for the read. I don’t have a deadbolt lock. Instead I have the Yale Conexis - which is multi point. Any advice for the battery on that?

Yale seem to recommend alkaline batteries only- and am currently using the batteries which came with the lock.

The button being referred to for refresh is the one i’ve circled in red in the following screenshot: 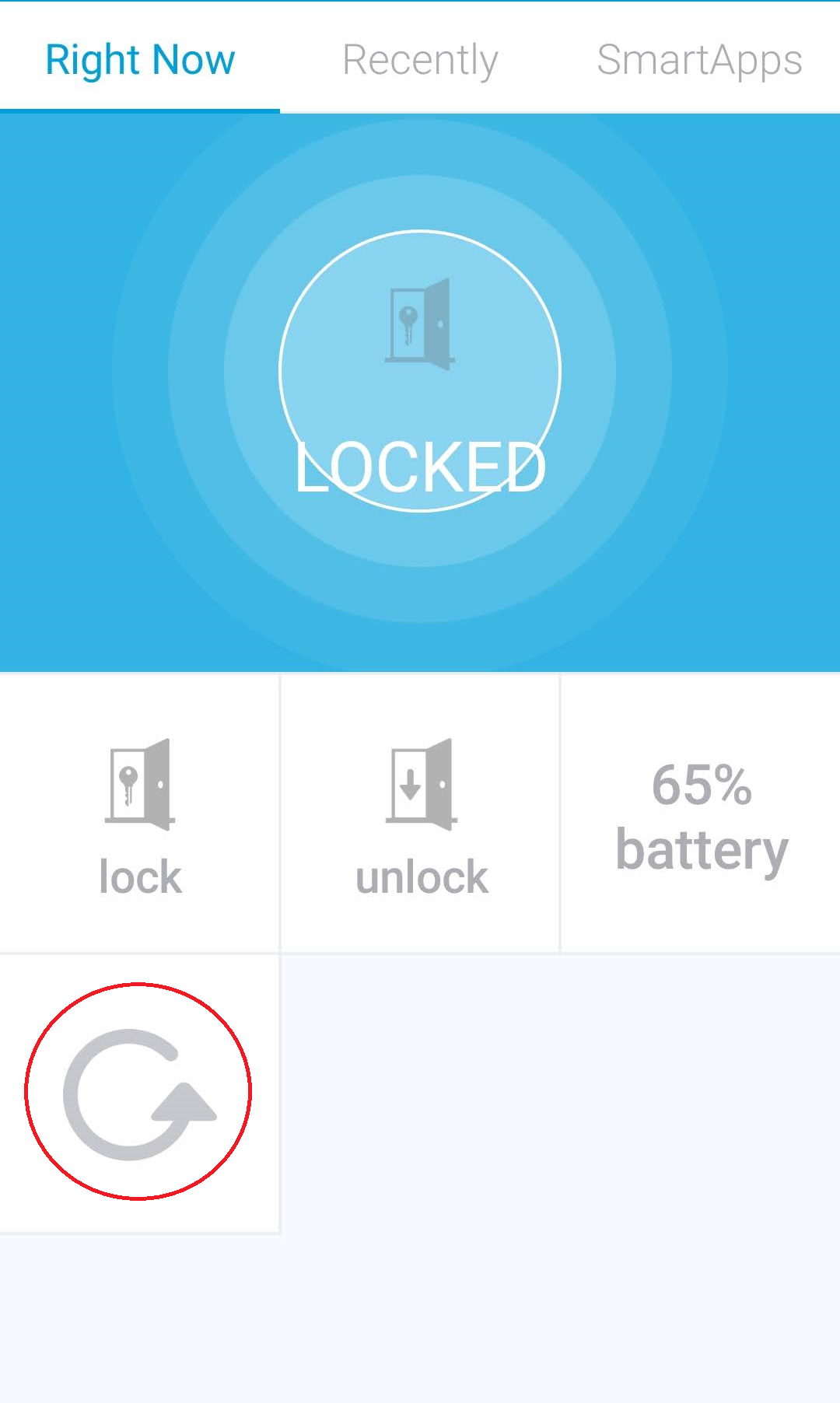 Okay - my app looks nothing like that! Is that SmartThings?? Ahh just googled it. Is that the ‘classic’ version?

Add me to the list of random erroneous unlocks, but only for one of the two L1s that I have.
I’m running the V2 module in both and got the firmware updated via the Yale module to try and solve the battery drain problem (going flat in under a week).
Interestingly the lock that used to go flat is the one that reports unlocks and doing a refresh can trigger it, so it seems to coincide with the health check polls from the Hub.
I’m running the local Zwave lock driver and have also tried the without codes version.

Same things occurring with my Conexis L1 lock. I’ve been experiencing ‘ghost unlocks’ for some time and have kinda got used to it doing that. It seems to happen just before the hour and I have no idea why.

Also, in the last couple of months my lock has decided that it wants to deplete fresh lithium batteries every three weeks whilst reporting 100% fully charged. Of course it likes to tell me it’s at 1% when the batteries no longer have the power to open the door.

Some folks have had better luck when they do a factory reset. M
Or you can ask Yale to see if they can send you a replacement zwave module.

It’s definitely worth phoning Yale support (they never respond online) to get the firmware update module, as my front door lock was eating Duracells in under a week. Having updated the firmware, they last much longer, but it hasn’t fixed the phantom unlocks, nor has a later Zwave 2 module 33.16 Vs 32.16.
It’s looking more like it’s one lock, as the back door is fine.
Phantom unlocks definitely coincide with polls as I tried the ZWave Lock without codes driver, which polls every hour and they match the polls exactly.
I’ve also done a complete factory reset, after updating the firmware.
It’s very annoying as I run routine on unlocks…

There is an issue with the Yale firmware for some locks with generates a DoorLockOperationReport before the AlarmReport (normally it should come after) which causes issues with missing information and some side effects by the way’s it’s currently handled.

What is your lock’s raw description ? (you can find this in the IDE -> My Devices -> Click on your lock -> Raw Description)

As I said, I’ve got two locks, but only the front door gets the phantom unlocks for a reason known only to SmartThings, as the hub is mounted centrally between them, although the front is shielded by being around the conservatory wall.

Both are running firmware 1.2 and were factory reset after being updated.

I tweeted Yale and after a bit of arm twisting they sent me a new module next day. Going to install it later tonight. Hoping things improve at least re: battery usage.

@RBoy Do we think the phantom unlocks and battery reporting can be improved or is this controlled by the device itself?

There are two models that exhibit this problem and this is one of them.

How did you turn off the DoorLockOperationReport?

Do we think the phantom unlocks and battery reporting can be improved or is this controlled by the device itself?

Let me see if I understand when this issue happens:

Is that sequence correct?

I’m not sure about others but I’m not sure my phantom unlocks are dependant on a previous code unlock. I have experienced repeated phantom door unlocks through the night…but luckily the door remains locked!

I mentioned this issue about a year ago - still facing it but less frequent. No idea why it’s less frequent though