What SmartThings app is this? Classic or the new 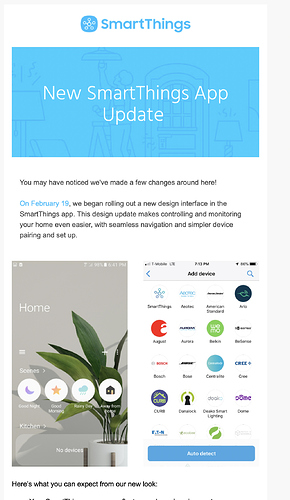 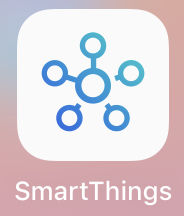 LOL, I can’t wait to hear your feedback Joel.

LOL, I can’t wait to hear your feedback Joel.

You’re not going to hear feedback as I am not installing it until I know everything will work.

You’re not going to hear feedback as I am not installing it until I know everything will work.

LMAO, oh come on! Trust me, I completely understand.

@joelw135 funny, I was wondering the exact same thing.

Everyone has said to date if you have third party Apps and DHs to use the classic app with this update is third party / community apps and dhs now supported?

That is exactly why I hate emails of this sort. Most people will blindly install it.

with this update is third party / community apps and dhs now supported?

Nope, not yet. Developers still need to work on their DTH’s to get them to work in the new app.

@johnconstantelo thanks, so I’m in @joelw135 boat, no point installing this.

Got the same email, not touching it

Detailed discussion by those who have installed the update:

Maybe it would be good to start a new thread specifically for this major UI update to the Smartthings app, people inc devs can see clearly peoples thoughts oh dear The new UI version should not keep asking me to add devices to rooms, i have many devices that serve multiple options and do not require rooms, it would be a major screw up if the devices that have no room assigned were added to a room and then that room was switched on or off, or at least give us a room with a name that relates to devices that are not specific… perhaps safe room or unassigned room [Screenshot_20190217-162410_SmartThings] [Screenshot_20190217-162155_SmartThings]

I have both the Classic and the New app installed. Up until this update they both seemed to work; after the update the New app on iOS doesn’t do anything but spin like it’s attempting to connect but never does.

That seems to have resolved it. Good idea. (Now I just need to figure out why it seems to think I have Samsung Soundbar MS650…)

Your neighbor probably has one!

Yup! My neighbors tv pops up all the time. Luckily they require a code displayed on the screen to actually pair.

I installed the new new app on my wife’s phone last night. She was able to login but nothing loaded. Had to invite her from the my new new app and now all is well. Started migrating some webCoRE pistons ove lr to the custom automation creator, too. Sometimes takes many rules to convert one piston, but figured this would be a good excercise

I contact support for action tile and he told me that both App works at thesame time not problem , and new app doesn’t support scene like SmartThing classic app do