I just got an update to version 1.7.57.23 on my Android device saying that they fixed some inconveniences. Can find any changes though. Has anyone found anything different ?

There’s something funny about this version. I got on my phone but not on my wife’s phone. And google play still says previous version 1.7.56.21 is the latest.

I will check after Xmas, my updates seem to arrive days later than most

Like the last update, very little visible, US got the labs thing but nobody else i don’t think

Maybe the update was intended for them Mike

Did it remove the 200 device limit?

Did it remove the 200 device limit?

No…and now the message is screwed up. 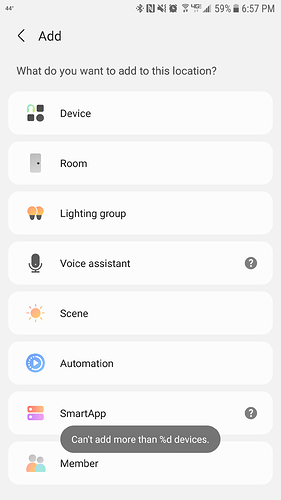 No…and now the message is screwed up.

Just unreal. It’s obvious the app/UI team is working in a vacuum.

It was suggested by ST that the app may get a decent update in early November now Classic has been kicked to the curb. Still waiting … I’ve pretty much given up hope.

And sorry, but the QA team needs a major overhaul.

Just unreal. It’s obvious the app/UI team is working in a vacuum.

Seriously. You would think adding a device limit to the onboarding flow would have been widely communicated top to bottom to every manager with SmartThings responsibilities. Yet here we are.

Even within the app team themselves there is no cohesiveness. Every section of the app seems to use a different way of displaying a list of devices. Things like this really highlight the polish differences between an Apple designed app and a Samsung one.

The loss of this feature means I have largely lost control of automations now, so many in different places coupled with a terrible UI naming display and the use of Alexa automations, if something breaks or need changing, finding the associated routine is now almost a lost cause

I will never change my opinion
I like ST, I like what it offers, it is widely used in my house for lighting and non essential security lighting, I appreciate all the work the ST people do - THE APP STINKS - it is total rubbish and cannot hold a candle to the usefullness and flow of classic
0☆

Another app update… And still no fix for Android 11.

What is the issue with Android 11?

Those using Android 11 are unable to download device addons (controller updates) within the app. An ongoing issue since Pixel owners first received the 11 update months ago.

So that’s why ever since i got the update to android 11 some of my devices take 6-7 seconds to load?

Possibly Andreas but I have not received the update yet and I am now suffering long load times on devices, not sure when the extended load time started … maybe 3 days ago perhaps more but currently if I open the app, devices take an eternity to settle into a stable on off condition

So it is not directly related to Android 11. What on earth is going on?? I made a video of the issue and uploaded it to reddit. I got a good deal of response there with many having the same problem and send logs to smartthings. Lets hope it will be resolved soon