It looks like the new plugin version of Smart Lighting has arrived. 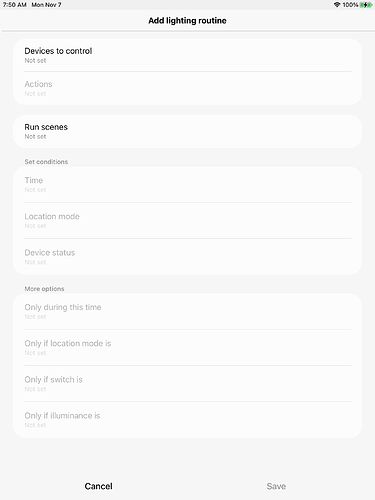 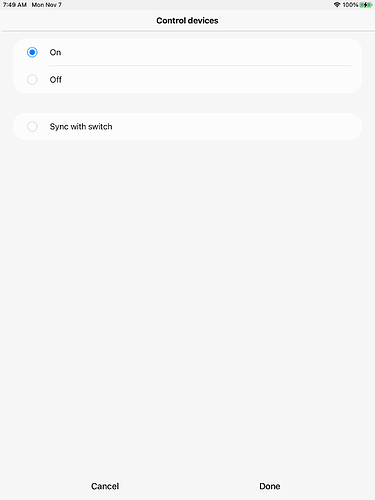 To answer some of your questions & provide context: We removed the Groovy version of SmartLighting from the “Discover” automations tab & replaced it with the Plugin version. Users with the Groovy version of SmartLighting already installed can still interact with it by selecting it in the “Automations” tab. This means that users who already had the Groovy version installed may continue to use it but those that haven’t will only have access to the Plugin version. We will be performing an automatic migration in the future - having both versions installed at that time will not cause any problems. If you want to try the new version now or would prefer to migrate your automations yourself you can do so. Prior to Groovy SmartApp support officially ending, any remaining Groovy SmartLighti…

Did you have to force it to update the existing one? Did you check if the mirror option now mirrors colors?

Where did you find that, or did you already have Smart Lighting installed?

I would imagine they will migrate on their schedule. I was doing a new install today of Smart Lighting when I noticed the small screen about downloading the add-on. I should have captured that screen but I didn’t.

I deleted my Smartlighting App but now can’t add it back.

It’s not even showing as an option for me in the Life section of the app, or any other section.

Where did you see it?

Add Routine, tap the Discover tab and scroll down to install it.

It does not show up as a tile in Automations until you create your first Smart Lighting Rule which you have to do when installing it.

I like the change they made for the Sunrise/Sunset, now have a spinner type dialog for setting the before/after period.

I have the legacy Smart Lighting installed. On iOS, I was able to tap the ‘new’ Smart Lighting and it requested you download the new feature. Then when I tried Android, it just went right into the new Smart Lighting setup.

Update:
I moved one legacy Smart Lighting routine over to the new Smart Lighting, and it was just as fast as before. The only thing I don’t like in the new GUI is I had to go all the way back into the device status to see the ‘turn off after’ setting. That’s a bit odd…

Im not seeing the little house with the checkbox in it to indicate local execution.

I’m assuming these will be local execution.

I unplugged my Hub from the network and confirmed local execution on the one new Smart Lighting routine I created.

I too have started migrating groovy smart lighting to this new plug in this morning.

Nice. I set up the new Smart Lighting and replicated a simple routine.

Hope I haven’t messed up automatic migration by diving into this.

I will say that the new Smart Lighting GUI is MUCH faster than the Groovy GUI, except for the ‘turn off after’ setting.

Nice. I set up the new Smart Lighting and replicated a simple routine.

Hope I haven’t messed up automatic migration by diving into this.

I open the Groovey routine and tap the triple-dot menu to delete it.

Wow! Somehow I missed that! Thanks!

On a Smartbulb, the color temperature setting was just a slider and I couldn’t set the number manually. Also, the color is WOW. It does both Swatches and Spectrum using Hex codes, and Spectrum had a Saturation slider. 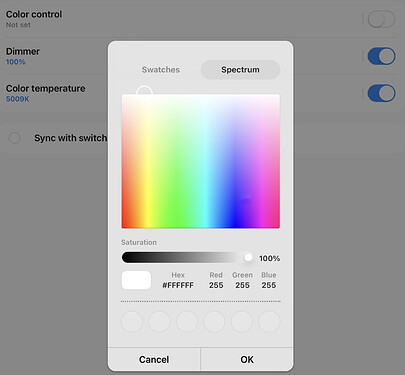 I noticed that children devices are now available. Example the channels 1-5 of a Zooz zen20 can now be accessed. Before it was just the main on/off