I’m new to SmartThings and have looked for an answer to this but cannot find one. The issue I have is that my partner works late. I go to bed and the smart home monitor is set to armed (home). She comes home in the early hours and I need the presence sensor to turn off the monitor so as to not wake me but then rearm when she closes the front door.

Any suggestions on the logic I would need to set up to make this work?

Are you using the presence keyfob, or mobile phone presence?

She could disarm the system from the phone app or through action tiles on her phone.
If she is coming into a garage, you could have a keypad in the garage to type in a code. There are a ton of different ways you could solve this problem. Or are you looking for the reason presence didn’t disarm SHM?

Any suggestions on the logic I would need to set up to make this work?

Working out the logic between all your presence based Routines and mapping out the different SHM states and modes ahead of time will help.

If someone is already Home, meaning that SHM is Armed / Home and the Mode is Night or Home, then I wouldn’t allow your I’m Back Routine to run when Mode is Home or Night.

Instead, I would create another Routine that when Mode is already Home or Night, and someone arrives, only a portion of what the I’m Back routine does gets executed, such as opening a garage door or unlocking a lock and turning on a light maybe. I wouldn’t disarm the alarm.

By incorporating different Routines based on already existing Modes that are set will give you better control when there are multiple people in a household and people are coming or going.

@DrLindsay
After having owned Smartthings going on three years, I would never rely on Smartthings to Arm/Disarm my system based on smart phones. Most of the time I have from a 2 minute to 30 minute delay when Smartthings sends me notifications that someone or everyone has arrived. Often my wife’s phone will show present all day when she has her phone at work.
A Smartthings key fob might be more reliable, although several people are using the free app, Life 360, and claim it is much more reliable.
When I drive into my driveway, I use the Good Morning Routine which I have set up to set the Mode to Home.
When I am ready to go to sleep I press on the Good Night Routine to arm my entrance doors and my outdoor cameras.
PITA to push manually push the buttons to run the Routines, but at least I know that they ran.

+1 using routine with a motion detector that would arm the alarm at certain time:

First your partner arrives at x hour which then causes the im back routine to disarm the alarm.

Create a ‘Partner is back’ custom routine that when your partner reaches second floor motion or halfway motion sensor (something is happening) at time window 2am-3am rearm Security for stay/home/night.

Mobile phone. Some say it’s unreliable but, in brief testing so far, it seems to be working perfectly for me

The rearm between certain times on motion is throwing me. Can see after sunset or at specific time but not a time range.

Maybe Presence Central would work for you.
It will change modes/run routines etc. depending upon presence with time restrictions built in.

Presence Central I created this SmartApp for my own use but thought I’d share it in case anyone else finds it useful. I have been testing it for a while and it seems to work fairly consistently. The reason I wrote this is because I had lots of separate apps controlling different presence actions. I just wanted to bring everything together in on Parent/Child app First of all I have to credit Brian Gudauskas (@bridaus -Reliable Presence) & Eric Roberts (@baldeagle072 - Everyone’s Presence) for stealing some of their code for multiple presence sensor determinations. Without their great work this app would not have been possible to create. This is a Parent/Child app to control presence sensor actions. Once installed you can setup any number of ‘child’ apps. You need to install & publis… 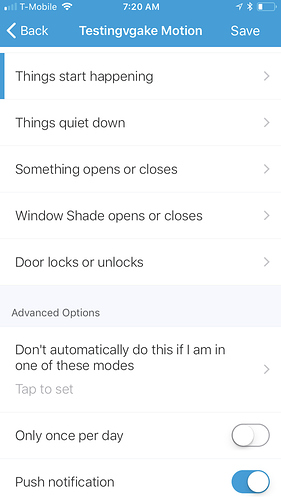 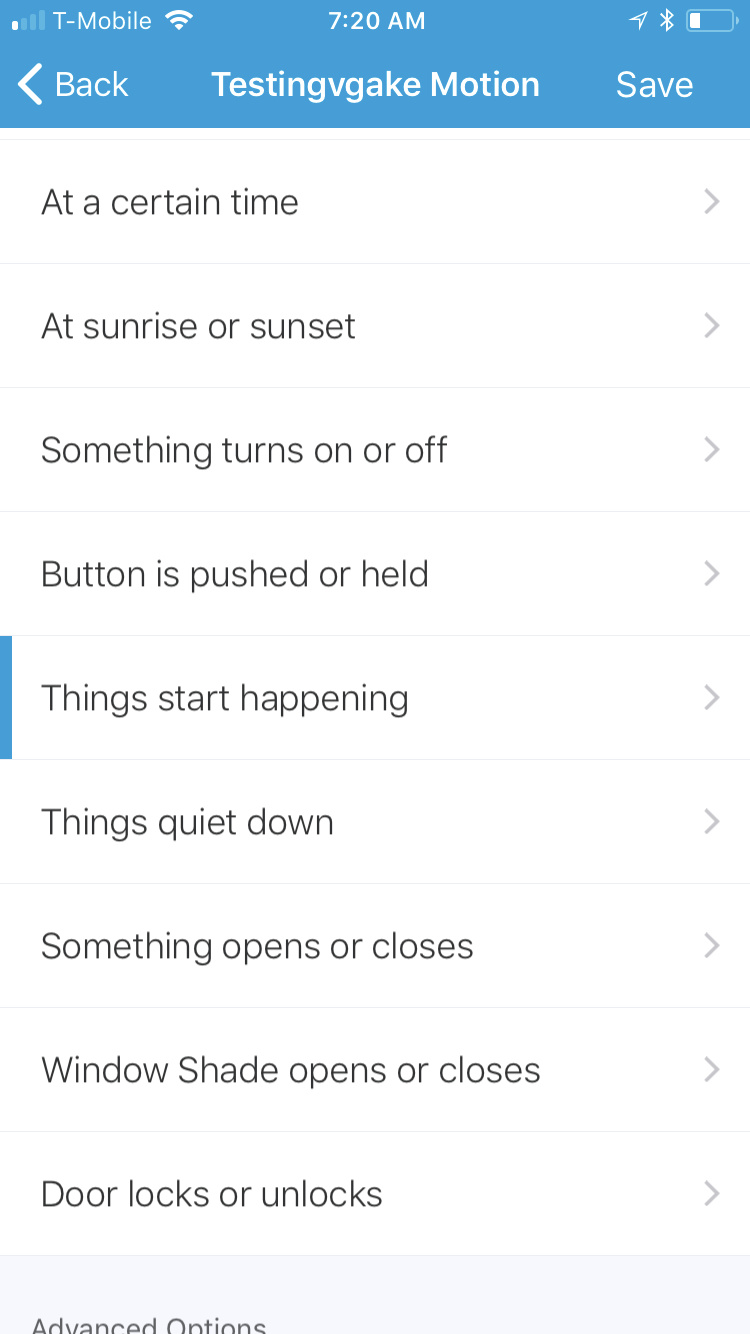 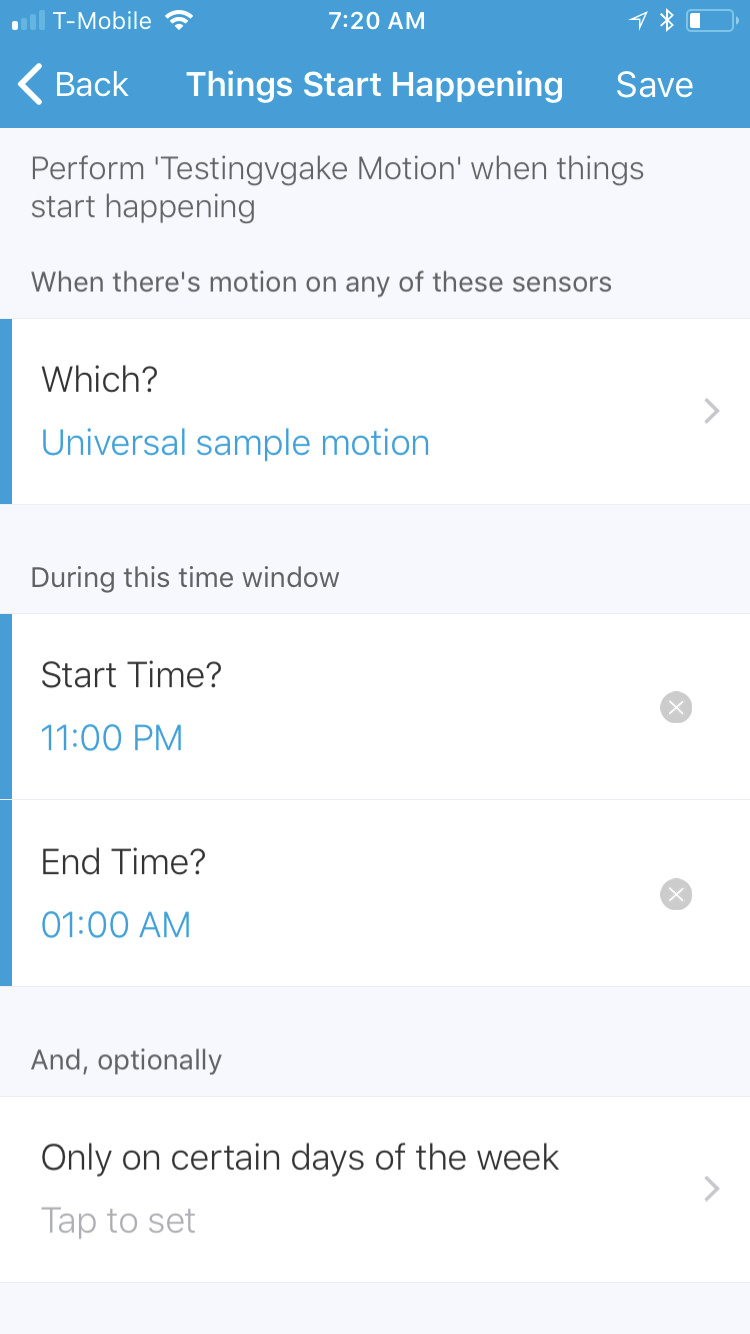 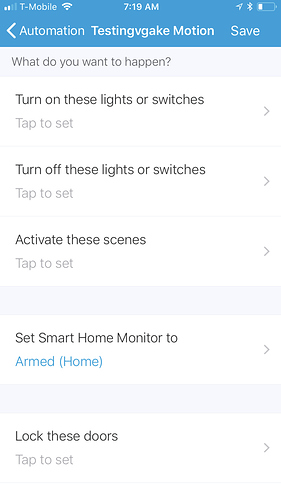 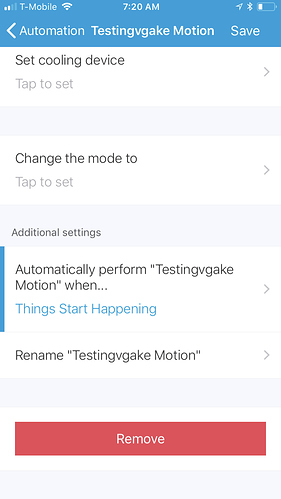 Time option is there after clicking ‘Things start happening’

The virtual switch option seems to be doing the trick on paper. This when used with Stringify should work fine. I have a stringify flow to turn on the porch light already so added it to that. The fact that the light is on should indicate the home monitor is disarmed. Then after a timer the lights go off and rearm the system. Perfect (hopefully)

This is pretty easy using webCoRE. It’s great at complex Ifs and way more easy to write rules than what you are trying to use.

If presence changes to present
And
SHM is Armed
Then
Disarm

Use webCoRE and all of your rule needs will be met.

@rontalley Can you show a screen shot of webcore that has
If SHM was Disarmed in the last 5 minutes.

Im trying to use in the last 30 mins for a motion sensor.

I see that the “was” condition is not available but you can create a Simulate Switch to follow the Arm/Disarmed status of SHM and use that. Just create a Simulated Switch in the IDE and import the Piston below using the code. 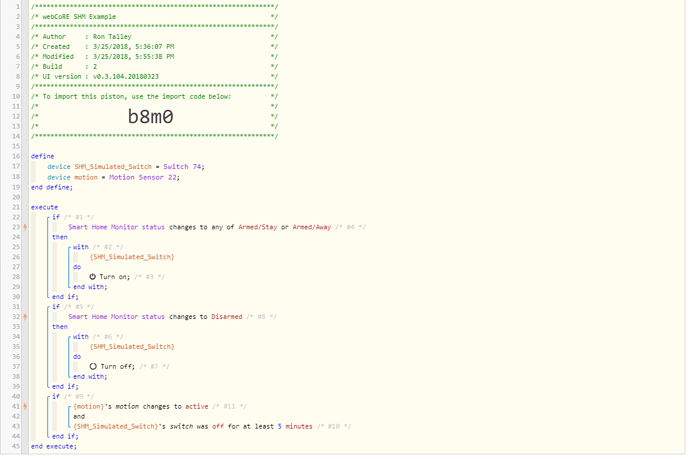 Notice that each argument has a trigger and you can only have 1 trigger per argument at time.

It was put there for the original intent of the request.

Right now it does not have a then…

Then whatever you chose…

I did something like this when my daughter would come home late.

Or something like that. I haven’t used it in some time now since she is off at college now.

So it can be done. Like mentioned above you just have to find the reliable triggers and conditions that will work for you.