Several sensors unavailable, yet no notifications of this, and system says "everything is ok"

I set up my system successfully months ago. today i had a water leak and the system never notified me. i opened the app and it says the device and several others (but not all) is “unavailable”. And the dashboard says “Everything OK”. I had no idea my house was unprotected. How could everything be “OK” if several of my sensors are unavailable? there is no data about when the sensors wer last available. i have received no notifications that several sensors were unavailable. i’m very technical and competent with technology and i can’t believe that the app has not been regularly sending me a notification that sensors are unavailable. This is the nightmare scenario: you think you’re protected, but you aren’t. i expect a system like this to “just work” without me having to open the app every day to make sure all my sensors are available.

I cannot find any documentation on how to make an unavailable sensor available again without wiping out the current sensor configurations. i do not want to delete the current configuration because it took time to set up, there is no good reason why it should be removed, and i don’t want to lose any history of what happened.

Can anyone assist me? I have the most recent water sensor model.

Try turning device health off. This device health caused plenty of pain for a number of people including myself. Possible because of the device unavailable that was why it did not reported in SHM. 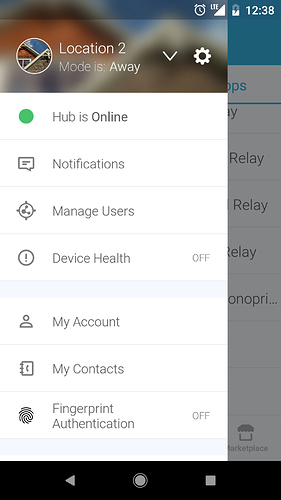 If the device is actually offline, turning off device health won’t impact anything.

Also try turning on insecure rejoin in your zigbee utilities. Is this a new sensor or an old one that recently started acting up?

Why would it be the batteries? I mean, i would have received battery low warnings, correct?

Brad_ST: I pressed the white button, and the LED illuminated greenish/yellow.

What’s the next step?

I turned off Device Health. Now all the sensors show “Dry” instead of “Unavailable”. I took one sensor and placed it on a wet paper towel, and I get no change in anything,

Sounds like a mesh issue. How far from the hub or nearest zigbee repeater?

Base is one floor above me.

I removed a battery and nothing changes, still shows “100% battery” and “Dry”.

Can you remove the battery, bring the sensor close to the hub, and then re-insert the battery? That would help rule out being too far from the Hub.

I replaced the battery while standing next to hub. the led flashed three times. i applied moisture, and the alert worked.

But now I can’t trust the sensors because earlier it was not alerting on moisture, but the app told me it was dry and was at 70 degrees.

Why would the app tell me that everything is ok, and that a sensor is at a certain temp, and is dry, if the sensor won’t alert on moisture?

I thought the app told you it was unavailable?

The sensor had lost communication with the Hub and was simply reporting the last known state which was dry and 70 degrees.

You may need to add a repeater if you find that once you move the sensor away from the hub that it isn’t reporting again.

Why would the app tell me that everything is ok, and that a sensor is at a certain temp, and is dry, if the sensor won’t alert on moisture?

If it lost communication with the hub it can’t tell you anything other than what the last status was at the moment it lost touch.

Sounds like you have a zigbee mesh issue and need to add some repeaters.

Edit: darn it, @Brad_ST beat me to it

Ok but why wouldn’t there be a timestamp displayed on every communication? That way if it says “70 degrees as of Nov 11” then I know there’s a problem.

I don’t think anyone has attempted to the answer my original questions:

What type of relay or range extender does SmartThings support? Is there only one option and if not can anyone recommend a particular brand?

Eventually I got my system working, but I had to restart the hub (at least I recall that made a difference) and I had to remove, wait, and replace the battery in every sensor but the one closest to the hub.