Can you introduct Rechargeable battery CR2450. 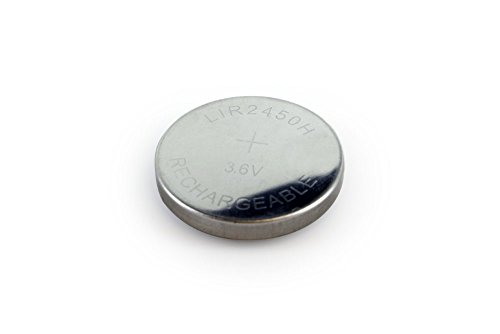 What application will it be used for?

I’d assume the ST motion and contact sensors. The rechargeable have like 1/3 the capacity around 150-200mAh I think, of the CR2450’s at 650mAh, so that’s a non starter in my opinion right there.

Bulk purchases of CR2450’s are cheap at around a buck a pop:

Depending on application and location they are rather simple to hardwire, thats why I was curious.

Rechargeable ones, even duracells new 372mAh 3.7v Li-Ion, won’t provide consistant, reliable results and will most likely result in frequent disconnects. Rechargeable batteries this size are meant for things like small flashlights.

Any advice… I’ve hardwired two AA batteries, which is 3 volts, into a Fibaro Door Window sensor that normally has a 3.6 volt 14250 battery, the sensor works fine, but the new AA batteries registered only 84%, I guess because it’s lower voltage.
It’s now down to 82% after 3 days use outside, should I of used different batteries??

Those are LiSOCl2 which have a high energy density that you won’t match easily, just curious why did you switch?

I switched because the regular half size AA, the 14250 only lasted about 7 months on my garden gate, so I was hoping two AA batteries would last much longer, is this correct?
I’m trying to minimise the amount of fiddling all this home automation requires.

That battery should last a while, it is specifically designed for that type if application. Probably has one the highest nominal voltages available on market and it sustains it for as long as 15 years. The chemistry of the battery it what you should look at if going to swap it with something else (obviously volts too) because that’s basically what determines mAh and operating temperature. This particular battery can operate from -76°F -185°F , the AA you put in will rapidly fade out the colder it gets.

Really, that’s interesting, so changing to a 3xAAA battery pack wouldn’t suit it better?
I’ve already noticed a 3% drop for the 2 AA batteries, they don’t look like they’d last the winter, shame.
Is there any way to hack, enlarge these small 14250 batteries?

I guess I got carried away with my success with modifying the SmartThings Arrival Sensor in the car, that has 2 AA batteries now instead of the coin one and it’s 100% after two months.

I would pick up a saft ls14250. If you want to make last longer add a second one in parallel.

As for your AA did you do those in series? To get same life you would need 4 sets of 3 in series in parallel of high quality LiIon

Put three of those in series (1.2v so total of 3.6!) and you should get much longer life, about 3-4 times. BUT temp will play a big role. My Eneloop’s are more resistant to the cold than Alkaline but the LiIon’s in my garage sensors are better than either Alkaline or NiMh.

Edit: I use Eneloop on my front door lock, 4xAA, they last about twice as long per charge as 4 fresh Rayovac or Duracell Alki’s. JUST due to temperature stability.

Or go to Saft’s website and get their LiSOCl2 batteries and they will last 3+ years at $1.98 a piece

Never heard of these guys, their site is less than friendly. Got a link? All I see is data sheets and can’t find CR type cells even. Maybe need more coffee…

Edit, or do you mean AA type batteries? Like LS, LSH series?

I forgot , have to have a corporate acct to order. You can still get their batteries from sites like start.com, actually even if you went with Lithium-Thionyl chloride (Li-SOCl2) chemistry you would make out much better as they are made specifically for use in sensors

As a cross reference:

1/2AA is real close in size to CR2, but not sure if compatible. Anyone know?