Recently 3 of my SmartThings branded open/close sensors just stopped working. the Recently option in the app shows “healthy” but the temp is wrong. I pull the battery and wait a little bit put battery back in and the temp is updated, but the open/close sensor just shows closed even though it is open. The battery is 77% (or at least that is what is reported. It just gets frustrating when things work and then all of a sudden does not work and you have to spend over an hour trying to get things to work again.

I have seen the other faq about power off hub, pull batteries and wait, replace battery, etc… This type of process just makes the SmartThings hub only for “geeks” and not the average person. I could not even imagine helping my Dad use one of these in his home when things just stop working.

What exactly does it mean when you look at the Recently list showing Connection is healthy ?

Tonight I had a similar issue with several of my open/close not reporting properly as well like they were stuck. I was only down for a very short time because they came back to life after opening and closing the doors manually. This happened on about three of my sensors but everything seems to be OK now?

Got notification of door left open twice in the past six hours hours son on two separate doors. Open and close the door manually seems to reset. They hang/fail to report when closed after being opened briefly. Devices are SmartSense Open/Closed Sensor and SmartSense Multi. LQI and RSSI readings look good. Seems to be platform problems.

Also just noticed one of the open/close sensors does not appear in the list of devices for the location, but does appear in the My Devices list in IDE.

I had to pull the battery on each one several times before the open close started working again.

for the SS multisensors 1st generation (with CR123 battery), I have noticed as the battery decays, then open/close notifications become unreliable. But my battery was something like 33% or less, and the battery report itself was unstable, going to -13% (yes negative) and back to 1% and 33%. All these % are approximate from memory. New battery resolved the issues.

While the open/close were reporting for only about 2-5% of the actual occurrences, the temperature reports continued to work about 95% .

I wonder if this is related to my issue (https://community.smartthings.com/t/sudden-problems-with-smartsense-motion-sensors/45838). The motion function of some of my multi-sensors no longer register as working. I have pulled the (new) batteries a couple times, I will try some more when I can muster up the energy again (feeling discouraged).

Troubleshooting: Samsung SmartThings Multipurpose Sensor is stuck on "open" or...

If your Samsung SmartThings Multipurpose Sensor or SmartSense Multi is stuck in a particular state, there are a few options you can try to correct it: The multipurpose sensor may be out of range. ...

I took it off the door and grabbed a magnet and sat 3 inches in front of the base unit and could not get the open/close to trigger. I then pulled the battery a few times, changing the amount of time in between putting it back in and things came back to life. Then I put back on door and it continued to work.

There have been odd things going on with Zigbee stuff, and hopefully the recent firmware update will take care of past issues. I’ve had motion sensors, open/close sensors, humidity, and leak sensors all needing a reset regardless if they’re ST’s or Iris devices. It’s driving me nuts.

If you haven’t contacted support@smartthings.com - please do.

For me, removing and replacing the battery works, but the device craps out again in a couple days. Since the firmware update, I’ve done a harder reset, and so far so good:

do not remove the device from ST
if you can be really close to the hub, I would recommend it when doing the hard reset

Since you didn’t remove the device, you can now go and see your device in the app and it should be working. I would also check the event log for the device in the IDE. Pay attention to color of the each event log entry. If you see an entry with a grey background, the device sent an update but it didn’t update the app because there was no change since the last value the device sent:

In the example above, only the entry at 4:48pm would be shown in the app: 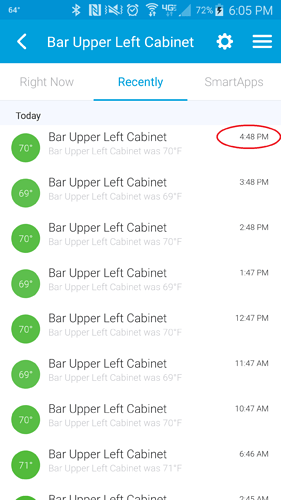 Thank you very much for that insightful info.

Thank you for the link. I was worried I was having battery issues, but they were reported at 66%. It turns out that the reporting stopped working the same day I enabled the 2.4 GHz radio in my wireless access point. Both devices reside on a shelf together. Turning the 2.4 GHz radio off on the access point resolved the issue. Good to know that I dont have to go around replacing/resetting batteries and/or removing the device and adding it back in again. Hope this helps someone else.

Hello. I have this sensor, and find that I have to be within about 20ft of the hub for this to work. This is very annoying. I have other devices nearby, but they are Z-Wave. Will they not help the signal? The battery is 100%. Is there any way to get it to “learn” its new location?

I have other devices nearby, but they are Z-Wave. Will they not help the signal?

Zigbee and Zwave are completely different, and do not route each other’s data. Since this post was created, a lot of improvements were recently implemented by ST for Zigbee, and my problems are completely gone - BUT, I also removed my Osram bulbs, which have been shown to cause issues. There’s a few other discussions on those bulbs you may want to search for and catch up on. Apparently there’s a firmware upgrade that should resolve the problems.

If you have a lot of 2.4 GHz noise in your home, or other interferences, I’d recommend a few Zigbee repeaters like the SmartThings or Iris Smart Plug. I one in each room, and it does make a difference.

Thank you. As I recently converted from Vera MIOS to ST, I’m 99% ZWave. I’ll add a couple of repeaters and see. Hope ZWave and Zigbee get along ok together. Thank you again.

Hope ZWave and Zigbee get along ok together. Thank you again.

Anytime, and welcome convert! Ask if you have any more questions, someone is always around to help.

I have 260+ devices, equally split between zwave and zigbee. They work very well together without issues. I can tell you from personal experience that repeaters are well worth the investment for the overall health of your mesh.

Thank you. I’m happy I drank the kool-aid…I’m much happier in the ST world once I learned the ropes in writing my own apps. I should have some ST Zigbee plug-in modules soon, I’ll plug them in strategically to extend the network.