I purchased the fallowing device: 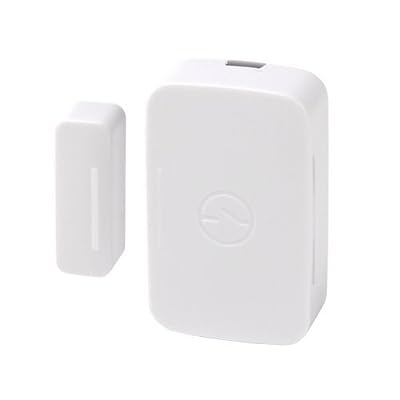 By placing this ZigBee sensor on a door or window, you can receive immediate alerts if things open or close unexpectedly. You can also place the sensor on a drawer, cabinet, safe, or jewelry box to mo ...

which says it’s from SmartThings. And did so based on the fact that even though it uses an odd battery, it’s rated to last 17k hours instead of 2k like the alternative open/close sensor from SmartThings.

So can anyone shed some light on this? I’m pretty new to using SmartThings, so I don’t know exactly how everything works. This is the device furthest from my router (and SmartThings Hub) do the “things” work like cell phones where if it has to work harder to get a signal it uses more battery power? If so I could set up another wireless access point by using a bridge and an old router set into AP mode. If not… has anyone else had an issue with this model?

I have two of these currently, they are within 20 feet of the hub and I have yet to need to replace the battery in them for over a year. I have noticed that it will drop to a certain percentage and stay there for some time. Not sure if the circuit they use to read the battery status is accurate. Right now after 1 year it says that it is at 63 percent.

Did you by any chance notice that it dropped quickly at first? so far it seems 10% a day. I’m hoping it stops but…

Yes indeed it did. But please realize your milage may vary, based on use and distance to the hub

This is definitely out of character for these sensors. I have a few and they are both hovering at 70% after a year. I’d drop a line past support (support@smartthings.com) and we can help you troubleshoot what they issue might be. I am thinking it might be a signal issue like you already mentioned.

I’m preparing an old WRT54G as a Wireless repeating Bridge that I will place in my garage, and note the power level tomorrow. If it doesn’t help I will open a support ticket. If it does I will make a note here in case anyone has a similar issue.

One question I did have is how the wireless works. Does the SmartThings hub broadcast its own signal? or does it just use the wireless signal already in place? If it broadcasts its own signal then a wireless repeater would really not help much, but I could move the hub to a more central location…

I was just gonna write something in response to you.

The WRT54G will not help you. Sorry:(

The sensor you are using is a ZigBee sensor so it uses the ZigBee Protocol establish communication.

You can use use a zigbee smartplug to extend the mesh though. Most non-battery powered devices will act as range extenders for the mesh.

Dang. Well I’m already needing to extend the wifi anyway, so I might as well keep it up on that. But I also have some wireless bridges (can’t wire my place, its an apartment) and place the hub in a far more central location and see how that works. Good to know that it’s actually using a different wireless range.

Several different issues here which overlap but still are independent.

One) network protocol. The sensors communicate via zigbee, not WiFi. So adding another Wi-Fi access points won’t help them in anyway. Well actually, it could make things worse because Zigbee and 2.4 Wi-Fi can interfere with each other. The stronger the 2.4 WiFi, the harder the zigbee has to work to get its own messages through. (5.0 WiFi doesn’t interfere with zigbee, so use that for preference.)

You can improve zigbee signal switch strength to the sensor by adding another Zigbee device closer to it so that messages can be relayed.

It’s possible that if the sensor is right at the edge of your network that it is having to repeat Messages multiple times, which would use additional battery life, but you would see this in reduced functionality as well.

The other is a multi sensor. It has an open close sensor, but also a 3 axis accelerometer. Much more complicated device, actually reporting on five or six more measured values. Consequently, however you look at it, it’s going to use more juice.

A lot of people don’t know this is one reason so many battery-powered sensors include a temperature reading. It’s so you can track the environmental conditions you’re exposing the batteries to. So take placement into account when evaluating battery performance as well.

There are some other factors that can be involved, but those are the first steps.

Consider the device (a multisensor is never going to have the same battery life as a simpler device). Strengthen each network (zigbee, zwave, wifi) independently. Then watch the trend, as well as the tiers. Dropping ten percent in a week might just mean you really dropped 0.5% and hit the next tier. It can even be due to temperature variation, pretty common with window sensors. Dropping 20% in two weeks, though, is at least a real drop of a full tier. And that would be significantly faster than it should be. So that’s when you start looking at range, battery quality, polling, temperature variation, even the possibility of a bad device.

This might help give you an idea on how everything works.

This post should be made into a FAQ. I found it really helpful and informative.

So I wanted to wait awhile to make sure I solved the issue. Two weeks after putting a wifi bridge (and hooking up the smartthings hub to it) in the center of the house. the battery has not dropped past the 77% it was at the night I hooked it up. Thank you everyone for all the help!

Just set up the smartthing hub last night and one of these switches that came from SmartThings. I noticed today that the battery life is at 88% too… Just searched and found this thread. I am going to assume that its an inaccurate reading and the battery should last a long time – right?

Mine was not inaccurate, it was draining incredibly fast because I had only the hub and the sensor was on the complete other side of my home.

Many of the devices that plug into the wall (not battery powered) function as repeaters and strengthen the signal, but I did not have any nor need any beyond the making the network stronger at this time, so I moved my Smartthings hub to a more central location, and the battery has been holding steady since.

Think of it like a cell phone, if it can’t get a good signal, its going to keep pumping more and more power into the antenna to try to improve it. Home that helps!

thanks for the reply

I have had my multipurpose sensor installed for 5 days, all are still at 100% but today I noticed one as at 88%. Its not the furthest away from the Hub either. Does the cold temperature effect the battery life. The one at 88% is on a window and it is very windy and cold today here.

Same with me. I installed the Hub and sensor on the garage door on Saturday and checked on Wednesday and was at 88%. I had also moved the Hub to the basement because of some remodeling, but now realize it is sitting next to a concrete wall in a location which is “harder” to reach from the garage and drains the sensor battery more.

This is normal due to the architecture of the sensors. @JDRoberts has posted an explanation on this:
http://thingsthataresmart.wiki/index.php?title=Battery_Reporting_in_SmartThings_(Tier_Reports)

Same here about the newer generation multi-sensors and battery life.
Had mine 5 months, on a seldom used door. Went from 100% to 77% in a few weeks then to DEAD and nothing tells ya it’s dead, the GUI just reports green and 77% but it stops sending events.

Normal house, hub nearly center, maybe 40 feet to sensor, but there’s a motion in between so the mesh should go through it.

Really wondering if this was a good idea.

The system not reporting a sensor is dying or dead is nutso.

My ancient GE system had supervised wireless switch contacts, & they reported in periodically and the system told you if batteries needed replacement or a sensor was dead.