I just setup a new SmartThings Hub V3 with 10 door sensors and 3 water sensors, less than 1 week ago.
All the new Samsung sensors.

My 3 water sensors all show 100% battery.
My door sensors are ranging from 78%-88%. Many of them being around the 80% mark.
A number of them are mounts on basement windows and have never been opened or closed but are down to 80%.

At this rate I’m going to be replacing my batteries every 2 months.

Any idea what’s causing the massive battery drain. I can’t imagine it’s normal to loose 20% of the battery in 5 days.

Is there anyway to turn off the temp, motion, ect setting on the multi sensor? I don’t need that I’m guessing it’s contributing to battery drain because looking at the log it’s updating the temp every time it changes 1 degree.

Don’t worry, that’s nothing to be concerned about.

It’ll probably stick on 88% for weeks and weeks now.

However DO NOT rely on the battey reporting - it’s broken and will state 50%(ish) and the devices will actually be dead.

Thanks for the quick reply Kraeg.

I have one sensor reading 89% and another one reading 88%.
Almost side by side on windows.
Doesn’t that mean it can go by 1% increments?

It depends on the device handler and firmware version, but no - very few go by 1% increments…and don’t get me started on battery reporting - just search these forums as it’s been reported for years and it’s never been fixed.

Not ideal for a battery based product

The one that is 88% and other that is 89% is the new Samsung MultiSensor. So they are both exactly the same firmware, ect.

“don’t get me started on battery reporting” hahaha that’s funny.
I did search the forums and also saw a LOT of complaints about battery reporting. I was hoping by now with V3 and the new sensors (ALL made by Samsung) just maybe there was some new information or a fix which is why I posted a new post… guess they’ve done nothing.

Thanks again for the quick reply. I wanted to make sure that a sensor isn’t going to drop offline and think a door is open in 4 weeks in the middle of the night and set off my alarm, oh the wife would love that…

Zigbee devices report battery as volts. Battery % is a totally meaningless arbitary calculation, assuming the author of the DTH knows the device’s minimum operating voltage vs the reported voltage. Some DTH’s use a table so a drop of .1 volts may show a 20% drop.

Yeah, I feel like all the responses are just dismissing the problem. Regardless of how the battery life is reported if they only last 2 months, that is a problem. I guess the better question is, is there a way to improve battery life for Smartthings devices? Closer to the hub, turning off unneeded features to conserve power, etc. any thoughts on that?

The OP was concerned atbthe reporting after 5 days thinking that at that rate, the batteries will dead in 2 months. This is probably unlikely.

The below sensor reads negative 22. Still working after a year. 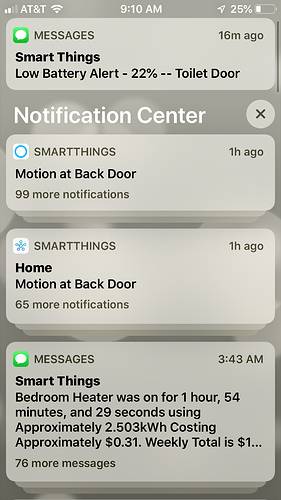 Have you ever received an answer as to why the battery life seems to die so quickly. I too just installed a number of multipurpose sensors and after a week they are reporting 92%. I agree that at this rate the sensor will die after a couple months.

It’s impossible to say, I have sensors which last 6-9 months as they’re not in a high traffic area. Others are replaced every few months.

Things like amounts of events, temperature, number of firmware updates etc all have an affect on battery life.

I’ve spent the past year slowly removing SmartThings devices and replacing them with different devices whixh have a better battery life in my oppionion.

Does proximity to a repeater affect battery life? I know that with cell phones, if it has a weak signal, it will eat through battery faster. Does zigbee boost tx power if it detects a weak signal?

I’ve had mine just over a year and I can confirm that I consistently have to replace the batteries in the open/closed and the motion multi-sensors every 6 to 8 weeks. It’s pretty ridiculous.

Just set up my system… 5 days in and 3 x motion sensors are still showing 100% ( in bedrooms so high traffic areas ) but the 1 multipurpose sensor I have set up is down to 89% and its back in the box…never actually used as open / close. Seems to be an issue with just these sensors…

Might be some old batteries. I’ve had mine installed like 4 months ago on garage doors and still show 90%.