I won’t be converting the Zooz RGBW Dimmer DTH into an Edge Driver, but most of the functionality should work with a built-in driver once the Groovy platform is retired.

This is a DTH for the Zooz RGBW Dimmer (ZEN31).
Features

The classic mobile app has tiles for white on/off and color on/off, but if you enable the “Create Child On/Off Switch for …” settings then you’ll be able to use the child devices to control the on/off state of white and color.

@krlaframboise can you recommend an RGBW strip that would work well for this? I’m having trouble identifying the entire chain of what I would need (Power Supply, Zooz controller, LED Strip, Connectors, etc.).

Hoping to use strips with warm white LED’s, but I’m having issues when it comes to the width of the PCB, waterproof vs. non-waterproof, connectors that are compatible, etc. Thanks for your help!

Hoping to use strips with warm white LED’s, but I’m having issues when it comes to the width of the PCB, waterproof vs. non-waterproof, connectors that are compatible, etc. Thanks for your help!

My response is going to be long because I spent several days researching that stuff so I probably won’t have time to post it until late tonight or tomorrow, but don’t waste time looking for an adapter.

I wasn’t able to find one that aligns with the RGBW controller terminals, but the 5 wires are usually exposed for a few inches at the end of the strip so you can just cutoff the connector and attach those wires directly to the RGBW controller.

can you recommend an RGBW strip that would work well for this? I’m having trouble identifying the entire chain of what I would need (Power Supply, Zooz controller, LED Strip, Connectors, etc.).

Hoping to use strips with warm white LED’s, but I’m having issues when it comes to the width of the PCB, waterproof vs. non-waterproof, connectors that are compatible, etc.

If you cut off the end of the strip, like I originally mentioned, you won’t be able to return it so you might be better off getting an extension cable you can plug into the strip and cut the end off of that instead.

The pin order doesn’t matter since you’ll be cutting off the end anyways.

I like IP65 because it puts a thick gel coating on it which probably adds some protection and makes them cooler to the touch.

The width only matters if you plan on using connectors to make a right angle or attach 2 together.

The tape backing of most strips doesn’t work well and if you plan on using clips you most likely won’t be able to find any clips for 12mm IP65.

Most strips list the power supply requirement. Most of the strips on Amazon are 12V and 5A or 6A.

You’ll need an adapter that has a female end the power supply plugs into and terminals on the other end you can attach wires to. Some power supplies come with the adapter.

There are a lot of RGBW strips available and most allow each color to be controlled separately which is really the only requirement.

I like the strips that have dedicated RGB and White LEDs instead of 2 in 1 LEDs because some of those say not to use white and color on full brightness at the same time and they seem to give off more heat.

If you want something really bright you might have to buy a high end strip at a specialty LED store because most of them on Amazon either don’t list the lumens or the values listed are really low.

There are some inexpensive kits that come with a remote and power supply so all you need is that adapter for it with the terminals.

The remote also allows you to test the color range and brightness before wiring it to the RGBW Dimmer, but you won’t be able to use the remote afterwards.

This one isn’t really bright, but I’ve tested it with the RGBW Dimmer. 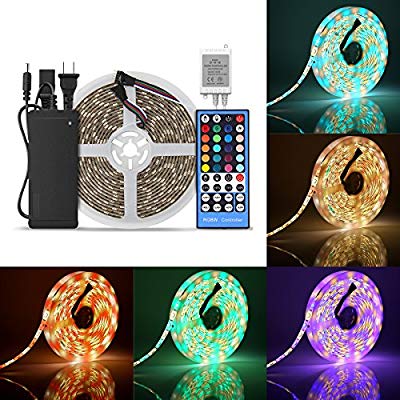 Can’t seem to get child devices to show up for individual channel control. I can get the ones for the cool color modes - rainbow and storm ect… but not the individual channels. I click on create then save and nothing. Says I need to install the child dth but I can’t find that anywhere to install it. Any help would be appreciated.

Says I need to install the child dth but I can’t find that anywhere to install it. Any help would be appreciated.

The Child Dimmer child handler was on GitHub with all my other handlers, but it looks like I forgot to include a link to it in the main post.

After installing the handler open the settings screen in either mobile app and save. I don’t think the new mobile app has a save button so you’ll have to change a setting, but it doesn’t matter which one you change.

Update: It looks like I didn’t update the description at all after re-writing the DTH so thanks for pointing that out. I don’t have time to update everything in the description right now, but I’ve added a message to the top that includes a link to the child.

Ah thank you . I had found that one actually, upon further inspection I had published it . I deleted it and re installed without publishing. Works great now. Thank you.

@krlaframboise do you know if the white in the rgbw strip should be cool white or warm white?

do you know if the white in the rgbw strip should be cool white or warm white?

The device controls the brightness of the white channel not the color temperature.

Setting R, G, and B to 100% will produce a cool white, but with the led strips I’ve tested it has a blue tint to it.

The device changes the brightness of each channel and that’s it, there is no “mixing”.

For the z-wave command, the device only supports the warm white color component, but that has no impact on the color it produces because that’up to the led strip.

All the LED Strips I’ve seen have either separate white LEDs or have LEDs that are split rgb and white, but I’ve never seen one where the rgb channels have any affect on the white channel.

The device changes the brightness of each channel and that’s it, there is no “mixing”.

If you set blue to a low % and the LED Strip supports Warm White then you’ll end up with dim blue LEDs and warm white LEDs on. 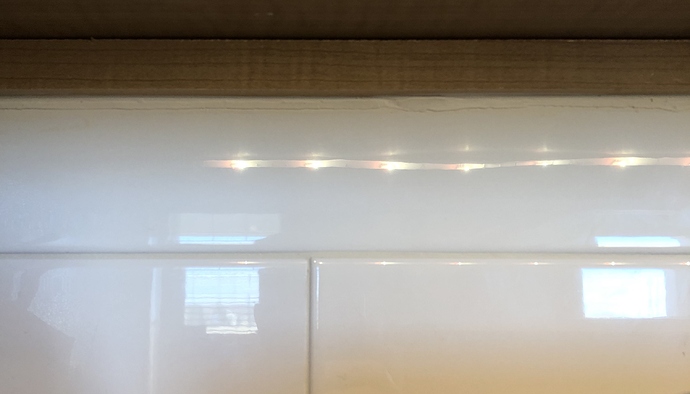 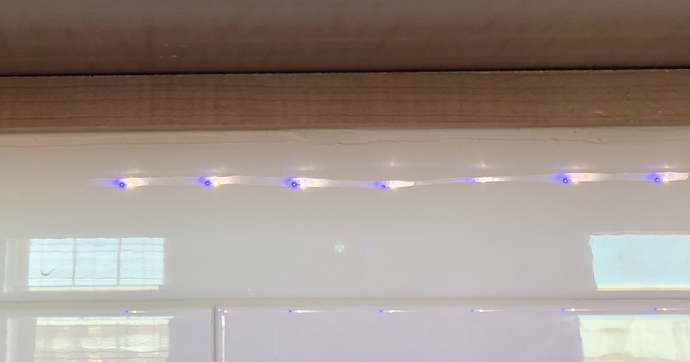 First off they’re zigbee which is far superior protocol for color control. Second it has a built-in controller so it knows all the specs of the LED strip it’s attached to and can manipulate it based on the commands it receives from the hub. Now I get why you kept thinking there was a smart/mixing aspect of the RGBW Dimmer…

The Zooz RGBW Dimmer is meant to be used with a dumb LED Strip, which you can often find for less than $20 on Amazon, and the color sends output to each channel and that color turns on. The RGBW Dimmer has no knowledge of what it’s attached to, it just sends electricity to each color wire.

Everything below still applies, but it probably isn’t necessary now that I realized you’re expectation of how it should work is based off something completely different, but since I already wrote it I’m going to leave it in the post.

That’s not changing the color temperature of the white LED and the only reason that partially works with your LED strip is because your LEDs appear to be split RGB and White which are practically touching each other. A lot of LED strips have dedicated White LEDs and RGB LEDs which alternate and have gaps between them so that wouldn’t work at all with those.

Except for those built-in automations, the Zooz RGBW Dimmer doesn’t do any calculations, it just allows you to explicitly set the 0-255 value of the warm white (0), red (1), green (2), and blue (3) color component ids.

For example, if a Smart App passes purple into the setColor command then the DTH has to convert purple into a 0-255 value for R, G, and B. It then sends a command to the device that sets color component ids 2, 3, and 4 to their corresponding values and the device uses those levels to change the RGB LED to purple.

Long story short, the white color depends entirely on led strip and the only time that might make a difference is when using the mode that has lighting because I think the lightening flashing is the only time the white channel is used in those modes.

I could simulate that behavior by including a setting for the white temperature of their LED Strip and then calculating the amount of red or blue to include based on their strips default color temperature and expected color temperature, but it wouldn’t work at all for dedicated RGB and White LEDs and it messes up the ability to use White and RGB together so you wouldn’t be able to display bright green and a specific color temperature at the same time.

Are the preset programs modifiable/expandable?

For instance, is there a way to make them preset programs dimmable? Or create a “breathing” or “heartbeat” effect? or custom flashing/strobe/lightening (like in the police/storm program) effect?

Are the preset programs modifiable/expandable?

No, they’re built into the device so you can’t create new ones…

Amazing handler! Albeit I find it a bit confusing to incorporate. I’m sure I’m missing something simple but can’t find any documentation.

I have a google home > smartthings setup. I don’t want to use the smartthings app to control the zen31, Google & the Handler are already smart enough to control basic commands on the zen 31 like:
“OK Google, make the TV LED Orange” or “set the TV LED brightness to 50%” but I can’t seem to get it to understand how to engage any presets like “OK Google, set the TV LED Dimmer to the Polar lights preset”

Do I have to do this somehow with virtual Child Devices? My apologies for the noob nature of the question, but it may help other noobs too…

Figured it out, yes, it was a Child Device Solution:

Figured it out, yes,

I’m glad you were able to figure it out.

Whether or not turning off the preset program should turn off the switch is debatable, but I opted to keep it consistent with the behavior of all the other child devices.

If you turn off the child device for red then it turns off the red channel, but leaves the device on so turning off the preset program doesn’t turn the device off.