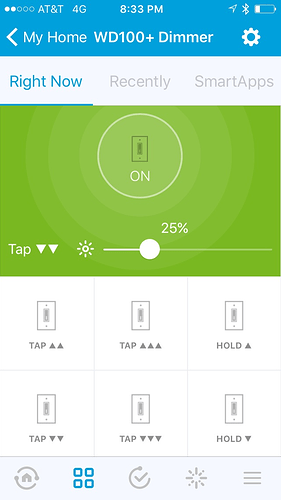 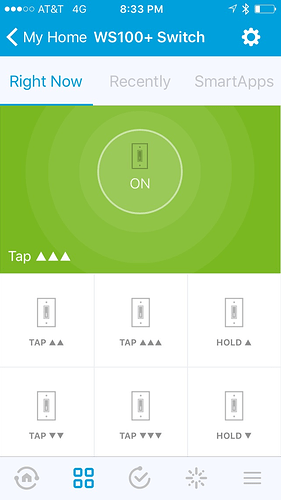 These device handlers provide support for the switch’s firmware capabilities for Central Scene notifications for double-tap, triple-tap, and hold functionality for both up and down presses, as well as instant status. The device handlers display the current switch firmware version and also include virtual buttons on the mobile app to allow triggering double and triple tap as well as hold actions.

The WD100+ dimmer device handler includes preference options for the device firmware capabilities to set local and remote ramp rates and to reverse the dimmer direction. There are also preference options to turn the light on full brightness following a double-tap or single-tap up action, as well an option to set the dim level to 25% after a double-tap down action.

The single, double, triple, and hold functions for each of the up/down cases are mapped to device buttons 1-8 (mapping here)

The links below will always have the most current version of the Device Handler - so there’s no need to skim through this thread to find the latest version:

Thanks everyone for the valuable input and feedback on these Device Handlers.

Congrats! I love this switch and love the work you did on this to bring it to SmartThings!

I would also put a link up to your review article so people can read about the actual hardware the device handler works with.

Awesome work @Darwin! Thanks for adding the additional buttons.

Not sure if this is the more active thread or not now.

I am wondering, if I only want the physical double and triple tap in certain locations in my house do I only require the homeseer switches where I want this functionality??

Can I use ge or some other less expensive switchs for in the other areas?? Can the homeseer switch include other brands of switches in their double and triple tap groupings?

Example: can I have a switch at the front door that if I triple tap it turns off all the z-Wave switches, plugs, etc? Or do I need to have homeseer only switches if I want them included in the central scene groupings???

I got these installed today, getting everything set up was pretty easy.

Does anyone know how fast or slow the double and triple tap needs to be to register?
I only seem to get it to register a double or triple tap some of the time.

Does anyone know how fast or slow the double and triple tap needs to be to register?

If you watch the Homeseer video on their website it shows it being demonstrated. What helped me was watching the ST mobile app and watching the screen for the switch because you can see it reporting what it is seeing.

HI
I bought 2 of those switch ,any way to turn off led on the switch after the switch is unused?
anyway to set hte 2 hold option tiles in the smartapp to dim up and down?
Also can it be possible to light up without passing throu the dimming just 0% to 100%

Thanks for your works

I am wondering, if I only want the physical double and triple tap in certain locations in my house do I only require the homeseer switches where I want this functionality??

Can I use ge or some other less expensive switchs for in the other areas?? Can the homeseer switch include other brands of switches in their double and triple tap groupings?

Sure the Homeseer will include all other brands in their groupings but that is a function of SmartThings smartapps not the device.

Use the lesser expensive switches anytime you want just simple on-off control with a single push. If you want the additional control features from the same location like a double tap DOWN to turn OFF all switches (Z-wave, ZigBee, WiFi, virtual) you would need the Homeseer for that. OR you could attach a button controller next to the cheaper GE wall switch like an Aeon Minimote and push its buttons.

Maybe it is helpful for you to justify the price of the Homeseer switch this way because you are getting the z-wave smart switch and button controller all in one package. If you don’t need the button controller features just get the GE.

Is this switch an option in my living room where I have multiple zones of can lights? For example I can turn all on with one tap or each individual zone on with 2 or 3 taps etc?

Is this switch an option in my living room where I have multiple zones of can lights?

If you are able to to manually turn off or on a lighting zone by SmartThings manually then you can have the HomeSeer switch do it for you automatically. It acts like a button controller so YES, it will turn on or off whatever smart switches/outlets you have so as long as your lights are controlled by zone with it’s own individual smart device. I setup mine for watching a movie in the den where my TV is so that when I triple tap UP I turn off the floor lamp, the fireplace lighting, the ceiling fan light, the dining room lights plus dim the torche lamps to 30% in the den. This is all done by the switch using the Button Controller Plus smartapp.

So what are they are they talking about when they say ‘all the wires coming into this device’? Because if it is just a ‘remote’ it only needs power, correct?

The way I understand it. Is it’s a “switch” that the firmware can recognize multiple taps. In turn it sends out a scene code in response to those taps.

So basically it is a switch, that can also function as a button / scene controller utilizing the multiple tap abilities of the firmware.

So the wires from the ‘scenes’ must come into it right?

So the wires from the ‘scenes’ must come into it right?

No, the wires are because it’s a “switch” it’s controlling a load. Push on turns on light, push off turns off light.
The scene stuff is the switch recognizing you did a “double tap” so the firmware of the switch says “OH that’s a double tap” . Depending on what your using to read the output of the switch, (button controller app, core app ) you can perform other functions based on that double tap.

I hope that’s right. Just how I understand it in my head.

Another example that relates to me specifically.
I currently have GE switches in a 3 way in one room. The switches control the ceiling fan light. I have another GE switch in the fan shrowd controlling the fan. Now if I want to control the the fan I HAVE to use an phone, Alexa or or some other controller since I can not get to the switch.

In theory, if I replace my GE light 3 way switches with this switch here. I still get the same light on / off control. The added benefit is I can now use software to read the multiple taps on the same switch controlling the light to control the fan.
I don’t have to get out my phone, or tell Alexa to do it for me. I can just double tap the switch and it will control the fan.

This is on my ToDo list, just need the switches and more importantly the TIME to try it out.

I am curious does this Device handler allow these switches to appear as ‘Local’ to the hub. Specifically will the double tap and triple tap work if the internet connection is down as well as having the improved latency when the internet is up?

Can this device be in the aux position of a 3way wiring configuration?

I believe the switch being discussed here is the master. They make a auxiliary that would be used in the 3 and 4 way setups.

Unfortunately no. All custom device handlers/smartapps are not treated for local processing to a Hub ver2. It is my understanding very few smart apps like SmartThings Smart Lighting, Smart Home Monitor app in conjunction with standard device types.

Continuing the discussion from What's the deal with Nest?: Correct. I was answering this question below in the global sense. i.e., There will always be the possibility of various benefits available to Official Device Handlers and SmartApps that are not available to un-certified Community Developed ones. At the moment, the local processing benefit is inapplicable to Nest in either case. I’m not sure ST has guaranteed that community developed SmartApps/Device Types will be included in local processing right after certification. Yes, it may be included down the road, and this is not yet clear on how or what the process is to enable community developed stuffs to run locally.

Hi there, thanks alot for creating this,

Im am currently into a wierd issue where the WD100+ dimmer keep being shown as “ON” under my things on the smarthings android app.

Let me explain, i press off … it turns off, all good, i change screen on the app, go back to mythings, and it shows its on again

its only on the app tho, the lights are off still

Any help on this?