"Notify me when" duplicate alerts

I’ve installed this smart app for my lights to tell me when the lights are on or off. When the lights go off I get “lights off, lights on, lights off.” When I adjust the on/ off times I get the same message, even though I’m not turning the light on or off- in that instance it never actually goes on. I’ve tried to create separate “notify me when” alerts for the switch being on or off and it makes no difference.

I’m often a little slow but I’m not clear what qctions you are setting events for and what’s happening to trigger the messages or events. A simplified sequence list posted here might be clearer. Of course, others may be totally clear what you’re saying and be more helpful than I.

Sorry for not being clearer. I’ve attached 2 screen shots to help. I signed up for “sms message alerts.” 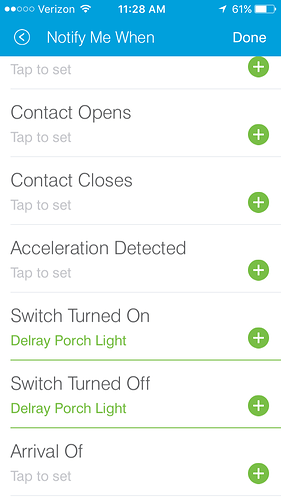 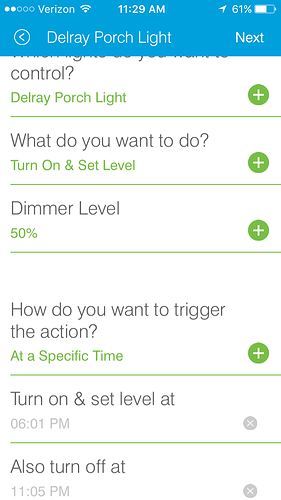 Is the only place you’ve specified to send you messages? Do you have alternate routines for the same lights elsewhere in this app, any app or the ST app itself? What you’ve done seems pretty straightforward. A thing you might try, although it’s a problem if you need to do this is to eliminate the “Also turn off at” step from this routine and save that, then make a new routine with no info in it other than selecting the same lights and adding ONLY the turn off time. That’s what I would try anyway. After doing this I would log out of the app entirely then log back in. If you want to test this without waiting for a whole day, you can change the time to say 1/2 hour from now and the request the turn off routine 15 minutes later or so. Just a thought.

Thanks for trying to help. Yes- its the only place I’ve requested an alert. I have tried the “separate routines” for on and off, didn’t fix it. What is also interesting is that when I go into the smartapp to adjust the time, it send me multip,e alerts: “on, off,” but the light doesn’t go on- false alarm. Oh well…

[quote=“Bajanjack, post:6, topic:36958”]
I have tried the “separate routines” for on and off, didn’t fix it.
[/quote]I know this doesn’t solve your problem, but have you looked into Rule Machine? I’ve found that it’s sometimes easier to create a rule that does exactly what you need than to try to troubleshoot why things in other apps aren’t doing what they should.

Trying Rule Machine or Smart Rules is a good idea, but before that, maybe the problem is the Notify Me settings. Have you tried deleting those and adding first only the turn on message, deleting that and creating the light is off notification, then adding them both back as individual or a combined rule? I hate giving up (!) but I’m terrible at fixing things via internet or phone.

Thanks guys- I will “play” with “notify me” and see. I’ve not done well adding device mgrs, and simple things like copying and pasting code for smartapps. If this doesn’t work I guess it’s worth the several bucks for smart rules. Let’s see…

[quote=“Bajanjack, post:10, topic:36958”]
If this doesn’t work I guess it’s worth the several bucks for smart rules. Let’s see…
[/quote]I would definitely try what rudyinDana suggested and hopefully that will solve your problem, but if it doesn’t you could try setting the “Minimum time between messages” setting to 1 minute. That’s assuming that when you’re not adjusting the settings, the first notification you’ve been receiving has been correct.

Thanks. Gonna give this a day or so and if not successful give smart rules a try

BOOM! Didn’t even think of that and that’s brilliant.

I did get smartrules and it fixed part of the problem. Good news- my “Delray” hub now works great- no duplicates etc, including notifications for door lock. Bad news- even though the app show you multiple locations to load it’s only good for one hub! So I can’t use it to fix my other one. I had to write to support because I couldn’t figure it out- they don’t tell you that upfront, nor is it intuitive within the app. Damn!