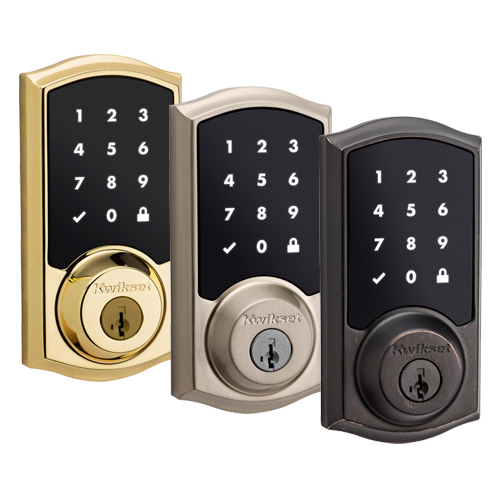 Check out our new Device Type Handler for ZigBee locks!

This is great!
But can someone highlight the key advantages of using Zigbee Locks over ZWave locks other than the fact that Zigbee is a worldwide frequency…?

We’re seeing better handling of battery events on the ZigBee models. At the end of the day the functionality is pretty much the same if not the same.

The most important part is that the ZigBee locks will benefit from the SmartThings SmartPower Outlet and the mesh network improvements from other ZigBee devices.

Did you go to a Canadian Home Depot and picked each and every and only Z-wave devices on the shelf?

Hey @Tyler for people who already had the Leviton switches, are there new device types for them, or they use the same general z-wave switch type? (meaning do we need to re-include them?)

A lot of the zwave locks use a wierd protocol that requires special zwave repeaters to repeat the signal. This caused problems for people that had locks that were a good distance away from the hub.

If you have smartthings outlets you will be all set as those are the only zigbee repeaters that are brand agnostic.

And Samsung had better leave them that way. They have a history of brand lock in, and they had better not spill that into smartthings.

Nothing needed on your side. The work we did for the Leviton devices was testing and verifying that they worked with our existing device types.

I have a Kwikset 914. If the handle is turned by hand, SmartThings does not update and still shows the old state. Is this a known issue with this lock?

This is great!
But can someone highlight the key advantages of using Zigbee Locks over ZWave locks other than the fact that Zigbee is a worldwide frequency…?

There are pros and cons for both.

Zwave: the fact that boosted Wi-Fi does not interfere with Zwave sometimes makes DIY installs easier for fixed point devices like locks, window coverings, and light switches. (The things you can’t just move 2 feet to the left.) Historically, I believe this is the reason for the dominance of zwave for DIY devices in these categories in the US. However, as Tim mentioned, the “beaming” repeater requirement sometimes means you have to buy an extra repeater just for the zwave lock. Zwave is limited to 232 devices per network. And it basically lives in its own world, which is good and bad.

Zigbee: as Tyler says, usually better battery life and smaller devices. Also tends to travel a little better through water (both rain and pipes in the wall).

Depending on how they’re configured, Zigbee networks can handle thousands of devices, which becomes important for hotels, hospitals and big apartment buildings.

Having only one standard internationally is good, but in practice different manufacturers add their own encryption layers anyway, so it’s all too easy to get a zigbee device that doesn’t work with another Zigbee device.

Different countries also have different power output regulations, which means a lot of the “amplified zigbee” devices which are used in the US cannot be sold or operated in the EU, for example.

Professional installers from companies like control4 tend to like zigbee because they already have the tools to deal with proper device placement and mitigate interference, and they like the proprietary stuff that you can do with it because they can create brand differentiation.

Just as an example, the built in secondary controller logic that is in Z wave is usually pretty easy for DIY people to use (although it’s not supported in the SmartThings multi protocol concept). But control4 built their own secondary controller architecture over Zigbee, and it’s great. (Super expensive, but great.)

As far as the future goes, Zigbee and thread (from Google) can run on the same physical devices. Literally the same device can run both protocols. No one’s quite sure how that’s all going to play out yet, but The thread group and the Zigbee alliance do have a partnership, and Zwave is kind of out there on its own.

So as always, preferences come down to individual needs. The DIY landlord who has a duplex house with two apartments that she wants to outfit in the US would probably find zwave easier to deploy.

A professional installer Setting up in a 2,000 bed hospital will almost certainly prefer zigbee.

Outside of that, it’s just going to come down to a lot of individual factors, and many people prefer a mixed protocol option like SmartThings offers.

Note to people looking for buy the plug in modules: I think that Amazon has the wrong pictures put up on their site for the appliance vs. dimmer module.

Generally speaking on/off appliance modules have the third (ground) prong. And most z-wave modules that don’t are dimmers. (Please note that this in general. There are exceptions of course.) So that was my first concern when looking at them.

These two things together really make me think they mixed up the pics on Amazon. Definitely do your research before buying if this will be an issue for you.

I’m trying to add my 914 lock by selecting it under devices and locks. But it’s not coming up (have removed it and Initiated pairing ). Do I need to install this device type before doing so ? Thanks.

Update : scrap that, I was not waiting long enough between pressing b nine times and then a button four times. Rookie error

Great work team ST! Only request is to add code manager and run routine when certain codes are entered. My cleaners keep turning my light switches off as its in away mode when they arrive ! First world problems.

Hi @joel_eggenhuize, if you turn the inside lock handle by hand does it update the status in the SmartThings app? My 914 doesn’t do this and I’m trying to figure out if it’s all of them or just mine… Thanks

will check tonight for you

it does not update the status if i manually turn (which is what I was hoping the release would bring!)

Ok thanks. I think it’s a problem with the firmware in the lock. I asked Kwikset about it and they kinda blew me off. Maybe if SmartThings asked about it something would happen, but not holding my breath.

@Tyler, could you please list the model numbers that were actually tested? The links in the opening post of this thread do not identify these models, nor provide a means of distinguishing them from similar Zigbee models on the market for proprietary systems, namely Control4 and Crestron.

Yes, the compatible product page for SmartThings does list Kwikset products by model number, but some of the model numbers appear to be incorrect, since they indicate compatibility with Control4 systems. I suspect these are not actually compatible with the Hub:

Check the device type here for the full fingerprint list:

As far as I know all of the ZigBee HA 1.2 models from Kwikset will work with SmartThings. During our testing we didn’t hear from them about any models that wouldn’t be compatible. We specifically tested the 910, 912, 914 and 916 - all HA 1.2.

I’ll send an email and ask about the ZBC4 models.

Sorry Newbie here, but I just bought a Kwikset 910 Zigbee from BB. I can find the device and add it just perfect. But when I hit lock or unlock in ST it does nothing. I can see it in the logs and see when it locks and unlocks with a key code but the app does not work. Any help would be appreciated. Thank you