I have a Stewart Filmscreen projection screen and it is equipped with a somfy motor and a somfy SFC controller (part no. 1822163) and a wall switch.

Option 1: I would like a solution where I can connect a 12V trigger (3.5mm banana tip) so it can be controlled by my amplifier while also having a Z-wave/zigbee feature so I can control it with my ST hub and still use the wall switch just as back up in case I’m not home and a guest needs to operate the screen in manual mode. Does such a set up exist?

Option 2: Get rid of the wall switch all together and have a 12V trigger with a Z-wave/zigbee feature?

Option 3: just have a z-wave/zigbee device that communicates with my ST hub to control the projection screen.

I think this is a bit different than a traditional switch since it has open, stop and close buttons.

Can this work with a Sonoff device? or what things do I need to piece together to make this work?

I built my screen and projector (12v trigger out, RS-232 control in, RF-433Mhz to the screen for up/down) controller using the SmartThings ZigBee Shield (now discontinued) and Arduino.

You can do the same using WiFi instead of ZigBee / Z-Wave using an ESP8266 or other WiFi MCU.

Ref this Topic below:

My SmartThings + Arduino sketch does 433mhz transmission to raise and lower the screen, 12v trigger signal detect to activate the screen if ST is down, and on/off/mode via RS232 for the projector! Here’s the DTH: And the Arduino Sketch… *Dang… Not in the same Repo. Post it later.

So, your controller has 4 inputs? Up, Down, Stop and Common? Is the controller single push or hold to move?
In other words, to go all the way up do you have to press it once or press and hold it.
Assuming it’s press once for full motion, you would need a 2 relay system. When you want it to go up, you would close off the contact between up and common for a second or two. When you want it to go down, you would have to connect between down and common for a second or two. Of course, that’s if you want to keep your current controller.

You could also just but the Quibinocontroller for motorized shades. But you would have to swap out the controller. 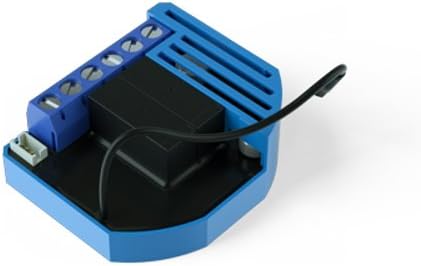 Extremely small size and a specially designed casing mean that connecting the module inside a flush mounting box is simplicity itself. The installation process, tested and approved by professional ele ...

I think this is a bit different than a traditional switch since it has open, stop and close buttons.

Stewart sure sells a lot of variations of controllers (http://www.stewartfilmscreen.com/support/control-systems), but I’m curious if your switch already has remote control via IR or RF?

In either case of IR or RF, the Arduino solution saves you from having to mess with your controller box (and void its warranty), and also retains 100% control via existing remote and existing touch operation.

The relay system of the controller is likely pretty trivial and easy to replicate, but that introduces a lot of risks.

My single tiny Arduino controls my projector (Epson) on/off via RS-232 and the screen (via $12 RF chip), and the screen can be triggered by SmartThings or via analog Voltage sensing from the 12V trigger on the projector. I’m rather proud of the configuration.

It’s a real shame that SmartThings discontinued the ZigBee Developer Shield, but using WiFi instead is not that much harder.

So, your controller has 4 inputs? Up, Down, Stop and Common? Is the controller single push or hold to move?
In other words, to go all the way up do you have to press it once or press and hold it.
Assuming it’s press once for full motion, you would need a 2 relay system. When you want it to go up, you would close off the contact between up and common for a second or two. When you want it to go down, you would have to connect between down and common for a second or two. Of course, that’s if you want to keep your current controller.

I’m not so sure. I’ve attached drawings of the connection. I was hoping to put in a T joint if you will that will allow me to trigger the screen using a 12V trigger and use the wall switch together. Do I use a momentary relay switch? and connect a 3.5mm female connector to one of the ends? Will this work?

Do I use this 3.5mm female connector? HERE

Is this the correct momentary switch? HERE

No, let me clear a few things up for you…
Your switches are Momentary Switches to go up and down. You can see in the drawing that it says momentary switch. What that means, is when you press the up button it grounds out the connection between up the up wire (Red) and the common wire (white). Same for the other three buttons. These are labeled as low voltage but without taking a multimeter to them, you don’t really know what voltage they are. They could be 12V they could be 5, they could be 3.3 or ever (though I doubt it) 1.7. what you will need, is up to 3 relays or a minimum of 2 if you want to go up and down. Pardon my quick drawing but it’s late.

I substituted green for white since white wouldn’t show up. But since white is your common, green is in my drawing. When you want the screen to go down, you will turn on the down relay for a moment, simulating the pressing of the down button. When you want it to go up, you would momentarily turn on the up relay, causing the screen to go up. Now, if you use normal relay devices, when you turn them on they stay on. So you would need to have a rule somewhere in ST (smart lighting or webcore) to turn the switch off again after a couple seconds. Otherwise you might burn out your controller. Leaving it on for a couple seconds won’t hurt anything, I’m sure it can handle those could of seconds.

Now, you could also use a 2 relay device but you would still need to wire but both common wires. DO NOT connect the red to your NO on your relay and the black to the NC. That would mean that either the up or down is being pressed constantly and you will burn out your controller. If you get the device like you linked to, I don’t know that it would be able to integrate into ST. What you want to do, if you’re looking for cheap, is look at the ST_ANYTHING or the OmniThing Projects. (both clickable links) Now, these are more DIY and might not be up your alley. If you’re looking for an off the shelf device, then that would depend on what the actual voltage reading on the momentary switch is that you have now. It’s it is 12V, then you could use something like the Quibino dual channel z-wave relay. (clickable link). They call it the Flush shutter. Or if you are going to power it from 12-24V, the Flush SHutter DC.

However…as the name suggested, this device can control your shade (screen) but itself, without your current controller and has the option of a manual switch. So, if you’re going to spend the money anyway, it might be easier to just replace your controller, rather than trying to rig something to it. Personally, if you’re not going to go the DIY route, I would just replace it with a Shade/Shutter controller.

ST_Anything with a ESP32 and a couple 3.3v pilot relays (in case the voltage is 12v and more to protect the ESP32) could easily do this for about $20 but as @Ryan780 said it depends on how much you want to DIY this and your comfort level with building something.