Anybody have reliable experience with Motion / LUX / Temp sensors? Something other than what I just tried?

I happened to just get a Fibaro FGMS-001 ZW5 v3.4 motion sensor a couple days ago.

My pairing experience was pretty inconsistent: the first couple times I paired it with my ST Hubv2, it came up as a simple OPEN/CLOSE switch (actually - as a SENSATIVE STRIP). Then, finally, after a couple more EXCLUDE/INCLUDE’s, it came up as a FIBARO MOTION SENSOR. But, even after a day or so, it only reported TEMP & LUX data back to ST - no MOTION or ACCELLORATION data was ever reported.

So I did the exclude and re-include thing, and it came up as SENSATIVE STRIP again. Excluded and included one more time, and it came up as FIBARO MOTION SENSOR, but again, no MOTION data. (IDE shows type: Fibaro Motion Sensor ZW5)

Pretty inconsistent. And no motion data. Has anyone used this device and had it report motion data to ST? I’m about ready to return this item but want to make sure I’m not missing some configuration step. (I’ve found their Tech Support does not pick up the phone and their voicemail doesn’t accept messages.)

Thanks for any thoughts!

Tagging @Mariano_Colmenarejo and @csstup since both have recently been doing a lot with zwave sensors.

It looks like it has support in the base Edge Zwave Sensor driver. 010F-0801-XXXX would match. It would just be basic functionality, no custom parameters.

Do you have the Beta Edge Z-wave Sensor driver installed? I would try with that.

A screenshot of the device’s fingerprint data (in the data section) from the IDE may help too.

I used these for a while ('cos they look cool) but had reporting issues too and found the Lux readings to be somewhat erratic. They also tended to drop out and need rediscovery, especially on battery replacement (which was quite often!).

Generally unreliable so I ditched them a while ago and now have Aeotec trisensors and and a multisensor 6.

I find the Aeotec sensors to be reliable and accurate. Never had one drop out and all paired first time. Batteries seem to last well and Lux is far more consistent. The motion reporting slightly lags behind a SmartThings motion sensor but nothing too significant and still an improvement on the Fibaro.

Currently running these on the stock DTH with one trisensor on the Aeotec edge driver - no issues.

(Just to be fair I have not tried the Fibaro on edge, just various DTH drivers)

Is this the fingerprint data? 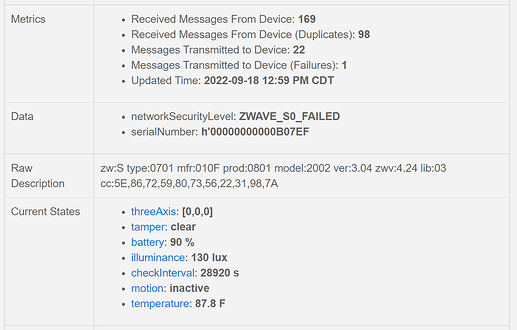 and are you suggesting I try changing:

Is this the fingerprint data?

are you suggesting I try changing:

No, you can’t do this thru the IDE.

any custom DTH’s installed for this device in the IDE

Yeah, so I didn’t install a custom DTH… It just included with that “Fibaro Motion Sensor ZW5”.

I excluded and then did a SCAN NEARBY. It took several attempts, but if finally showed up… as “Strips By Sensative”. Does that mean I didn’t get the beta driver installed correctly? or that it thinks I have a fingerprint match elsewhere?

I excluded and then did a SCAN NEARBY. It took several attempts, but if finally showed up… as “Strips By Sensative”. Does that mean I didn’t get the beta driver installed correctly? or that it thinks I have a fingerprint match elsewhere?

Hmm… I would have expected it to join correctly with the zwave sensor driver you installed.

The old “built in” DTH based driver has the following fingerprints:

The beta driver has:

ok… so I guess it’s time to return the Fibaro?? Unless you have other suggestions… (I SO appreciate your efforts!)

so I guess it’s time to return the Fibaro?? Unless you have other suggestions…

Couple things I would check:

Without having the device here its hard for me to see what its doing and why. Another user has said they didn’t have a great experience with the device, so that might weigh into your decision too.

go to your hub’s device tile, under 3 dots choose “Drivers”. Make sure the Zwave Sensor driver you installed earlier is actually there.

Look in the IDE to see what the new join reports as. 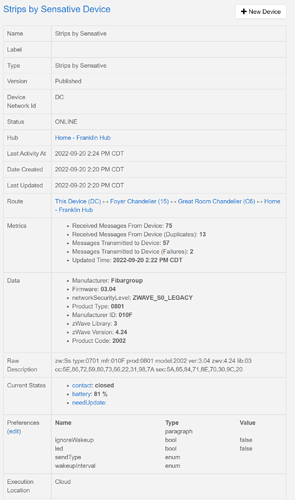 The fact that its joining with the “Strips by Sensative” driver is odd. That reference isn’t listed in the SmartThings DTH driver repository so there must some other logic taking effect here. It might take contacting FIbaro support to work with ST to make sure that your device is working correctly with Edge.

The fact that its joining with the “Strips by Sensative” driver is odd. It might take contacting FIbaro support to work with ST to make sure that your device is working correctly with Edge.

Fibaro support has taken the position for several years that their devices are certified to the independent Z wave third-party standard and they are not going to do anything further to make them work with proprietary platforms. Which includes both SmartThings DTH’s and smartthings Edge drivers. So they will just tell you that their device works fine with a certified Z wave hub using Zwave commands. For anything else you need to contact the hub manufacturer.

It’s not an unreasonable position for a company to take, although they don’t express it with much sympathy.

It’s not an unreasonable position for a company to take, although they don’t express it with much sympathy.

It feels to me like Sensative wedged something in there as part of getting their devices WWST and its overriding the normal logic that should take effect to properly join the Fibaro, 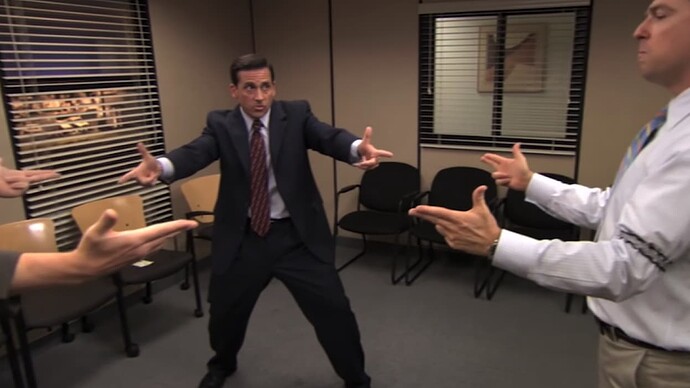 Fibaro support has taken the position for several years

So what do you guys think, then? Return the Fibaro device while I can get my $$ back?

…And what are your favorite comparable devices I might try instead?

It seems like weird device types started being picked once they introduced edge into the fingerprinting process. I’ve never tried to do a partial edge fingerprint match like this where the model isn’t present, so I’m not sure if that actually works to bring it into edge right now. I’m betting what’s happening is that it’s failing to get pulled into edge and then it’s just getting the wrong DTH. This probably needs the full fingerprint in the edge driver.

What country are you in? The device selection does vary.

At this point, to be honest, I’m delaying all hardware decisions until smartthings platform transition is complete and matter is out.

But if you forced me to pick a zwave sensor today, I would look at Zooz as being the most likely to work well with edge drivers.

Even though Aeotec is the hardware partner for smartthings, they seem willing to let compatibility with the platform drop to just basic features. (See, for example, the Aeotec wallmote quad, which supports more features with most other Z wave hubs than it does with smartthings.)

This probably needs the full fingerprint in the edge driver.

You’re probably right. Makes user testing the beta edge drivers that do have partial matches as fingerprints contained within difficult though.

…And what are your favorite comparable devices I might try instead?

Are you wanting Lux/temperature and motion? Or just motion. And what is your use case for motion? Security? Lighting?

If I was getting motion for indoor lighting I would probably go Zigbee with Hue sensors. Temperature I would do with other sensors.

Yeah, I need LUX and MOTION… would like to have TEMP, too.