I am using the ST environment, have two Ring cameras, and integrate all with Echo (Alexa).
I would like to add some basic alarm functions to my system but find it difficult to do in ST. I am considering migrating most of my sensors to the Ring Alarm system to make this process easier. What are some of the pitfalls I might run into in doing so?

Can I run both Z-wave systems side-by-side (if needed)?

Can you confirm that I would have to remove the devices such as contact sensors from the ST hub in order to add them to the Ring Alarm hub?

Or if all you need is something simple like those lights turning on, you can just do that and skip the virtual device. The Alexa routine doesn’t run locally, and it’s definitely a little more work, but it is doable.

So if you do currently have ring brand sensors connected to your smart things hub, then exclude them and remove them from smartthings, then you can include them to ring.

like I said, you may already know that, but I do often see when people are moving devices from one hub to another that they don’t take into account the difference in available repeaters and then they think that the new hub doesn’t work very well when in fact it’s just a matter of network layout.

I run both ST and Ring systems in parallel (side-by-side). There is a 100 device limit with Ring, but just like with ST you can run more than one hub (separate accts with Ring). only a hand full of non-Ring devices are compatible with Ring, but over the last 2-3 years they are adding more. Some of the major compatible devices are FA smoke/CO alarm and Ecolink tilt sensor. the dome siren is also compatible, but quite a joke when they say the neighbors will hear it cause it isnt that loud. I hacked a couple of them to trip a relay and trigger a horn siren. you can get some good deals on Ring device sensors on ebay especially during or right after holidays when people buy the Ring kits that go on sale and sell their extra pieces. i.e. $30-40 Ring Key Pad v2, $20-25 Ring Motion v2, $14ish Ring Contact v2, etc. I even use the Ring Retro Kit so that when then ST alarm goes off it triggers the Ring Alarm if not already triggered.

Thank you both for the very helpful information.

Out of curiosity, what basic alarm functions in SmartThings are you finding difficult?

Two things, really.
Finding a suitable alarm siren. Actually, instead of a siren, I would prefer to have alert announcements made by my Echo devices (Alexa) but I know that the Ring alarm system won’t solve this.
The ability to easily control which devices (particularly my Ring cameras) are used in Armed-stay and Armed-away. This is particularly difficult using ST.
Thanks for your interest.

I would prefer to have alert announcements made by my Echo devices (Alexa) but I know that the Ring alarm system won’t solve this.

You can do this, but you have to set up one Alexa routine for each ring sensor, which is super tedious. And there’s a max of 99 routines per Alexa account.

Here’s one we use: 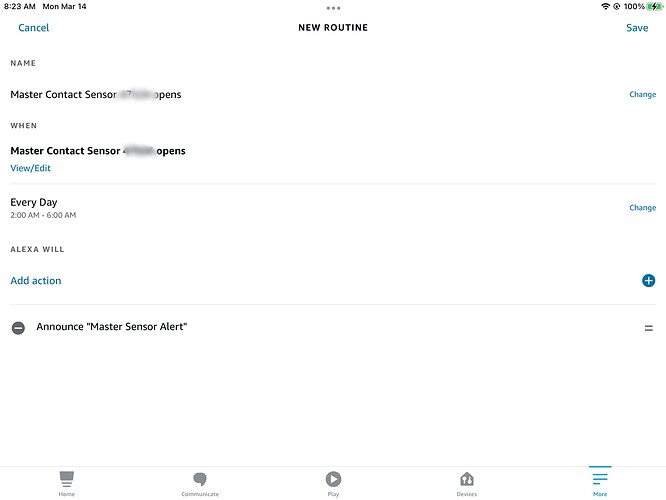 I would prefer to have alert announcements made by my Echo devices (Alexa) but I know that the Ring alarm system won’t solve this.

Add it to your STHM response, then create an Alexa routine with it as the trigger and the action could be whatever you want. Spoken alert, play a song, etc.

The ability to easily control which devices (particularly my Ring cameras) are used in Armed-stay and Armed-away. This is particularly difficult using ST.

This can be set in STHM settings, but the UI isn’t very intuitive. If you turn off the toggle next to “use all motion sensors” and then tap the text you can select individual motion devices.

Out of curiosity, what basic alarm functions in SmartThings are you finding difficult?

Obviously I’m not the OP, but our main reason for having a separate security system besides reliability, battery backup, and local cellular connection to a professional monitoring service (all basic security functions for us) is the ability to change security mode locally. Last time I checked, STHM still required an active Internet connection to change mode or send notifications.

One of the other reasons for moving to the Ring alarm system which I meant to mention but forgot is I would like to get away from the special drivers, etc., that ST is noted for (and liked by many people). I want to keep things as simple and basic as possible.

So, I just thought I would add this curiosity about the Ring Alarm Pro.

I’ve had it for a while, mainly for it’s ability to record video locally onto a Micro SD. It works pretty good, and coincidentally, that ability is called Ring Edge. I have no idea if Smartthings could make use of that, but I needed it due to upload bandwidth constraints.

It also has an AT&T cellular card which can be used via subscription, which may be included for anyone newly subscribing to Ring Protect Plus, i think, I’m not sure, as I’m on a grandfathered $10 plan for another few years, which doesn’t include the backup cellular. But whenever I buy a new Ring camers and add it to my location, it adds 30 days free cellular backup (a few gigabytes or so), at least so far it has.

Other than that, it has a Zigbee radio onboard, but I don’t know if it will ever be enabled, I’ve not found much information about it.

I’m using it as my router, with a mesh node as well, but it mainly is for the local video storage.