I am still fairly new to SmartThings and Connected Home. I got the V2 hub in Dec and I have been slowly adding new devices as time and budget have permitted. I started out with Leviton Z-Wave Plus switches (DZ6HD-1BZ (Dimmer), DZ15S-1BZ (non-Dimmed) and Plug-In Outlets (DZPA1-2BW) because I have used Leviton in the past and I have been very happy with them. After installing 5 switches and 4 plug in outlets, I am still very happy with them. They have worked without issue and they also provide the benefit of acting as Z-wave repeaters for devices a bit further from the hub. I also chose switches over the smart bulbs, because many of my fixtures have multiple bulbs and the switches were a less expensive means of controlling the lights, not to mention I didn’t want to have another hub, like the Phillips Hue Bridge to integrate. Everything was going fine until I went to replace a switch in my 16 year old house and found that there was no neutral wire in the box. I assumed I would have to find an alternate solution for this switch and moved to the next switch which also did not have a neutral wire. After doing some more research, I have seen that the Lutron Caseta product does not require a neutral wire for its switches and it also offers the option of a Ceiling Fan controller that can also be integrated into SmartThings. However, this does require an additional hub. So my question is what should I do as I move forward?

Is it possible to integrate both the Lutron Caseta switches and the Leviton switches into the same SmartThings hub?

Will they work together (eq. could you have an automation that turned on both a Leviton switch and a Lutron switch?)?

Are there any other things I need to be aware of with the Lutron switches?

If I were to replace all of the Leviton switches with Lutron and continued to replace all of my other switches, I will eventually run up against the limit of 50 devices on the Lutron. Given my current speed of replacement, this will be several years down the road, should I worry about this?

Any thoughts or advice on these items would be appreciated. Given the size of the investment in switches, I would like to make the best choice moving forward.

You can certainly have them both working with the same SmartThings Hub and in the same automation rule, but the Lutron integration does require that you also have their SmartBridge device. Since that’s very similar to the hue bridge, I am not sure that’s what you were looking for. On the other hand, the Lutron are excellent switches.

That said, at the present time the lutron fan switch, which is a very new device, does not work with SmartThings. Also, for technical reasons, as you noted that particular model does require a neutral wire.

Something New from Caseta is coming soon! I wonder what it could be. The announcement should be posted in the next few days.

There are some other fan control options that might work for you. Have you had a chance to look at the fan FAQ yet? Although it says Alexa in the topic title, it applies to all fan integrations with SmartThings.

I have seen that the Lutron Caseta product does not require a neutral wire for its switches and it also offers the option of a Ceiling Fan controller that can also be integrated into SmartThings. However, this does require an additional hub. So my question is what should I do as I move forward?

I have just finished installing Lutron Caseta Switches, Dimmers, and Fan Controllers in my home. It should be reiterated that the Caseta Switches and Fan controllers do require a neutral wire. I believe there is one special model Caseta switch which does not, however it is fairly pricey. The Caseta dimmers are the ones that do not typically require a neutral. It should be noted that these dimmers do cause 60Hz buzzing on most LED bulbs, and will not work well with compact fluorescent bulbs. Incandescent bulbs work great, however use more energy.

If you decide to head down the Lutron Caseta path, I would recommend you buy the Lutron Caseta SmartBridge Pro2. This model has the advantage of support local LAN integrations via its Telnet interface when used with some platforms. This allows for seamless integration with Hubitat Elevation, for example (should you ever decide to try another platform.) Energy Avenue sells these for $88 and also has some very good prices on switches, dimmers, claro wall plates, and pico remotes.

My Lutron dimmers work just fine with LEDs. No buzzing. I have used both FEIT bulbs and some from the Lutron tested list. Buzzing is not a commonly reported problem in the reviews, but it’s always a combination of the wiring, the fixture, the bulb, and the switch, so I don’t doubt that you had a problem. I just don’t think it’s a very common one or they wouldn’t be as popular as they are .

Yep, I used that tool and landed on the Phillips dimmable LED bulbs. Much quieter than others I tried, however I can still hear the 60Hz buzz, especially in bathroom vanity fixtures with 5-6 bulbs all at once using A19 bulbs. Using BR30 Phillips dimmable LED’s, I cannot hear any buzzing. I had 9 Feit BR30’s in the kitchen, that buzzed like crazy when I installed the Caseta dimmer.

Definitely just need to find the right combination. Problem is that manufacturers change their designs over time. What was quiet last year, might be noisy this year.

Thanks JDRoberts. I had already seen several of these posts but there were several new ones as well.

Thanks to everyone for your advice. I think I now have a plan forward. I am going to continue to deploy the Leviton Z-wave dimmers/switches in locations where I have a neutral wire. The Leviton switches are about $10 cheaper than the similar Lutron Caseta switches, plus I get the advantage of them being Z-wave repeaters for some of my motion and leak sensors that are further from the hub.

In areas where I do not have a neutral wire (right now I only have 2 switches in this condition, but I may find more as I continue to replace), I am going to purchase the Caseta Smart Bridge and the dimmers that do not require a neutral wire and use them there. I can get a kit with the bridge, 2 dimmers and 2 pico remotes for $150. I couldn’t find a similar kit for the Smart Bridge Pro 2 and if I have to purchase all of the components separately it would cost around $240. If I end up eventually wanting to integrate other devices to the Caseta, I will have already saved enough to buy the Pro bridge and I’ll just donate the regular bridge to friends or family. If I end up with bulb buzz as some have reported, I’ll go to the recommended bulb list and do some swapping out. I transitioned most of my bulbs to LED’s several years ago and I have mostly Cree in the house. So we’ll see what happens.

I am going to wait on the fan controller as these are not at the top of my automation list, perhaps Leviton will eventually come out with a Z-wave device, so I would have a similar look and feel, if not, then I’ll already have the Lutron bridge ready to accept them and maybe they will Work with SmartThings by then.

I’ll continue to update on my progress, but thanks again for helping out a newbie.

Leviton does have a fan controller switch which is zwave, but it is quite expensive and doesn’t look like any of their other current model switches, so it’s not very popular.

It is on the official “works with smart things“ list, and it works fine. It does require a neutral.

If you have any three-way set up’s, the pico remote which works with the Lutron switches is quite inexpensive, and so you do recoup some of the cost that way.

The Lutron smartbridge pro kit only has one dimmer in it: 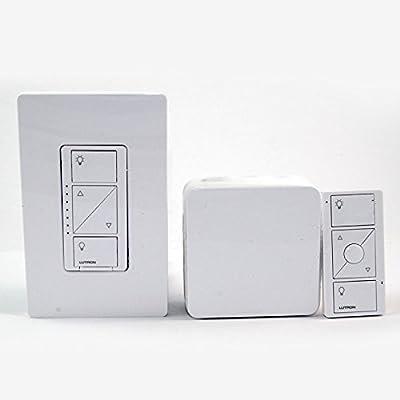 Yes - I saw that and really liked it. One of the switches that I am replacing that doesn’t have a neutral is in my kitchen and I have always wanted another switch for these lights on the other side of the kitchen, the pico switch makes this easy and no wiring required.

Thanks for pointing this out. after your previous post I went to Energy Avenue and saw the bridge and the switches, but I was only seeing the switches in the $60 range. A bit crazy that you can get a kit with the switch, pico remote and wall plate for less than the switch. This definitely makes the pro 2 bridge a bit more attractive.

Thanks ogiewon, I ordered the pro2 Bridge and the switches today and got the free shipping.

Just wanted to provide an update. I received the Lutron SmartBridge Pro2 and 2 switches with the pico remotes. I installed one switch in the kitchen and connected the pico remote and placed it on the other side of the kitchen, where I have always wanted a switch. It works great. I have ordered the wall mount adapter for this remote so that I can mount it in a box. The other switch has been installed. Both switches were easy to connect to the Lutron app and integrating the Lutron app into SmartThings was easy.

Thanks for the help from everyone.