Sounds like…it may not be “magic” but a back-end issue, if we all are starting to see the battery levels showing up mysteriously TODAY!

There are several threads in the past year that mention issues about battery levels being sporadically reported (or not at all). My two Kwikset 914 Z-wave locks are both reporting 80% and they were polled once, just several days ago. I have serious doubts that the level reported is accurate, because I have been using these locks for more than 6 months. My family is no longer carrying keys, so running out of batteries could be a costly event.

I have an open support ticket about this issue, but so far I was instructed to reset the locks, exclude/include, pull the batteries out, etc. I am not sure that any of these have worked. Is there anyone here that is getting updates consistently/periodically for their locks?

From another thread related to this issue:

yeah I will def write them - till working with them on getting Hue’s to work with V2. I never realized with V1 I didn’t have battery level until one night over the summer I was working late (out of state) and my wife got locked out because the battery died…and she forgot to put the spare key back…that was a very expensive mistake haha

ST Support’s only advice {to me} for missing lock battery status is to:

When I communicated back to ST Support that the lock battery display worked as expected in V1 hub, but not in V2, they still replied (after 24 hours) with the exact same helpless message, like this is NOT a ST V2 issue, which I have seen several V2 migrators reporting this exact same issue.

I think that lock battery status is periodically pushed by the Z-Wave lock to the ST device handler, at some random frequency. I am not certain why the Kwikset 916 lock in acting differently with this V2 hub than V1, but all of a sudden the lock battery display reports 100% for my batteries that have been in the lock for 21 days of use…

I am bit suspicious that this battery status is inaccurate, luckily the 916 Kwikset beeps when battery levels are low. So much for a simple battery status by SmartLessThings 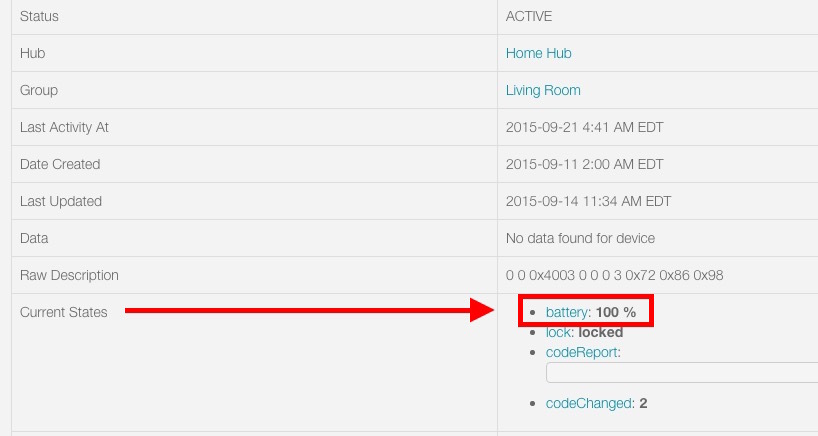 My family is no longer carrying keys, so running out of batteries could be a costly event.

I see that you say “locks” in the plural, so I assume you have more than one? We do as well - front door and side door. One thing I have done to mitigate this to put the locks on different battery replacement schedules a few weeks apart. That way, in theory, one should always work.

A lot of times, the “non-tech” solution is the simplest…

Yeah, I’ve learned my lesson over the years that with any HA projects you must have a plan B and sometime C. In this case the hidden spare was the plan B, but it happened once that we used the spare and didn’t put it back. And just like @Macadoodle, while I was at work my wife got herself locked out of the house. Luckily I wasn’t in a business trip, so it didn’t cost us a bundle

any update on this? i tried the device type suggested and still no battery from 914.

I was using the stock app and it works. It just reports changes every 10%. So you are ok

I think the battery reporting has always been flaky with these locks. When my front door, which get the most use, gets low I just swap battery packs with my kitchen door which gets very little automated use. The front door almost always reports that it’s still dead and the kitchen always reports it still have plenty of charge.
The only time I get proper battery reporting is if I install new batteries.

I think there is also a delay in the battery reporting. I’ve seen that on other zwave devices here in the forums. I’ve also seen the same issue with new batteries and a delay in showing it is 100%.

I think there is also a delay in the battery reporting. I’ve seen that on other zwave devices here in the forums. I’ve also seen the same issue with new batteries and a delay in showing it is 100%.

I agree with you on the random delay after a new set of batteries are inserted. Weird!

Others could comment on this more (@JDRoberts?), but it has to do with the way the zwave device reports that battery level. Even though some devices talk to the hub all the time (temp levels on a door sensor, for instance), I don’t think the data block containing the battery status is always transmitted. Sometimes that is once a day or not until there is a significant change in battery level.

I’m not familiar specifically with how a kwikset lock reports. But you’re probably thinking of tier reporting:

Here it is Jan 2018 and I have this exact issue. My Kwikset lock always reports 100% battery, and when I checked the device status via the smartthings developer site, it shows that the battery level hasn’t been reported since Sept 2017 — unfortunately mine didn’t beep and the batteries died. I have one entrance to my home, luckly I had a spare key hidden outside. My big worry was that this could have happened while I was on vacation and my pet sitter wouldn’t have been able to gain access

I don’t see any solution here… I wonder if it’s because the device handler is a generic one rather than a kwikset specific handler?