I think it screws up the smartthings integration completely, whether you’re using Sleepytime or the button controller. But I haven’t tried it. I still haven’t been able to get my jawbone connected with the new app.

Did you follow my dumb instructions which actually did pair it with ST? At times it is nice to remind the tiger how to hunt! So, proud to do something that JD couldn’t !

Did you follow my dumb instructions which actually did pair it with ST? At times it is nice to remind the tiger how to hunt! So, proud to do something that JD couldn’t !

I did, but it didn’t work. But I still have an up 24, maybe that’s the difference.

I am sure that for new Jawbones, the integration will bite the dust unless ST figures out something.

I looked at the smartthings code in depth, the problem is that jawbone stops sending events for start sleep and stop sleep, I’ve opened a case with jawbone support and have tried to elaborate and ask them to put this in front of the engineers, they need to either return the ability to tap (make it optional or something) or actively send state changes when it thinks sleep has started…

I’ll keep the thread updated with anything I hear, but you all may want to do the same if you have an up2 or 3…

Darn! The alarm on this thing did not work this morning and I am late for work.

One product which is going totally downhill with the newer models…

198% sleep. Seriously? Have I been sleep walking? 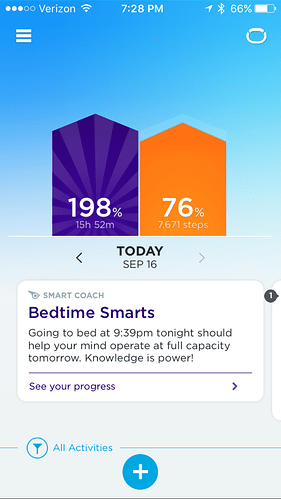 So I have been in bed for nearly 20 hrs today as per UP2 with the latest update! Wrote to their support. Expecting a response: don’t think so! 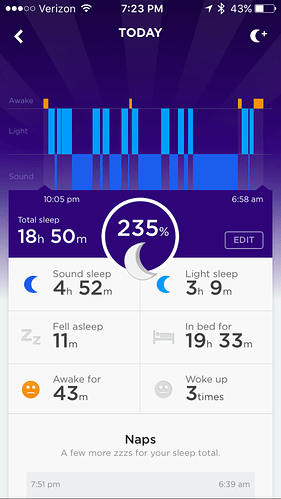 This is driving me nuts automatic sleep and awake are not pushing out like they should. It doesn’t work with either Smartthings or IFTTT. Sent them a customer support ticket.

One small achievement but guess this is the end for me coz of medical reasons. Can’t walk for more than a few minutes at a time past few weeks. Will try to reach the next step and won’t give up. Integrated with ST or not, it’s worth it (not limited to Jawbone but whatever works for you). 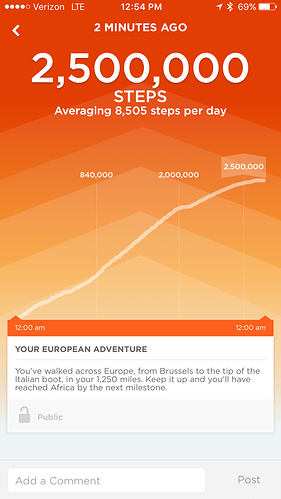 Hey I was thinking of getting an UP, which ones work still if any?

The only one that SmartThings lists is the up24, and that’s in “lab” status, meaning it’s a beta integration. Ones after that don’t have the button so they won’t work.

I had a lot of problems with the official integration, and support ended up suggesting that I use the button controller smartapp instead. That ended up being not reliable for me so I still have the up24 and like it, but I don’t use it with smartThings anymore.

I’d be hesitant to suggest getting a model which is now a couple of generations back just in the hopes that it might work with SmartThings, but if you find it someplace with a good return policy you could try it.

Maybe @jody.albritton could look into it.

Thanks, I wanted to get something for my mom, she is getting old and wanted to add on the security and motion sensing also. Thanks for the suggestions.

I’ve got a Jawbone Up2 and, while it still technically integrates, it no longer has a button.

I can open the ST app and find the device and check my steps. That’s about it though.

There was this discussion and a new app created for use specifically with Tasker and Sharptools:

I just got a Jawbone Up Move and I’m trying to tie it into SharpTools. It doesn’t show up as a thing I can authorize. Am I missing something?

Pretty much there is zero value for UP newer models integration with ST with no buttons to press!

it’s not a gps device. If you take short steps it’s going to be off.

Jawbone pretty much sucked. Had to replace it three times 'coz of broken band (thanks to Amazon). Switched to Fitbit Ulta and much happier with it.

Agree. I had to replace my Jawbones twice before I decided the next replacement was another brand. I replaced my Up24, then had to replace it again and they upgraded me to an Up2, and that died in less than a year.

Going with Withings this time around because it can also replace my watch.