Congrats!
I’ll hit my 500K at the end of March/beginning of April. I’m currently a 14-day streaker (weekends when I’m not working are typically rest days, especially when it’s colder), but am looking to keep that going through this week, too.
I’ll be integrating with ST once I get a V2 hub.

I want to use the Up24 to open my garage by using it as a button controller. The only problem is that the same button press also sets the Up24 sleep and awake modes. Is there a way for SmartThings to detect another type of key press?

@flann321 there is a short press to quieten the alarms, reminders etc. and long press on the up’s for getting into awake, sleep mode etc. but not sure whether there is a SmartApp floating around to capture these like the button controller for minimotes.

Or if this is possible as of now.

Only if you have an iPhone. It’s been broken for Android users for almost a year. Annoyed about it since they show it off during their SmartThings demos.

a short press to quieten the alarms, reminders etc

The short press does not interact with ST as far as I know. It does not report anything to your phone, therefore there is no information being sent to ST. Like you said, it is used to silence alarms. That is all within the band itself.

Yeap… That’s what I thought. I have the up24 hooked to ST but don’t use it with ST at all.

When the price on the Up24 plummeted, I got one to use as a sleep monitor. I like it a lot for that purpose.

The button is hard to push for me, but once a day I can manage it. (For those who don’t know, I’m quadriparetic with limited hand function.)

So I did hook up my Good Night HHA to it, since it’s the last thing I’m doing at night anyway. I have that set up to turn off the pathway of lights from the living room to my bedroom and turn off the entertainment center power strip.

It works well but only if the Up app is open and active on my iPad. Which is fine for my use case but might not work for someone else.

I like it because sometimes my dog is already asleep and if I use voice command for the HHA, it wakes him up.

Since I’m going to put the Up24 into sleep mode anyway, might as well let it turn off the last lights.

BTW, I notice some retailers, including amazon, only cut the price on some colors/sizes, they’re still full price on the black medium ones. So check different size/color combos for best price. I got mine for $65.

That’s a good price, @JDRoberts. I paid around 79. I want to get the up3 (not sure they are already in the market) as it monitors the heart and BP too which I have to monitor.

I actually returned mine today. My Moto 360 does steps just as well as the UP and it does so much more… now where is proper ST integration with Android Wear?

Only if you have an iPhone. It’s been broken for Android users for almost a year. Annoyed about it since they show it off during their SmartThings demos.

Thanks for the great Android mobile app update!

yeeee! great to hear! I’ll pass it onto the mobile team. cheers!

You can use the short press with smartrules.

April, I wish I could capture different types of presses from the Jawbone so I could control multiples switches in the house.

I’m finally able to install SleeyTime Too, but it doesn’t work. Up24 > IFTT > SmartThings works, but only for individual devices… IFTT doesn’t allow phrase or modes.

I’m finally able to install SleeyTime Too, but it doesn’t work.

It works for me. You do know that sometimes the UP app doesn’t sync with the band? Try force closing the UP app, turning bluetooth off and then on, and then open UP to make sure it’s connected to your UP24 band. Then try SleepyTime Too with Sleep and Awake again.

It works for me. You do know that sometimes the UP app doesn’t sync with the band? Try force closing the UP app, turning bluetooth off and then on, and then open UP to make sure it’s connected to your UP24 band. Then try SleepyTime Too with Sleep and Awake again.

Mine works in iOS, but only when the UP app is open and synched with the band. Which is OK for how I use it. Last thing at night I open the app, get the band upload, review the stats, and hit the button that changes my house to my Good Night mode. But I don’t use it for anything else, the timing was too fiddly.

May I brag a little today! 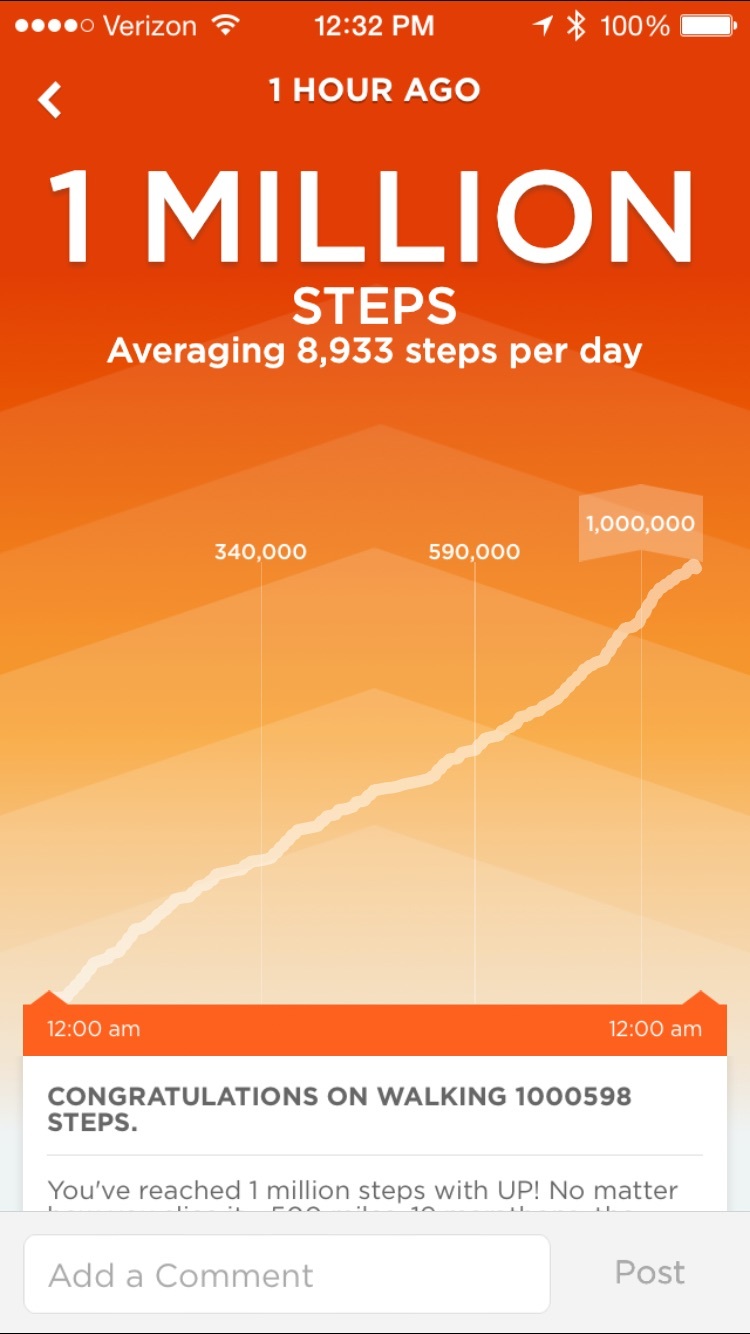 Couple of days back my UP24 end cap (button) fell off and disappeared… Amazon now lists it as discontinued product and promptly credited the price of UP24 (purchased mid-January this year) towards the newer UP2. The new model is much lighter but I wouldn’t recommend it as it stands now.

Yeah I saw those issues when the up 3 first came out, which is why I got the up 24 instead. In particular I can’t do that kind of button tap.

I currently wear the Apple Watch on my left wrist and 24 on my right.

I also like the food logger for the up, which turned out to be usable for me on the iPad. I’m sure there’s something similar in some other app that would work with the watch I just haven’t bothered to look for one.

I really like the watch, and as you know, I’m using it for voice control, which obviously up doesn’t have.

I should also say that because of my very limited hand function, I don’t write or anything like that, I don’t have any issues having the up on my dominant hand. It might get more in the way if I use the hand more, so I can’t speak to that.

I’d stick with Up24 even though they break every six months. Amazon warehouse sells them for $35. My replacement arrived from Amazon Warehouse new but with damaged outer packaging. For the price, the best value out there.